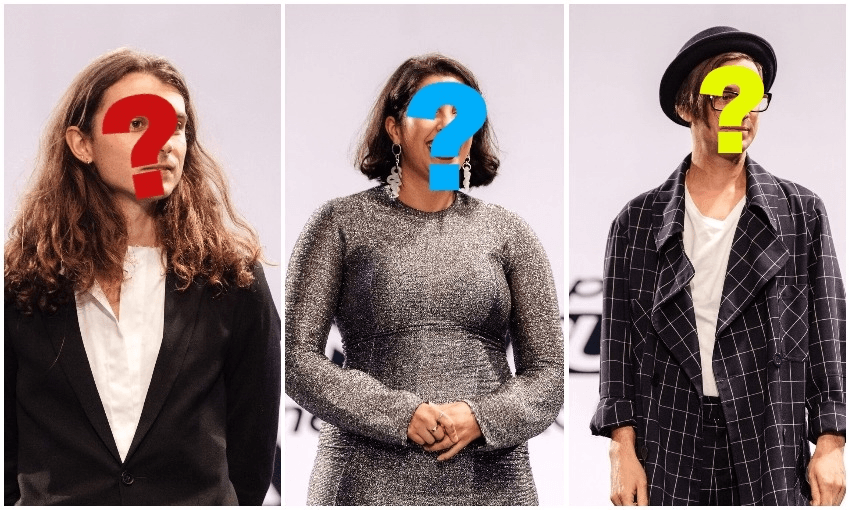 Project Runway Power Rankings, week 12: And the winner is…

In the final episode of Project Runway New Zealand, the designers had to make a whole damn collection. Henry Oliver ranks the results.

First, the show itself.

Overall, I was impressed. I was initially scared that the cast lacked the chops to make it a competitive series: sure, actual skill doesn’t matter that much on these shows – as long as what’s made on the show (be it fine dining food, cakes or gowns) is of a believable quality, the competitors’ skill-level only really matters relative to each other – but it helps bring you back each week. And when it comes to the skills on display on Project Runway NZ, I think we ended up with something pretty good.

As for the judges, I had mixed feelings about Georgia throughout the season but felt like she was starting finding her feet in the last few episodes. And I love Andreas. He’s perfect for the role and the designers really seemed to care what he said (plus, I loved that he called them “mate” in the backstage bits tonight). If they can get a season two, these guys will get better and better. And the designers will get better too.

If good things happen for these designers, more young designers will want to be on the show. In the States, winning the show hasn’t meant that much for the careers of the winners. One winner said it was only really useful career-wise if you wanted to make a line for K-Mart. ‘Real’ fashion people couldn’t give a shit. (Though you still get the $100,000 I guess.) So we’ll see how it plays out here. Will one or more of these designers be a big deal locally in the next few years? Or will they just be people who were once on a reality TV show? Personally, I can’t wait to find out.

Kerry! Duuuuude – you’re late to the final of the show you supposedly want to win? Sure, there’s probably not that much for you to do, but oversleeping on the day of the finale? Unbelievable. Set an alarm! Set two! Watch the Seinfeld episode about the marathon runner and the alarm clock! Do whatever you need to do to be there on time. Unless you don’t really want to be there on time. Maybe you didn’t really want to win. And that’s fine. You’ve got a good job – a job that presumably doesn’t mind when you’re a bit late. I’ve never seen anyone turn up late to the final of the reality competition show they’re in, so that’s a first.

Anyway. This collection makes me want to say all the things I’ve been saying for weeks. Kerry is super skilled – he can sew and pattern the shit out of anything, just look at his suiting – but lacks that thing, that spark, that taste, that would make his clothes more than the sum of their parts.

Every episode except for this one, Kerry’s connection to Karen Walker has been mentioned and I can’t help but think that whatever his talents are, working for one designer for so long means his ideas always end up looking like they could have come from her (or could have had her name on them at least). It’s hard for a mentee to come out of the shadow of their mentor. And being Karen Walker’s patternmaker is not a bad career. But if he wants something more than that, he’ll need to separate himself from that sensibility. Still, he deserved to make the finals and he definitely showed a cohesive collection, but apart from the fluoro suit from last week, and the woot-pattern suit, there wasn’t much to really be inspired by here.

If the purpose of a collection is to display your aesthetic and skill as a designer, Jess certainly did that – for better and for worse. On the positive side, it was full of flair, colour and personality. Jess’s designs, like her personality, shows a lack of filter. And that’s mostly a good thing. She’s got a point of view, she’s got a look, she’s got an instinct, and she goes for it. Her clothes are unapologetic because Jess is unapologetic.

The problem is that she doesn’t really seem to think about the big picture. She just does something, and if she likes it, she moves on to the next thing. There’s little thought about the cohesive whole, or the ‘brand’. She’s not the strongest sewer/pattern-maker (she could go into business with Kerry maybe), and it’s hard to know if she knows when something is good or something is bad – but on the other hand, she’s got a look that’s hers. And she’s amazing at jackets and coats. There’s got to be a good career in that.

(Side note: she’s also a good reality TV show contestant. Perhaps the best of the final three, so bonus point for that.)

My least favourite thing about this show is that it seemed obvious that Benjamin would win from episode one. It seemed immediately clear that he was working on a different level, taste-wise and design-wise. He didn’t just want to make the things he wanted to make; he’d obviously studied fashion, lived fashion, was keenly aware of what was going on out there and what his reaction to it would be. Was everything he made amazing? No, but everything he made was skilled and came from a fashion context, not just a clothes context or a retail context. Fashion, honey, fashion.

Tonight he built on last week’s look in surprising and interesting ways. He used difficult colours and pulled them off. He played on masculinity, femininity, military, Les Mis, safari and fantasy. It was said again and again – he’s got taste, and the skill to bring that taste into life. And his collection is both now and kinda new and definitely cool. Would it be up to Paris Fashion Week? Nah, but for a twenty-something on a local version of a reality TV show? It’s pretty amazing if you ask me.

So what will be next for Benjamin? I think the pressure will be to try and turn this win into a brand, but building a brand is fucking hard. Ask Sean Kelly, the New Zealander who won Project Runway in the US and was a judge tonight. Heard of him recently? Bought his clothes? No, but one day you might. The same will be true for Benjamin. He’s a talented dude, but it’s a long road to somewhere that you and I would recognise as ‘success’. But hopefully that $50K helps him on his way.