Yesterday Emirates Team New Zealand won an ancient and expensive boat race at the most convenient time of day: right before the six o’clock news. Tara Ward was there, watching the TV, as the celebrations began.

If you only like good news, last night was your night. Team New Zealand’s America’s Cup victory created absolute scenes in Auckland’s Viaduct and Waitematā Harbour, and thousands of 1 News and Newshub journalists were there to capture every moment. The dock was rocking and the Viaduct was heaving, and 1 News’ Simon Dallow stood with the sun on his face and pride in his heart, preparing to deliver a news bulletin like he’d never delivered before. 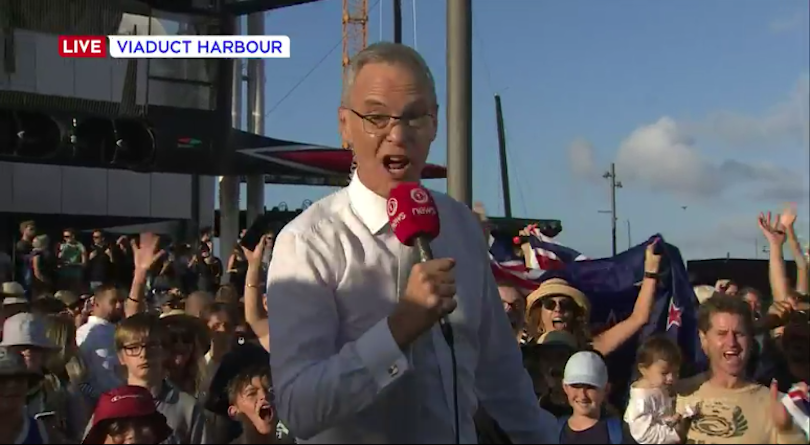 Simon was full of words and they all ended with exclamation marks. He began the bulletin standing by himself, a lone wolf of current affairs in the eye of the celebratory storm, but a rapturous crowd soon gathered behind him. They cheered whenever he spoke, lifting children into the sky and waving in triumph. He couldn’t hear a thing, but it didn’t matter. They were the 12 knot wind beneath Simon’s wings and he was up on both foils, living his best life live on the six o’clock news.

Things were slightly more composed on Newshub, which began by informing us the crowds were so big in the Viaduct that Auckland Council was asking people to stay away. In unrelated news, 1 News reported that mayor Phil Goff was in the Mumm tent getting stuck into the bubbly, while on the water, Newshub reporter Lisette Reymer captured frenzied fans leaping into the sea and police hooning around on jet skis. Lockdown was forgotten, Covid-19 didn’t exist. It was bedlam, and nobody was sorry. As the sailors came ashore, Newshub cut to Mike McRoberts and Sam Hayes in the studio to report the other news of the day. For 1 News, though, nothing else of consequence had happened, and they would ride this patriotic wave of victory until the bitter end. “The atmosphere on board must be stratospheric!” Simon cried. “The buzz is huge!” said Hayley Holt. “The party here is incredible!” Simon continued, in what was proving to be the most remarkable 6pm bulletin since Richard Long shaved off his moustache in the 90s. 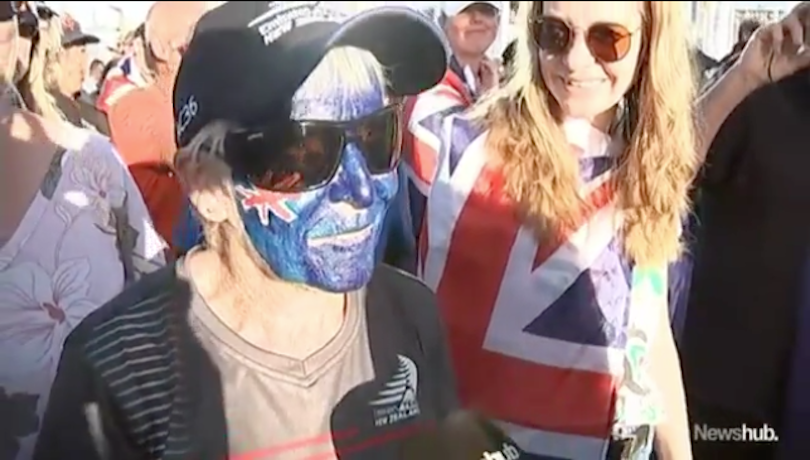 “We’re live around the country! Live across the motu!” Simon said, crossing live to a reporter on an Auckland beach. “You couldn’t get closer than this,” a spectator there reckoned, as a nearby man used binoculars to see the boats. “It doesn’t get better than this,” another 30,000 people shrieked, though the woman eating chicken wings in a Takapuna Irish bar would likely beg to differ. It was St Patrick’s Day, it was St Peter Burling day, and it was the perfect chance for Newshub to throw some retro shade at 1 News. The sun was setting and the nation was frothing, but Simon seemed like he could go all night.  At 6.41pm he crossed to the sports news, because every other item so far had definitely not been about sport. We went briefly to the 1 News studio for a teaser from Dan the Weatherman, but he didn’t return. The weather was scrapped because it will never rain again, while Seven Sharp was pushed aside for the trophy presentation. Even Newshub started to get carried away, showing us shots of hidden champagne bottles and mistaking reporter Mitch McCann for Oprah’s BFF. As Peter Spurling lifted Ye Aulde Mugge, Simon Dallow ran out of superlatives, having spent the last hour explaining this extraordinary vibe to a country that may have also hoped to learn the latest Covid-19 news or the impact of the Whakatāne mill closure. Not tonight, Aotearoa. This was a euphoric celebration of the power of rich people to make things happen, and a tribute to the emotional connection between a patriotic goat and a yacht race. The energy was electric, the atmosphere incredible, and a nation has apparently never been so fulfilled. “It’s absolutely unreal,” our hero Spurling said, and not a truer word was spoken.