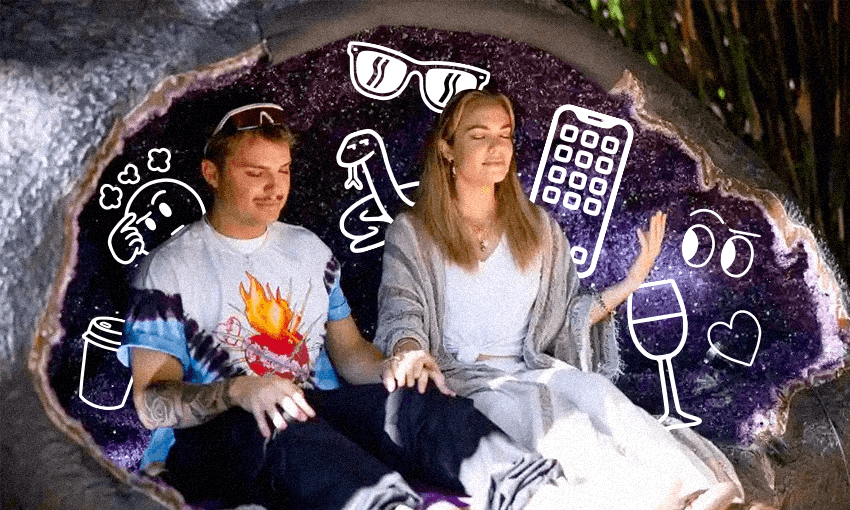 Alex Casey watches Byron Baes, the controversial new Netflix reality show that follows a group of Australian wellness influencers up to… not much.

Among the many moments in Byron Baes where you have to wonder whether or not every character is actually being played by a Chris Lilley type, one stands out in particular. Jade Kevin Foster, who claims to be the most followed male influencer in Australia, crawls into a giant amethyst egg with fashion designer Hannah Brauer. She pads at the “120 million year-old” walls around her in awe. “If the word ‘vibe’ was invented, this would be why,” she gushes. Jade is not so convinced, questioning the validity of carbon dating because “people weren’t around back then”.

“It’s like when they find dragon bones,” says Hannah.

Byron Baes might not be a strong scientific resource, but it does provide a fascinating and often excruciating window into the cushy lives of influencers in the Australian coastal town. “Byron attracts creative types,” singer/songwriter Sarah Tangye explains, “people who want to create and collaborate”. As she drives into the town, her new home after living in the Gold Coast for years, she passes a sign saying “SLOW DOWN AND CHILL OUT”. If we were to localise it, think Raglan or Waiheke.

The energy of both the show and the talent matches this slogan. Everyone from Simba the spiritual healer to “Frimmy”, who runs a boutique airline that plays vinyl and serves cocktails, all talk… very… very… slowly. Compared to the breakneck, glass-smashing drama of Married at First Sight Australia, where two of the contestants seem poised to, frankly, murder each other on network television, it’s a soothing change of pace from our friends across the Tasman.

Perhaps it is because not a lot happens on Byron Baes and the stakes are so desperately low. Three episodes are devoted to the group figuring out whether one person said that another person was “fake” (spoiler alert: they did). The climax of the series happens at a launch for fake tan. There’s a fair amount of meditation, beach yoga, and even an evening sound bath while the partygoers sip champagne, because “music changes molecular cellular levels”. It is, to be clear, all absolutely absurd.

Nonetheless, there is clearly serious money to be made in their online influencer spheres. Jessica, one of the famed “Bell sisters”, runs a fashion label that made $100,000 in the first hour of launching. Jade gained a following of millions after Kim Kardashian posted a photo with him on her Instagram story. He and Jessica bond over their Kardashian Konnection – Kendall wore Jessica’s clothes on Instagram. Later, Hannah gives Jessica a card depicting Kylie and Kendall. The celebrity sisters hover as a spectre over the show, their influence over this generation impossible to ignore.

What struck me the most by comparison to the glitz and drama of observational reality franchises like Keeping Up With the Kardashians or Selling Sunset is that Byron Baes doesn’t appear to want to make their lives look particularly appealing. Nobody seems to ever be having that much fun and their world, like their clothes, mostly comes across as literally and figuratively beige. When Elle – “the most open-hearted person I know” – gets herself 3D scanned as a mermaid to “bring more attention to the coral reefs”, the show feels like it is in on the joke.

Moments later, another motive is revealed – “can you make my boobs bigger?”

The most sympathetic character on Byron Baes is probably Alex, the slightly older talent manager with frosted tips who ices every sentence with a “darl” and isn’t afraid to be honest in a setting that feels quite far away from anything remotely close to truth. He mutters that a creepy sound bath looks like something out of The Handmaid’s Tale, he runs Jade’s Instagram followers through a bot finder and confronts him with the (very funny) results and he uses delightfully Australian references like “you can’t get David Jones talent with Big W money”.

Its a memorable phrase, and one that sums up where Byron Baes sits in the reality pantheon. To translate for a local audience: don’t go in expecting Smith and Caughey’s quality, because you’re going to get something closer to The Warehouse, darl.

Byron Baes is available to watch on Netflix