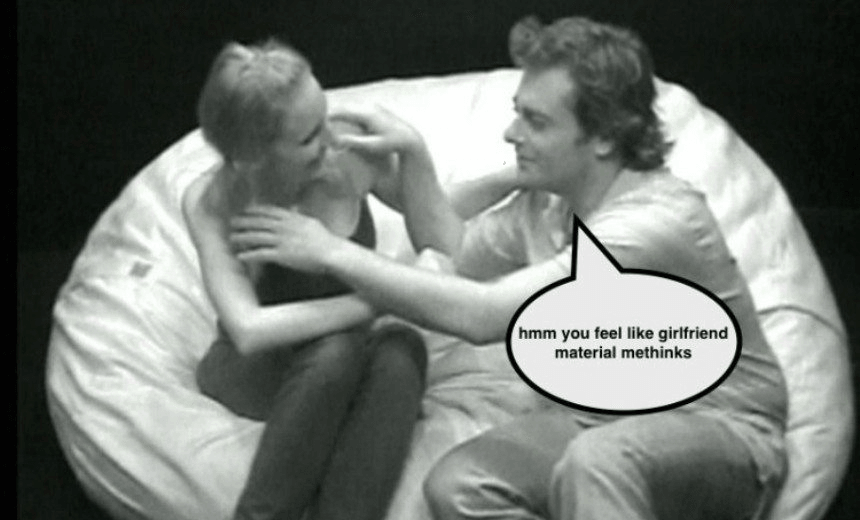 By Zoe Scheltema
Guest writer
Made possible by

As shows like The Bachelor and First Dates finally make their way to New Zealand screens, Zoe Scheltema presents the wonderfully bad dating shows of the United Kingdom.

When you mention the UK these days, people are most likely screaming about Brexit and immigration and Kiwis being banned from doing an OE or whatever is happening re: that. But among these important issues, don’t overlook one of their great achievements, their weird selection of great dating shows. As a country without their own Bachelor series, the UK really does make up for it in leaps and bounds.

Seems like it should be from the 50’s and probably banned.

30 girls are lined up behind podiums, and from what seems like the heavens, a man descends to the stage, usually to bad music, and usually doing some heinous dancing.

The point of the show is that the women then turn their light off if they’re not interested in the weird guy before them. If the guy has ladies with their lights on by the end of the “rounds” (which consist of him talking about his hobbies and doing a ‘talent’ which is usually more dance-related weird stuff), he gets to take her on a date.

If they are lucky enough to have more than one light on, the dude gets to turn off the lights of the girls he doesn’t like in a very Hunger Games style strategy.

If all the lights are turned off, it’s the most ownage you’ll ever witness on broadcast television.

The grand prize? A date to the ‘Isle of Fernandos’, which is literally a made up island for the show, somewhere in the Canaries. It looks very bad.

The premise of the show is a singleton looking for a date, who hasn’t had much luck the contemporary way i.e simply wearing clothes.

After having a chat with the host about their perfect partner, the contestant is presented with six people hidden behind screens. As the screens slowly rise to reveal portions of naked bods, the contestant gets rid of them based on the parts of their body that they are seeing. For example, you’re faced with some peens, you choose the peen you like the best. And that is essentially it.

If you make it to the final round, the contestant also gets naked and they all have a bloody good chat about all their naked areas and then usually hug.

It’s 100% tense and will probably never end up on NZ screens until the year 2456 when the world will have ended and no one is wearing clothes anyway.

The grand prize? They get a date together with their clothes on. Anti climax alert.

This fly on the wall show is set in a restaurant where the only diners are people being set up on their first date with each other. The wait staff are charming and you can tell they’re really rooting for everyone to have a great time with their dates.

Meanwhile at home, we all know the best parts are when the couples instantly hate each other and then have to sit through a whole meal together, as evidenced in the first ever episode of First Dates NZ last week.

The grand prize? The lucky ones are seen getting into cabs together to “continue their night” elsewhere.

Dating in the Dark

A group of guys and a group of gals are put in a house, and have to go on dates with each other. Except there’s a catch; the dates all take place in rooms that are completely dark. Like, Megazone style, pitch black.

Once they’ve gone on a few dates they get to see each other in the light and decide whether or not they want to keep going out by waiting for each other on a very romantic balcony.

The grand prize? Probably not getting stabbed to death in the pitch dark by a person who is literally faceless I’d say.

Sort of like Come Dine with Me but the diner chooses a selection of people whose houses he wants to go to by reading a menu written by the potential date. Not a lot of info given on the actual person in this method but it seems to work.

The menus usually consist of things like ‘The Way to Your Heart Brulee’ and ‘I Am In Love With You Chicken Stew’ which would probably taste pretty alright.

The diner chooses who he wants to keep going out with based on their dining experience at each person’s house.

You find out if you’re a loser by getting a ready meal for one delivered to your house like the ultimate burn that ready meals are.

The grand prize? Not eating a yuck ready meal, obviously.