Carla Crozier, one of Shortland Street’s most memorable villains, is back to wreak havoc in Ferndale. Actor Elisabeth Easther tells Tara Ward why she’s returned to the role – and what’s different this time around.

It’s been 25 years since Carla Crozier waved goodbye to Shortland Street, but fans have never forgotten her. Nobody knows this better than actor Elisabeth Easther, because it’s a role she’s been unable to shake. “She has stuck to me like chewing gum on the sole of my shoe,” Easther says of Evil Nurse Carla, who killed, sabotaged and lied her way to become one of Shortland Street’s most iconic villains.

Now Carla has returned to Shortland Street, popping up in last night’s episode as Dr Carla Summerfield, Nicole’s new counsellor. Carla left Ferndale in 1996 after being committed to a psychiatric hospital, but she’s back, having seemingly turned her life around. The legendary lemon nurses uniform of the 90s has been replaced with a sleek pants suit, and the fancy certificates on the wall suggest Carla is now a successful doctor of psychotherapy. But can we trust Carla, the woman who once persuaded a drunk driver to hoon his mack truck through Shortland Street reception? “I hope they’re real certificates, but it’s hard to say,” Easther says of the new and improved Carla. “I think she’s been in the bin, studied psychology while she’s been there, and she’s been practising without even a skerrick of being out of control.

“She’s been blocking her memories of what happened, and so she’s come back to Shortland Street to try and figure out what happened, which causes a re-unravelment.”

Unravelment might be an understatement given the chaos Carla caused the first time around. During her year at Shortland Street, Carla blackmailed her colleagues and sabotaged surgeries. She married her sister Ellen’s (Robyn Malcolm) ex-boyfriend, faked a pregnancy and miscarriage, and accused Ellen of pushing her down a cliff. She even spiked a pizza with marijuana so Ellen would fail a drugs test. It was a lot of drama packed into a short amount of time, and made manipulative Carla a character that was difficult to forget.

These days Shortland Street villains are remembered for their over-the-top antics, like body snatching and serial killings, but Carla belonged to a different era. Her bullets were psychological, her villainy quiet and cunning. “That’s possibly because I’m a lazy person – just say your lines nice and quietly and then give a little side eye,” Easther jokes, who doesn’t know why Carla became so iconic. “Maybe it was the candlestick.” The candlestick, of course, was the weapon Carla used to kill her abusive husband Bernie Leach. It was Ferndale’s first on-screen murder and took place in typical Shortland Street style, in an earthquake during the show’s 1,000th episode. This storyline – which saw Carla let boyfriend Sam take the blame for the murder – best captured why we loved to hate Carla. We empathised with her as a vulnerable, imperfect woman, but loathed the way she deliberately destroyed the lives of everyone who had the misfortune to know her.

Viewers lapped up Carla’s outrageous behaviour. “That episode about the poisoning of Ellen’s dinner is one of the highest-rating episodes of all time, still,” Easther says, who fondly remembers her time working on the soap in the mid 90s, when an average of 308,000 viewers tuned in every night. “There were parties, we were dangling out of helicopters to raise money for Westpac chopper, I was being pulled out of a pretend wrecked car with the jaws of life in the main square of Wellington for fundraisers. It was fun. Those are the things you never thought you’d get to do,” she says.

“We had such a good time, and it’s the same now, a really lovely group of people working incredibly hard for a common purpose. You don’t stay there if you don’t like it, because it’s hard. I think it’s the loveliest job, and it still is.” ELLEN, CARMEN AND CARLA DURING THE HALCYON DAYS OF THE 1990S (PHOTO: SOUTH PACIFIC PICTURES)

So, why come back now? “Because they asked me!” Easther says. She’s the latest in a line of old-school Shortland Street actors like Theresa Healey and Peter Elliott to return to the soap and pull on viewers’ nostalgic heartstrings. “Loads of people come up and say, ‘Oh my god, you’re Carla! I don’t watch it any more’. It’s a common thing that I hear, and I expect the desire will be to try and get some of the old fans back.” Even though it’s been 25 years, there are signs the Carla those old fans remember isn’t lurking far from the surface.

“She’s a different kettle of fish [now], but when she starts to unravel, I’m like, yeah, this familiar,” Easther says. “You look at the script and go ‘why would anybody do this?’ Then you’re like, oh that’s right, it’s a soap opera.“

The world’s a different place since Easther was last on the show, and now social media means fans can give immediate, unfiltered feedback about their beloved Shorty. Easther plans on channelling Carla to deal with it. “I literally do not care what anyone thinks of me. I don’t have Facebook, I don’t have Instagram. If they want to say whatever, they can waste their breath, it ain’t going to blow on me,” she says. “I might just snarl at people now. If they’re that scared of me, I’ll just growl at them.” 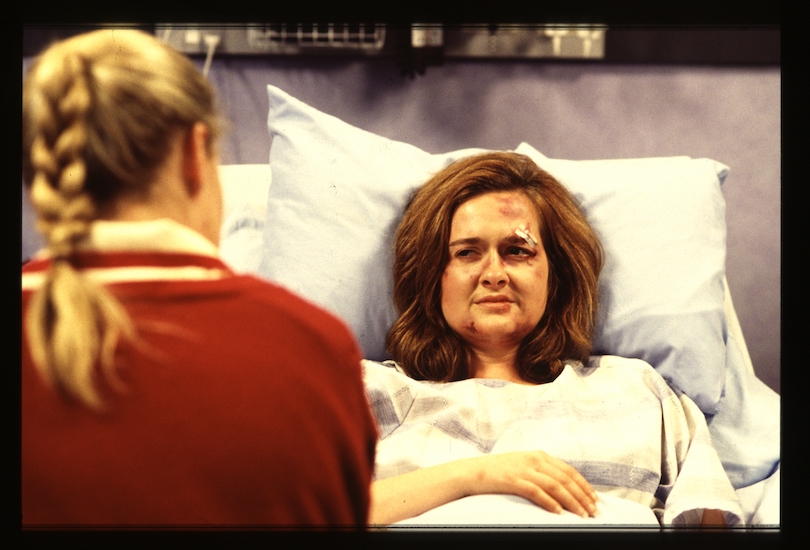 On the other hand, is there the risk that fans might start opening up to Easther when they see her in the supermarket, hoping for a quick Dr Carla consultation? “The funny thing is that Carla does hypnotherapy, and when I was living in London I did a hypnotherapy course. I don’t think people will want me to hypnotise them now, after seeing what Carla’s done. I’ve lost all ability to do anything of that ilk now.”

Having just turned 50, returning to Shortland Street is a full circle moment for Easther, who was 25 when she first took the role. “It’s literally half my life,” she says, and while she found success as a breakfast radio host, playwright, documentary maker and journalist after leaving Ferndale, she appreciates the significance of returning to the role at this milestone moment.

“I couldn’t be more like one of those butterfly pictures when you paint on one side and then smash the painting on to the other side – and it’s a strange reflection, but not the same. “ Don’t tell Carla, but that sounds like a beautiful thing.