We Are Who We Are, the new limited series from Call Me By Your Name director Luca Guadagnino, treats this zoomer love story like it’s paradise, writes Sam Brooks.

There’s a moment towards the start of the first episode of We Are Who We Are that left me genuinely breathless. The preceding hour of the new limited series from Luca Guadagnino, the director of the film Call Me By Your Name, has been largely about mood, focussed more on sensation and feeling than any real narrative. We’ve been following Fraser (Jack Dylan Grazer from It), a capricious teenager whose mother Sarah (Chloe Sevigny, somehow) is the commander of a US military base in Italy. Fraser is dressed aggressively loud, listening to music on his headphones and giving off the antagonistic-slash-angsty vibes that identity-searching teenagers often do.

The moment, though, it’s nothing consequential: Fraser suddenly stops reading a book, picks up his phone and sends a voice note to his friend. Boyfriend? It’s never really made clear. It’s definitely a dude, though. He ends it with the most casual, thrown-off “I love you”. On the surface, it’s nothing big and it’s of so little consequence to the series that the person on the other end of the phone isn’t even referenced again until near the end. The reason it hit me with such force is it’s the first time I’ve seen queer young love expressed so casually onscreen. We Are Who We Are is that kind of show, though. It captures the way that the big milestones can feel so casual, and the casual can feel so momentous, and how it’s near-impossible to distinguish between the two in the moment. Especially if you’re a teenager. Jordan Kristine Seamón as Caitlin/Harper in We Are Who We Are. (Photo: Supplied)

Fraser isn’t the only focus of We Are Who We Are. The second protagonist is Caitlin/Harper, a Black teen who is questioning their gender identity. The series flits between the two of them as they draw closer, their friendship deepening as they realise they’ve found a genuine kindred spirit in each other. Their relationship seems sealed when Fraser, in one of his many moments of uncomfortable behaviour, surreptitiously takes a photo of them and is caught in the act. They lock eyes. From that point on, they’re united in their desire to control the ways in which they see the world and the ways in which they’re seen. After all, what is identity but a way to define the perception of who we are (and hey, isn’t that the title of the show?)

What’s perhaps most surprising, and daring, about We Are Who We Are is how intentionally shapeless it is. In a genre that seems to be constantly searching for answers and resolutions but often failing at it, this series is happy to leave question marks hanging. Plots are often left unresolved, especially among the adults, as are many relationships – most notably the textbook Freudian relationship between Fraser and his mother Sarah,  jam-packed as it is with aggression, repression and obsession. The series gets even less focussed as it moves on, revealing itself to be a much different beast than initially suggested. It’s a love story, yes, but it’s not the love story you might’ve expected at the start. 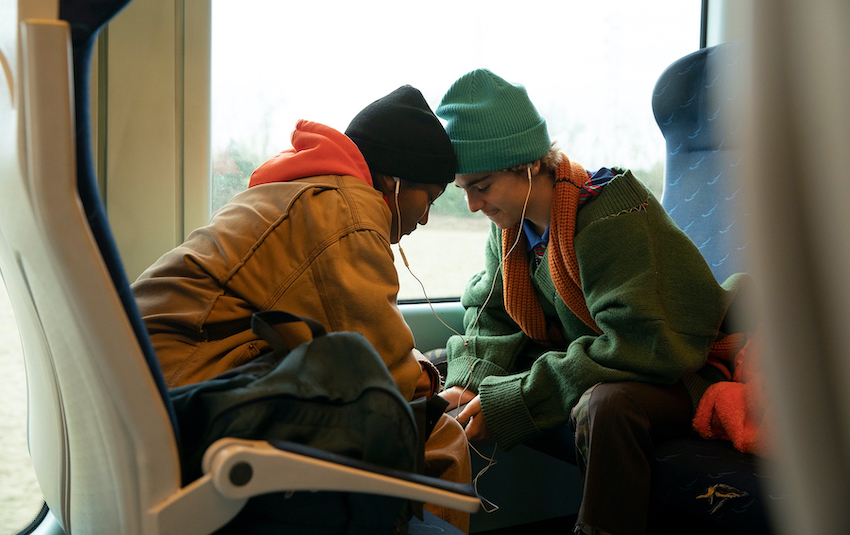 Jack Dylan Grazer and Jordan Kristine Seamón play Fraser and Caitlin/Harper, the protagonists of Luca Guadagnino’s We Are Who We Are. (Photo: Supplied)

If you’ve seen any of Guadagnino’s previous work, which alongside Call Me By Your Name includes the supernatural horror Suspiria and the swoony family drama I Am Love, then you know what you’re in for with We Are Who We Are. It’s ridiculously well shot, with minimal but purposeful dialogue, and a score, courtesy of Dev Hynes, that strikes a perfect balance between classically gorgeous and tirelessly hip. Guadagnino has also pulled two beautiful performances out of his two leads, both relative newcomers. As Fraser, Grazer nails the peculiarities of a weird teenager: notice the way he messes with his hair before going into a party, or how he chews on a library book his crush has recommended. Grazer also captures the very specific theatre that is a teenager’s physicality. His Fraser seems to have too many feelings for his body to contain, so the only thing he can do is lash a gangly limb out here, or just jump up and down. Jordan Kristine Seamón as Caitlin/Harper has a less showy role, but Seamón still manages to let every event, every misstep, play out on her face with heartbreaking intensity. Grazer and Seamón’s performances play off their extraordinary chemistry. We believe right from the start that these two people are inextricably linked, and we understand why that is: they recognise a queerness in each other, and a search for something concrete inside to cling to, like a rock in an ever-shifting ocean of fluidity.

While Guadagnino created the show with others, he’s the sole director of its eight episodes and his specific identity is the lens through which we experience the story. Guadagnino is a queer man in his late 40s and there’s no question that his age influences his framing of these characters and their youthful freedom. As they go through their own specific traumas, big and small (and of course teenagers view their traumas through a sort of funhouse mirror, without the benefit of emotional maturity and hindsight) Guadagnino treats them with elegiac tenderness, as if they’re living in some sort of Garden of Eden, pre-snake. It’s a stylistic choice that verges on fetishisation, but it’s not an unrewarding one. He frames this world like it’s paradise, because the idea of living in a world where you’re free to question and practice your sexuality without prejudice is paradise, especially if you’ve grown up with that prejudice.

It’s a tension that’s familiar from Call Me By Your Name. Look at that film through a different lens and you see a traumatic, abusive relationship. Similarly, I don’t think either Fraser or Caitlin/Harper would view their experiences in the way that Guadagnino does. They couldn’t. That doesn’t make We Are Who We Are a lesser work of art, though. In fact, the way it reflects a modern queer experience through the lens of another generation gives it a fascinating depth. There’s beauty in being able to frame these moments in the way that Guadagnino does, brushing gently over freedoms that would have been unthinkable when he was the age of his characters (again, that “I love you” keeps running through my head), while paying homage to the moments that are huge to any young person, in any generation. The first kisses, the first trips, the first heartbreaks: they’re all captured here, and Guadagnino wraps them up like a precious gift. And what a gift it is.

You can watch We Are Who We Are on TVNZ on Demand.