Kate Winslet descends on television once again to deliver a career-best performance in a cop drama that doesn’t quite deserve it, writes Sam Brooks.

Let’s be up front about this: Kate Winslet is one of the greatest actors of her generation, and the reason you’re interested in Mare of Easttown at all is because she’s in it. The primary hook of the show is getting to see Winslet at all, to be honest. Since her last Oscar nomination, for her many accents in Steve Jobs, she’s been stuck in the sort of middlebrow pictures your older relative might see at the Rialto at 3pm on a Sunday (The Mountain Between Us, Ammonite, Collateral Beauty). Easttown marks her second foray into television, after the acclaimed but not beloved Mildred Pierce, and sees her working with creator Brad Inglesby (The Way Back) and director Craig Zobel (The Leftovers and bizarrely, the cult animated webseries Homestar Runner).

While a movie star doing TV is hardly the career gamble it once was, this is still a major achievement for Winslet. It’s the best she’s been since Eternal Sunshine of the Spotless Mind, which is no mean feat. She plays small-town cop Mare Sheehan, who is haunted by her past, from the still-legendary winning shot she made in a basketball game 25 years ago to the death of her son, which left her with custody of her young grandson, just a few years ago. Most of all, she’s weighed down by her failure to find a missing girl, an unresolved case in which all the leads have gone cold.

Winslet walks around like an open wound, chomping down cheesesteaks and dragging from a vape like it’s her one lifeline, while grumbling in a conspicuously difficult Pennsylvania accent (you’ll be hard pressed to find an article about the show that doesn’t mention her pronunciation of water as “wooder”). She plays Mare as a woman always on the brink of complete breakdown. In the second episode, during a tense, definitely unprofessional interrogation, she’s hit with a verbal barb that’s so over the line that  Winslet’s entire face lights up in shock, as though it’s the first time she’s ever been hurt, as if she’s momentarily forgotten the constant presence of pain in her life. In that moment, the luminosity we associate with Winslet comes to the forefront, and we see just how hard she’s working to bring Mare to life: by tamping down her own light, carefully and with nuance. It’s the kind of work we don’t see on television often, even now when every Oscar winner seems to get their own prestige drama. 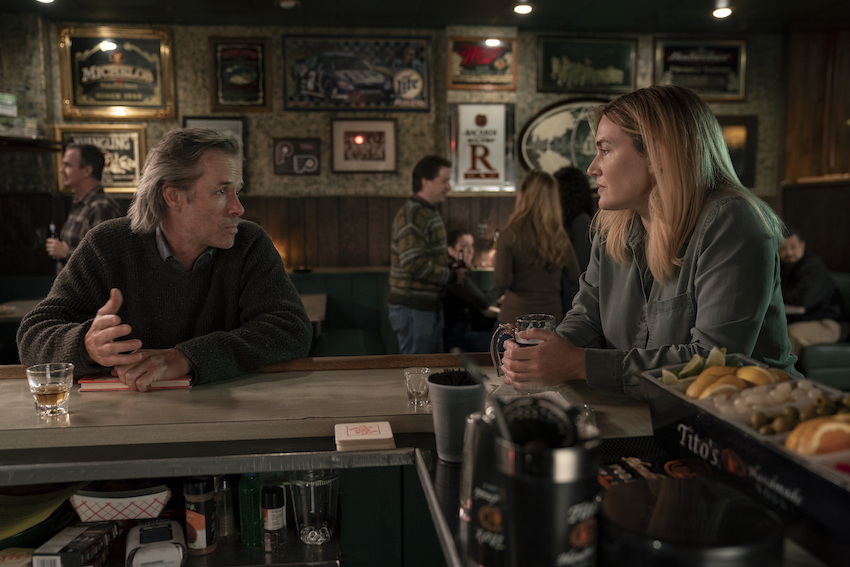 The problem with Mare of Easttown is that beyond Winslet’s standout performance, it feels like just another show to heap on that prestige pile. This is a dour drama about the brutalisation of young women that puts the emotional burden of that brutality on an A-list actress  – just as in Sharp Objects, Top of the Lake, The Act, The Undoing and Big Little Lies, among others. The main thing that distinguishes Mare of Easttown actually ends up working against it: the show is just as interested in Easttown as it is in Mare. That’s a problem, because Kate Winslet isn’t playing everybody. She’s playing Mare.

The people of Easttown aren’t uninteresting, and even when Inglesby widens his lens there are enough twists to keep the momentum going, but nobody else in the case is as compelling as Winslet. Those who fare best do so when they’re playing opposite Winslet, like a spiky Jean Smart (weaponising a wig like a drag queen) or Evan Peters, playing a young cop jaded far before his time. They bring more personality – and, surprisingly often, humour –  to these scenes than we see from the rest of the town’s inhabitants, who seem to skulk around in perpetual sadness. It’s important to depict the truth of these small communities, but this series makes it hard to see the light among the dark.

If you can get past the dourness of Mare of Easttown – and it’s truly to the series’ benefit that it screens weekly rather than being dropped in one grim go – then it’s a worthwhile watch, marrying Winslet’s towering performance with a genuinely tender depiction of the cumulative, communal devastation of grief. It might not necessarily be a pleasure to watch, but it’s not unrewarding to see one of the biggest stars of our time prove, once again, that she’s also one of the best actors.

The first episode of Mare of Easttown arrived on Neon last night, and lands weekly hereafter