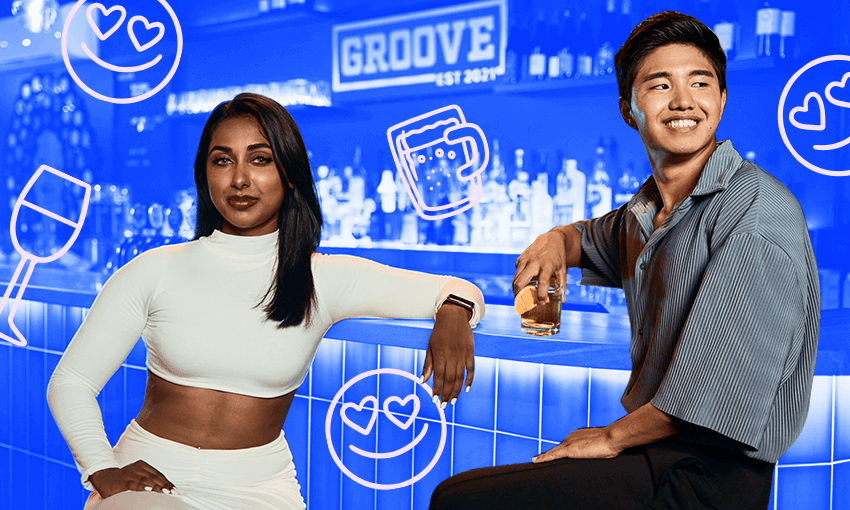 On The Ex Best Thing, ex-partners choose each other new lovers. What could possibly go wrong? Tara Ward finds out.

The premise of TVNZ 2’s new dating show is either incredibly bonkers or absolutely genius. Possibly it’s both. The Ex Best Thing follows former couples as they try to find the perfect match for their ex-partner, based on the highly scientific assumption that no one knows you better than the person you were last romantically involved with. They loved you at your best, they spurned you at your worst. Would you trust your ex to put their own ego aside to find you happiness?

The potential for absolute chaos feeds the tension running through The Ex Best Thing. What if one half of the couple isn’t over the breakup? What if a jilted lover exacts revenge by setting their ex up with someone awful, or what if they discover that their loins still burn with an insatiable yearning for what once was? Awkward? We’ll give you awkward.

Thankfully – or sadly, depending on which end of the love chaos spectrum you fall on – the ex-couple in episode one of The Ex Best Thing arrives with nothing but good intentions. Marketing director Sabby (last seen on Moses Mackay’s season of The Bachelor NZ) and Ku (a filmmaker about to step into the weirdest reality rom-com ever) broke up over a year ago. We meet them as they reunite and begin this adventure by rehashing everything that went wrong in their relationship.

She says he dumped her the day after her friend’s funeral, he says she faded him out of her life. Their relationship is a Taylor Swift song waiting to happen, and for a couple who couldn’t communicate while they were together, Sabby and Ku open up like one of Moses’ roses. Sabby tells Ku he needs to communicate more, because “this isn’t The Da Vinci Code”, but Ku says nothing. He is Tom Hanks at the Vatican, if Tom Hanks was trying to choose which five people should get it on with his ex-girlfriend.

First, Sabby – who is open to dating both men and women – and Ku select the singles they’d like their ex to meet. They watch a selection of mind-boggling introductory videos, including one woman who says her ideal date involves lying on the floor in a bird sanctuary covered in bird seed, and someone who wants their partner to take charge and “sort stuff out”. That’s love in a nutshell, mates. All we want is someone who will happily nibble our birdseed while also remembering to fill the car up before the empty light comes on.

After a hectic speed-dating event where Sabby and Ku interrogate five singles on their ex’s behalf, they each invite the two most suitable candidates to join them in Queenstown. Our ex-lovers meet on a jetty in the pouring rain to discuss their choices, and if this was a rom-com, this would be the moment Sabby and Ku realise they’re destined to be together. Again, this is not the Da Vinci Code, the most famous rom-com of all, and Sabby and Ku must look for love in other outlandish places like a vineyard bunker or on a jet ski.

The exes’ knowledge of each other is tested on their dates. Sabby meets Ku’s first choice, Olympic swimmer Lewis Clareburt, who proudly reveals he does “all four strokes” in the pool. Ku goes bungee jumping with Sabby’s choice Kim Mi, and while Sabby and Lewis struggle to connect, Ku and Kim Mi quickly bond over the terror of launching themselves off a bridge with nothing but a piece of elastic tied to their ankles.

So far, so Sabby. She confirms she knows exactly what Ku likes in a partner with her second choice Dr Margaret, while Ku redeems himself with his second selection for Sabby, rugby league player Stevie. Stevie makes Sabby giggle and she tells him a rude joke about getting 69 DMs a day. Tom Hanks probably doesn’t even get 69 DMs a day, so colour me impressed.

Sadly, love isn’t all jet skis and junkets, and Sabby and Ku must decide which one of their ex-partner’s choices they’d like to get to know better. Sabby chooses Stevie, Ku chooses Kim Mi, and both exes are thrilled. “I definitely feel like I’ve upgraded,” says Ku, ever the gentleman. This risky venture has brought great returns, proving that maybe our exes do know us best. Or, maybe the secret to finding everlasting love is simply dating someone whose name starts with the same initial as yours.

Despite there being no passion in The Ex Best Thing, Sabby and Ku made each other happy and became closer in the process. The whole adventure was sweet and delightfully low-stakes, but did it last? One month later, only Ku and Kim Mi are still together, and it’s going so well that Sabby reckons she’ll be invited to speak at their wedding. Stranger things have happened.

The Ex Best Thing screens on Thursday nights at 8.30pm on TVNZ 2 and streams on TVNZ OnDemand.