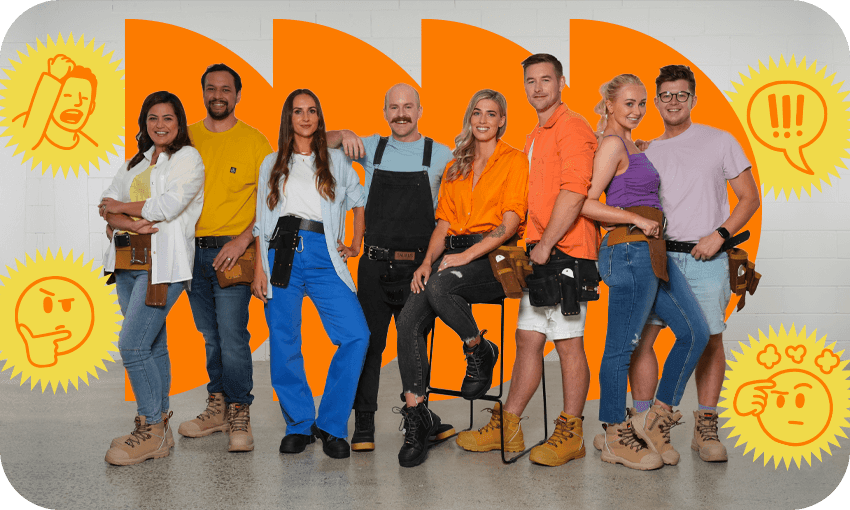 Has The Block NZ redeemed itself?

The long-running reality favourite has had a few renovations. And we’re not just talking about the theme song.

Aotearoa has been watching The Block NZ for 10 seasons now, so it’s high time they did something different with the show that isn’t just experimenting with apartments (gasp!) or letting the live auction crap itself (shock!). This season has welcomed back former contestants for a shot at redemption, but the format itself appears to have undergone a few licks of paint and a bit of a sand down. Here are 10 key takeaways from week one of The Block NZ: Redemption.

Look, it’s still Auckland, but at least you can see a sliver of ocean that suggests a world exists beyond Auckland (unlikely). Mighty Orewa is not only the home of a shop called Charisma Fashions, it’s also home of Austin Powers impersonator, Orewa Walk of Fame custodian and Auckland mayoral candidate Gary Brown. If you wanted more “wow” factor than that, how about the fact that Edmund Hillary’s DAD planted some PINE TREES on the BEACH. If you’re not dabbing your tears with a fiver right now, can you really call yourself a true patriot? / Alex Casey

Big Bad Bonham is back, baby

The welcome return of Jason Bonham is no slight against last year’s judges (Anne-Marie, I love you like liquid nails loves a clean surface) but in a competition that rewards safe interior design, Bonham’s spicy commentary will be the spark that keeps The Block NZ flame burning. We could say he’s the colourful feature wall in an otherwise predictable guest bedroom, but given how much he loathes feature walls, we’d better not. / Tara Ward

There are way more candid moments

Nothing makes my heart sing louder than a reality contestant flubbing a line or saying something humiliating and saying “cut that out” on camera. Unfortunately those three words seem to guarantee that footage will make the final cut of The Block NZ: Redemption, as over the first three episodes we saw a range of classic bungles, including Stacy saying “get your G into A”, a contestant wearing a bedsheet in an extremely questionable fashion and Chloe and Ben proudly discussing “passing the bud”. I’ll take my chucklesome moments anywhere I can these days, and this season appears to already be jam-packed with them. / AC

The Block NZ has gone rogue with the editing skill-saw and cut itself down from four episodes a week to three, and it might be the best reno it’s ever done. It means less Block bloat, fewer stupid challenges and less time watching paint dry, and I bloody love it. A room reveal in only three nights? Be still, my beating heart. / TW

Stacy and Adam were the villainous millennials of their season for no real reason other than the fact they mounted way, way, way too many scary hands on their lounge wall and it reminded me of that bit in Labyrinth that I have spent 25 years trying to forget. This time around they’re just as detail-driven and cutthroat as ever – Stacy even steamed the duvet cover, the pyjamas and the robes for crying out loud! Who said millennials were lazy? / AC

The Bank of Mark has closed

Mark Richardson has finally realised The Bank of Mark was a wokester socialist experiment that has no place in a show built on the glorious foundations of the free market, and he’s closed the lending loophole for good. This means contestants will no longer be able to dip into their auction reserves to pay for building work, and they’ll have to budget like they’ve never budgeted before. Have any of them budgeted before? Good luck to one and all. / TW

The week’s challenges began with Ben doing a massive manu into a pool of mud and ended with Chloe somehow winning the portrait challenge for her socially-distanced Mark Richardson masterpiece. A Frankenstein’s monster of Team Blue and Team Purple from the Hobsonville Point season, Team Blurple are proving themselves to be tough competitors when it comes to all mud and paint based challenges on the show. But popping a big mud manu doesn’t win you The Block NZ, or does it? We’ll have to wait and see. / AC

Builder Marty is back

Scottish Builder Marty last graced our screens in 2015, when he was almost deported from the country mid-season after some kind of immigration kerfuffle. His strong accent means we might struggle to understand anything he says, but nonetheless I would happily watch three episodes a week of Marty simply pointing at ceiling insulation while rolling his r’s incessantly. You want redemption, Aotearoa? This is what it looks like. / TW

Quinn and Ben are still great

The couple that have the most to prove this season are lovebirds Quinn and Ben, who made history as the first couple to announce their pregnancy on The Block NZ. That Block baby is now seven years old, the world has changed a hell of a lot, but thankfully good old Quinn still can’t choose a paint swatch to save her life. She painted several thousands scraps of wood various shades of Shrek green and my heart sang. Ben scratched the paint with too-rough sandpaper and I cheered. Their endlessly cute confusion feels like coming home. Also: they have a love story for the ages (met at a sandwich shop) and they seem to support each other through thick and thin (she gave him a 10 for his objectively terrible lizard art). The people’s prince and princess. / AC

And there’s a new theme song

Eagle-eared viewers may have noticed that the theme song changed subtly last year to an elongated (Taylor’s version), adding a whole extra “na na na na naaaaa” verse. This year, the whole soundscape of The Block NZ has been cut up and destroyed by DJ Sir-Vere [citation needed] as we welcome a BRAND NEW new theme song. I don’t know much about music, but I can safely say that the song sounds like someone playing the vinyl of the old theme song at half speed while rocking out with one of those groany back-scratcher $2 shop things. All I can say is, I hope the Silver Scrolls are listening carefully. / AC

For more on The Block NZ, follow our reality TV recap podcast The Real Pod on Apple Podcasts, Spotify or your favourite podcast provider.