Australia Week: Calum Henderson looks back on the pinnacle of Australian television: the time a dog had a dream on Neighbours.

Can dogs dream? Not according to Joe Mangel from hit Australian soap Neighbours. “Dogs don’t dream, Tob,” he told his son during one famous episode in 1990.

Little did he know how spectacularly wrong he was about to be proved. What happened next is probably the greatest moment in Australian television history: Bouncer’s Dream, a minute-long dream sequence from the point-of-view of a golden labrador retriever.

Australia’s longest-running soap, Neighbours has chronicled the lives and loves of the residents of Ramsay Street, a cul-de-sac in the fictional Melbourne suburb of Erinsborough, since 1985. Bouncer’s origins can be traced back as far as the following year, and the introduction of a character called Mike Young – played by teen heartthrob Guy Pearce.

Bouncer wasn’t the first dog on Neighbours. That was Basil, a terrier owned by a character called Lucy Robinson. The same year Mike arrived on Ramsay Street, Lucy fell down a drain and went temporarily blind.

Her eyesight came back just in time for her to witness one of the worst things that’s ever happened on a soap: in 1987, on a day out at the beach, Basil drowned. Mike’s efforts to rescue the dog were in vain. Wracked with guilt, he went to the shelter and got Lucy a labrador puppy, which he named Bouncer. This puppy would go on to become one of the all-time great TV dogs. Bouncer’s time on Ramsay Street was unusually eventful – he lived with three different families, was in a traffic accident, ate poisonous mushrooms and saved Madge Bishop’s life by calling the fire brigade when her house went up in flames from a chip pan fire.

After Lucy left to go on her OE, Bouncer ended up living in the care of loveable larrikin Joe Mangel at 32 Ramsay Street. Rosie was the next door neighbours’ border collie. “All he does these days is sit around and dream about her,” Joe’s son Toby remarked just seconds before the famous dream sequence.

The whole thing starts with Joe’s wife Kerry rummaging through a pile of video tapes. “Do you mind if I tape over this one?” she asks. “As long as it’s not last year’s Grand Final,” Joe replies without looking up from his newspaper.

“Looks like you and I are the only romantics in this household,” Kerry says to the dog. “Bet you wish it was you and Rosie getting married,” Toby adds. Kerry turns to her stepson and, as if romantic love between two dogs is the most normal thing in the world, asks him: “do you really think things are that serious between them?”

“Yeah,” Toby replies. And he’s right – all the proof you need is in Bouncer’s dream.

The heavily vignetted sequence shows Bouncer and Rosie together in an idyllic meadow, surrounded by brightly coloured flowers that look like they’ve been borrowed from the Playschool props department. Bouncer is wearing a shirt collar and little black bowtie, and keeps putting his paw on Rosie’s head. 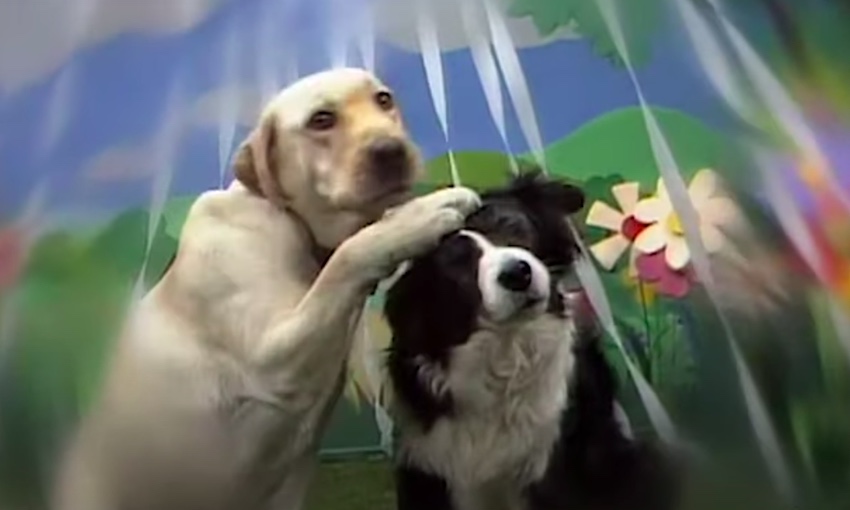 It is clear the dogs are in love (Photo: YouTube)

The shot artfully pans through the flowers before arriving upon a litter of puppies all eating from the same bowl. Bouncer and Rosie look on from the doorway of their kennel, above which a hand-painted sign bears the inscription: “HOME SWEET HOME”.

Can dogs dream? Experts agree they can, and do. What do they dream about? Nobody knows for sure, but it’s suspected they usually dream about the same things they enjoy doing in real life. Could a dog really dream about getting married? It’s unlikely they understand or agree with the concept, but it also doesn’t seem entirely out of the question.

What we do know for sure is that Bouncer’s Dream represents a golden era. Certainly for the Mangel household – a couple of months later, Kerry was accidentally shot dead while protesting a duck hunt – but also for Neighbours and Australia in general.

In its 36-year history, Neighbours has had plenty of memorable moments: a plane crash, a tornado, a guest appearance from Shane Warne. There have even been other dream sequences. But none of these moments have ever come close to the cultural impact of Bouncer’s dream.

Bouncer died in 1993. In 2015, Lucy Robinson – long since returned from her OE – adopted a stray dog, which was found to be a direct descendent of Bouncer. She named it Bouncer 2.

In the latest episode of The Real Pod, Alex Casey and Jane Yee recap a week of girls on the outside, girls with glam sides and girls with kaleidoscope eyes on MAFS AU. Subscribe and listen on Apple Podcasts, Spotify or your favourite podcast provider.