Another year, another sweet romantic ditty filmed in the land of the long white cloud. But how accurate is the NZ depicted in A Love Yarn? Sam Brooks investigates.

“A small-town wool shop owner finds herself at a crossroads, when her business is threatened by a handsome American auditor.”

Pump this treacle right into my veins! I am on the record about both loving and making gentle fun of these sorts of films. There’s nothing better than a film clearly spun out of a tagline by producers who presumably want to shoot in New Zealand because it looks so good.

A Love Yarn, a Hallmark movie currently streaming on TVNZ OnDemand, is this year’s version of the 2019 Netflix romcom Falling Inn Love, a film that was allegedly set in New Zealand. Replace Christina Milian with our very own Anna Hutchison, replace the inn with a yarn shop and you’ve got a conflict-free, comforting way to spend 86 minutes of your life.

As with similar Hollywood depictions of this country, A Love Yarn’s New Zealand is somewhere between fact and fantasy. Some of its Kiwi elements border on comedic, some border on downright weird, but, thankfully, nothing borders on offensive. The most objectionable thing about A Love Yarn is the stretched double entendre in the title.

So here’s the rundown of what this quaint tale about a woman who runs an artisanal yarn store called “Homespun” (groan, moan, etc) gets right and wrong about New Zealand.

Nothing locates us in a world like getting the lingo right. Early on in the movie, Aunty Ida (Annie Whittle, delightful) informs Sam (Simon Arblaster, Probstian), the real-estate auditor from somewhere in New Yawk, that he might want to get his “gummies” on if he’s to examine the sheep farm.

Now we Kiwis all know what gummies are! They’re gumboots, of course! But easier to say because your mouth doesn’t have to make the shape that creates the plosive B sound!

(Disclaimer: I straight up thought this was a bonkers colloquialism that the film had made up, but 11 of my coworkers consider it a widely known abbreviation. Teacher, thy name is A Love Yarn.)

WRONG: A dude seriously expected his girlfriend to buy him rugby boots The face of a man who wants his gumboots. (Photo: TVNZ)

Early on in the film, yarn shop owner Sophie is warned of the sweater curse by the rest of her knitting group. Namely, that whenever they make a sweater for their significant other, that other promptly leaves them. Of course, because every curse, proverb and rumour in a film like this ends up being 100% fact, she ends up giving her boyfriend a hand-knitted merino sweater that I would do many, many illegal things to get my hands on.

He rolls his eyes and says he wishes she would’ve bought him some rugby boots! Absolutely not! No dude, especially not a dude who is in a relationship with a woman who runs a yarn store, wants her to buy rugby boots for him. He would buy them himself. He would absolutely love a merino sweater! Especially this one, which seems to have the magical ability to perfectly fit four different actors with four completely different body types.

It’s always nice to see a bit of te reo in these films – even if this feels like it was spliced in in post. Good on you, Sophie/Anna Hutchison, for excellent pronunciation! 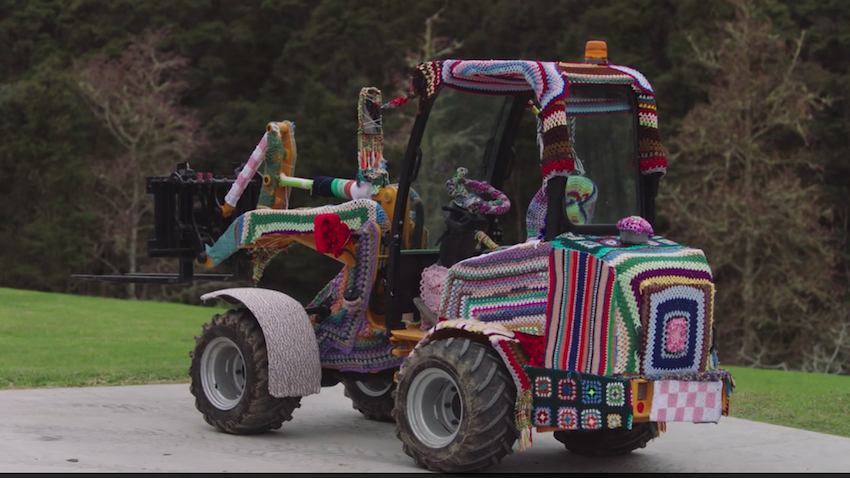 No, it’s not really explained in the film, but I hope some art director had fun with it and that it never, ever got wet.

At one point, Sam suggests that Sophie carry yarn in her car just in case she wants to decorate a tree with it. She laughs this off kindly, rather than hearing it as the absolutely unhinged thing that it is. Why would anybody do this? Why would you suggest this? Why joke about it? Terrifying.

There’s maybe more sheep in A Love Yarn than I’ve seen in any New Zealand film since Footrot Flats. This makes sense, given that a big chunk of the film is set on a sheep farm with a mill attached to it. As a result, there are lots of sheep! There are even cute lambs. Even I, a heartless critic who takes glee in looking for holes in a largely harmless made-for-TV movie, am charmed by seeing a little lamb roll around in someone’s arms.

At one point Sam says that sheep exports make up over 4% of New Zealand’s GDP. Which is … wildly not true. A simple look on the same internet that the writer of this film has access to shows that while agriculture contributes approximately 5% ($10.6 billion) to the country’s GDP, only $759 million of that comes from raw wool – assuming that Sam wants to continue running the farm and using the sheep for their wool. (A Love Yarn is, unfortunately, not quite dark enough for Sam to suggest they pivot into meat, in some sort of bizarre, reverse-Cruella type deal.)

That does, however, bring me to another issue with the film.

HUH: Sam’s abilities as a photographer

It turns out that Sam, the heartless real-estate auditor, is not actually as bad as he seems! He wants to be a photographer. Unfortunately, this is the best photo he takes of his love interest: WRONG: Any real-estate auditor would absolutely break this up to sell it off

The main conflict in the film is, again, Sam wanting to sell Aunty Ida’s farm because it’s not making enough money and she wants to go teach knitting in Mosgiel. Yes, Mosgiel outside of Dunedin. I don’t want to disparage that location any more than it already has been, but I wish Aunty Ida all the best with her knitting lessons, and suggest that she learn how to use those needles in self-defence.

Also, somehow this farm makes enough to not only sustain itself, but maintain a symbiotic relationship with the nearby town – a relationship painfully described in a monologue about self-sustainment, which just makes me feel like everybody lives off each other’s artisanal bread and generational wealth (spoiler!). And while it’s quite unclear where in New Zealand the town in A Love Yarn is, the vibe is definitely Auckland-adjacent. Given the current cost of housing in our biggest city, Sam is clearly not just very bad at economics/research, but bad at his job. He should definitely subdivide the farm and sell it for development. This will be prime residential real estate material in a few years, Sam! Imagine how much yarn Sophie could buy with that. She wouldn’t even have to spin it herself.

RIGHT: The only way this person can afford to reach her dreams is by having a rich parent

The final twist of the film is perhaps the closest it gets to reflecting the real world.

Realising that Sophie is never going to make enough money with her yarn shop and knitting classes to buy the mill from Aunt Ida so she can keep making yarn, Sophie’s mother gives her a massive amount of money out of nowhere.

Sophie’s mother made her fortune in – you guessed it – real estate! It’s OK, though, Sophie can repay her in knitting lessons. And thus, Sophie becomes the subject of every real-estate story that lures you in with the headline “Find out how this 25-year-old bought their own house”. Spoiler: It was generational wealth!!!

Also, she ends up with Sam and lives happily ever after, not having to repay her mother a cent. After all, it’s called A Love Yarn, not An Interest-Free Loan.

You can watch A Love Yarn on TVNZ on Demand.