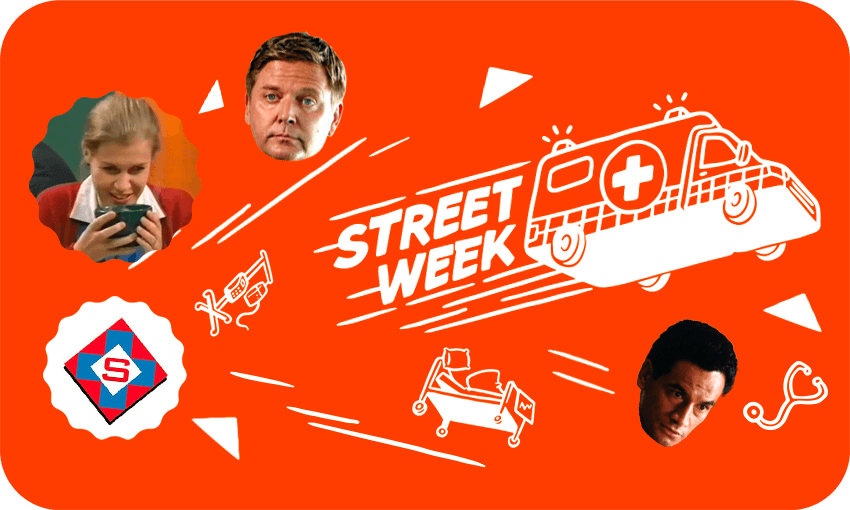 The classic New Zealand TV soap is turning the big 3-0, and we’re celebrating by dedicating a whole week to it. Alex Casey introduces Street Week on The Spinoff.

Earlier this year I chatted to Nick Malmholt, former head writer and current executive producer of Shortland Street, about the pivotal role he had in crafting the immortal line “please tell me that is not your penis”. Towards the end of the interview, he began to get particularly philosophical about Shortland Street and the role that it has in reflecting and challenging its audience in Aotearoa. This is what he said:

“This is New Zealand’s show. All the writers, all the storyliners, the whole team, we all live in this society and we are all being affected by and pushed around by the same forces as everyone else. We want to constantly try to bring that immediacy and that relevance and that true social texture to everything we do. We don’t always succeed at it, but we are always trying. You don’t want Shortland Street to be a television show about television, you want it to be a television show about the people that are watching it.”

I’ve checked back in with our nightly soap recently, and was instantly reminded of Malmholt’s mission statement above. Over the course of just a few episodes, the show traversed everything from Desi’s struggles with being a “plastic Māori” to a #MeToo scandal involving an anonymous online platform akin to Behind the Glass Ceiling. There were conversations entirely in te reo Māori, there were conversations about cancel culture and cultural divides, and there was a conversation that ended with a woman being shot with a nail gun – this is a soap, after all.

Shortland Street turns 30 years old this week, and we want to celebrate by taking a look at New Zealand’s most enduring soap from a bunch of different angles. Longtime readers of The Spinoff may recall this is not our first Street Week – in 2014 we celebrated the show in a similar fashion. Perhaps the most notable content (I beg of you please don’t read the old stuff) was David Farrier’s incredible Real Talk interview series featuring Benjamin Mitchell (TK Samuels) and Cameron Jones (Dallas Adams), shooting the shit on a Shorty hospital bed.

This week we’ll be publishing a bunch of fun lists and classic Spinoff stories, including a visual history of the Shortland Street uniform and a deep dive into Chris Warner’s tangled web of wives, flings and offspring. There’ll be reviews of Ferndale’s finest eateries, interviews with Ferndale icons and a breakdown of the theme song from the woman who sung it herself. We’ll have some more thought-provoking stuff too, including producer Oliver Driver joining Duncan Greive on The Fold.

That said, it can’t all be sitting around the campfire and singing ‘Anchor Me’ in perfect harmony – we’ll also be looking at the most complained-about episodes in Shortland Street history, and what they say about society’s reaction to the show, and the show’s reaction to society. And to leave things on a real cliffhanger, Chris Schulz will ask a question that few have dared to utter publicly: what would happen if Shortland Street ended?