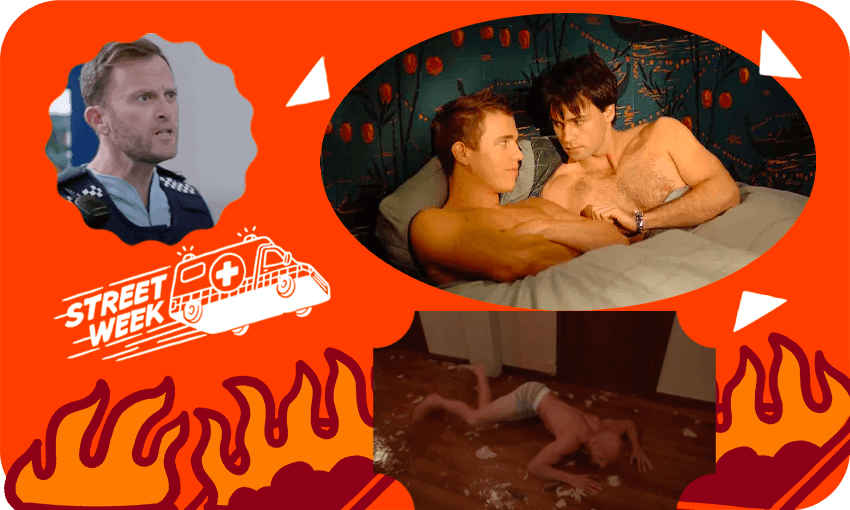 Poo-namis and profanities are just the beginning – we delve into the BSA archive to remember the Shortland Street moments that made people really mad.

Shortland Street has been pissing people off for 30 years, and no one knows that better than the Broadcasting Standards Authority. The BSA is the agency responsible for developing and upholding broadcasting standards in New Zealand, which basically means they’re the Big Mum of television. They investigate viewer complaints to find out if their broadcaster kids have misbehaved, and decide who needs a telling off and who should be sent to their room to think about their actions.

Since Shortland Street’s first episode in 1992, the BSA has investigated and ruled on numerous complaints about the content of the long-running soap. Viewers have objected to everything from sex and swearing to the depiction of mental illness and misuse of firearms. Only four complaints have ever been upheld, and all of those related to violence and sexual content deemed inappropriate for a PGR rated time slot.

The topics of BSA complaints show that while social attitudes have shifted over time, for some viewers, they haven’t changed at all. Pearls for clutching at the ready, here’s 10 of Shortland Street’s most memorable BSA complaints from the past three decades.

“The first episode of the series Shortland Street was broadcast by Television New Zealand on TV2 at 7.00pm on 25 May 1992. One scene saw a couple kissing and apparently entering into sexual intercourse.” So began Chris Warner’s journey down the free love freeway, after his episode one romp provoked one viewer to complain that this new series was denigrating marriage, promoting adultery and breaching good taste and decency.

Verdict: Not upheld. Nothing to see here, just Dr Love starting as he meant to go on.

Drew and Harper’s poo-nami is the stuff of Shortland Street legend, but it wasn’t the uncontrolled torrent of shit that provoked a complaint. One viewer was more incensed about Harper’s use of “oh Jesus” to describe the sea of raw sewage in her hallway, uttered during a Shortland Street promo that popped up before the 1 News weather.

Verdict: Not upheld. The BSA ruled that such poo-nami related swears are “commonly used as exclamations in our society”. Nobody mention the Jim Hickey cumburger incident, OK?

Hospital receptionist Gerald got into quite the pickle when a sexual encounter with partner Lindsay went awry. A viewer was appalled to see “a pair of men undressing, getting in to bed and one disappearing to obviously start oral sex”, believing Gerald’s giggle suggested “Lindsay obviously latches onto something more than a toe”. The scene, which saw Lindsay put his head under the covers, ended with Gerald “nervously jerking” his knee and giving Lindsay a bleeding nose.

Verdict: Upheld. The BSA agreed that this content was inappropriate for broadcast during children’s normally accepted viewing times, and that Shortland Street could have been more discreet in its depiction of adult sexual content.

Freaking, fricken or fucking? Nobody – not even The Spinoff – was sure which f world was uttered by  a police officer during this heated scene. Closed captions suggested the character said “you’ve got no freaking idea”, but a complainant believed they heard a much naughtier word.

Verdict: Not upheld. The BSA was having no freaking part of this.

Shortland Street returned from its summer hiatus with an episode that included a variety of threatening scenes. One viewer complained that the violence – a character being hit with a hammer, being buried alive and a kidnapping – was disturbing for children and exceeded the PGR rating.

Verdict: Upheld. The BSA agreed the episode was unsuitable for children even when supervised by an adult, and that it didn’t carry sufficient warning. Christmas in Ferndale has never been the same since.

Verdict: Not upheld. Threesomes are not illegal.

A viewer objected to scenes she believed depicted animal cruelty, including “dog fighting, the suggestion that kittens were fed to fighting dogs and throwing an unwanted kitten from a bridge”.

Verdict: Not upheld. Because the activities described by the complainant weren’t shown on the telly, the BSA was cool with it. Also, muffin man Lionel Skeggins rescued the kitten in question, meaning no fictional animals were harmed in the making of this fictional storyline.

When Shortland Street showed two characters smoking and dropping cigarette butts on the ground, one viewer believed the show was setting a bad example. They argued that dropping butts is littering and is therefore a fineable offence.

Verdict: Not upheld. Littering does not breach broadcasting standards.

Two complaints were received after a conversation in which new hospital CEO Te Rongopai described hospital management to colleague Esther as “puffed up, privileged Pākeha men drunk on control, terrified of change…we are the future Esther, not them.” The two complainants (Denis and Peter) believed the statement was sexist, ageist, racist and offensive to white men, and a “dangerous discourse” to introduce to impressionable viewers.

Verdict: Not upheld. The BSA disagreed that the character’s fictional dialogue encouraged the denigration of, or discrimination against, any section of the community. Better luck next time, fellas.

Irresponsible use of toothpaste (2001)

A viewer frothed in anger upon seeing a patient admitted to Shortland Street under the suspicion of being fed toothpaste by an exhausted parent. The viewer, complaining on behalf of Viewers for Television Excellence Inc, called the storyline “irresponsible” and argued it could negatively influence young people.

Verdict: Not upheld. The BSA believed Shortland Street’s PGR rating was appropriate in this instance. We applaud its objectivity towards toothpaste.

Shortland Street screens every weeknight at 7pm on TVNZ 2 and is available on TVNZ OnDemand.