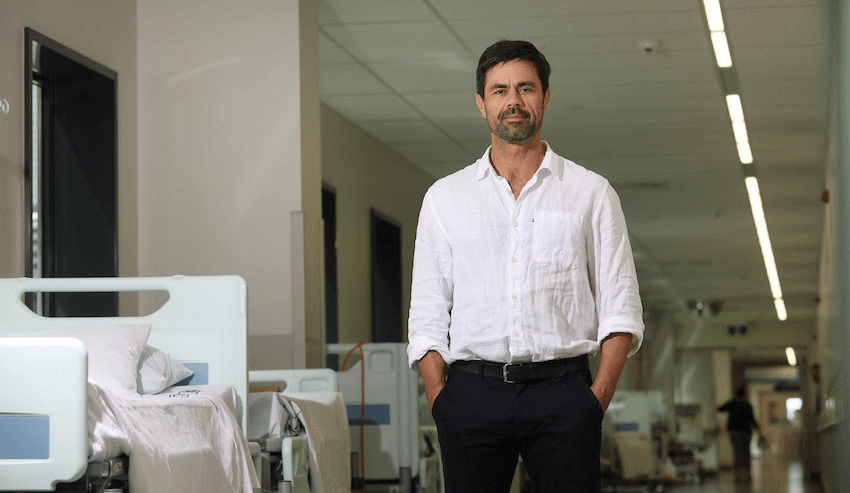 Dr. Richard Babor’s new show How Not To Get Cancer teaches us how to prevent cancer in New Zealand.

Dr. Richard Babor’s new show How Not To Get Cancer teaches us how to prevent cancer in New Zealand.

Richard Babor, a general surgeon, explains what’s he learned about cancer prevention during the making of his TVNZ show How Not to Get Cancer.

The first memory I have of cancer is when my aunt got diagnosed. I was young, in my teens, but I don’t think I really understood what the word “cancer” meant. It’s a very scary thing. When you are younger there’s a perception that cancer equals death.

It wasn’t until I became a medical student when I was 18 that I had more contact with cancer – in a clinical sense, with patients who were going through it themselves.

I think how to deal with that is one of the most difficult things to learn as a trainee doctor. I remember that feeling of being uncomfortable talking to a patient with cancer, knowing they’re on a medical merry-go-round that is far from fun.

Having a conversation with someone like that is tricky, especially because as an 18-year-old you don’t have a lot of life experience.

Now, unfortunately, I do have a lot of experience – those conversations are something I do too often these days.

While I was filming The Big Ward, director Rachel Currie noticed half my work was cancer surgery. How Not To Get Cancer came out of a lot of conversations about cancer – and what we can do to prevent it. The deeper we got into the subject, the more convinced I was that cancer prevention is real.

It’s really difficult to find all the cancer prevention information in one place. We thought this show would be a great opportunity to bring it all together, and to have an important, critical conversation.

That’s part of what we wanted to do with How Not To Get Cancer. It’s an emotive – and emotional – topic and one where there is absolutely no blame, but it’s a conversation that we really need to be having as a country.

Of course, research into cures and treatments is crucial, but why not think about ways to put a safety fence at the top of the cliff, rather than rely on an ambulance at the bottom of it? If you were a caveman, you’d be walking around just reacting to your environment, but surely we can do better than that.

Personally, I’ve learnt so much while making the show that has made me change the way I live.

There are the simple things. While I’m not going to be an All Black or an Olympic rower, I feel my fitness is better now than it was before the show. I used to punish myself quite a lot when I worked out, but talking to Grant Schofield, who is a professor of Public Health and the director of the Human Potential Centre at AUT Millennium, convinced me that less can be more.

Following his research, I’m now doing workouts just as often, but at a lower intensity. It’s more enjoyable, it’s less punishing and I recover faster, meaning I get the same kind of benefit from it but with less pain. I do a little bit of high intensity, which we talk about in the show, but now I love gentler exercise like running around the waterfront and riding my bike to work.

Being even moderately health literate I knew what a healthy diet was, but working on the show has pushed my diet even further into a more healthy place. Less meat is probably the biggest change for me, and certainly less processed meat – bacon, sausages, ham and that sort of stuff are all out.

While filming, we saw it in Greece, the United States, Western Europe, even in the younger generation in Okinawa, Japan: wherever you go, there’s a culture of fast food, ultra-processed food, sugar, too much meat, too much protein, too much exposure to environmental carcinogens, and environmental degradation that increases people’s risk of cancer.

Obesity is a massive cause of cancer and the food environment is driving that. The Australasian College of Surgeons has said obesity is an environmental disease, and that is to take the blame off the individual, because blaming the obese person is pointless. You can’t fight obesity that way – you have to change systems at a policy and regulatory level, and it takes collective will to do that.

The whole world is connected and we don’t have to be lagging behind – we could be leading the way.

When it comes to cancer prevention, New Zealand is doing quite well in some ways but badly in others, like colon and breast cancer. And some segments of our population do badly in particular cancers, like prostate cancer. Even the rates of rarer upper-gastrointestinal cancers like stomach and oesophageal cancer are quite high, particularly in Pacific Island and Māori populations.

But making comparisons to other countries isn’t as valuable as thinking about how good we as a nation could be.

We can take control of our food supply, and make it healthier for all of our population. We can make social systems that are more in touch with people’s lives and draw communities together with sustained, healthier patterns of eating, sleeping, working and relating to each other.

Information is power. It’s a cliché, but there is truth to that.

You can watch all of How Not To Get Cancer on TVNZ on Demand right here.