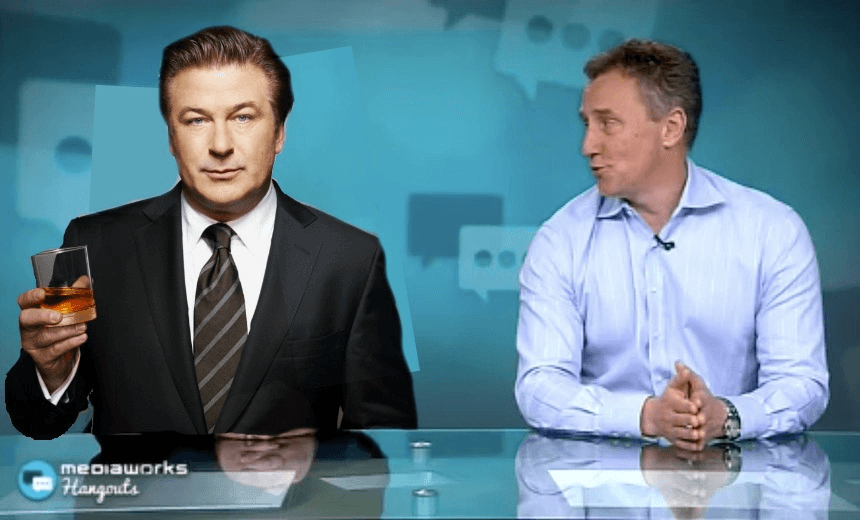 By Joanna McLeod
Guest writer
Made possible by

As Mark Weldon continues to make a series of more and more…interesting choices for MediaWorks, it’s become clear he is following in the footsteps of the greatest TV executive to ever have two ears and a heart: 30 Rock’s Jack Donaghy.

They already both dabble in the wine market, Mark Weldon with the Terra Sancta many media lovers are now boycotting in this post Campbell Live world, and Jack Donaghy’s Donaghy Estates, once described as  tasting “like the urine of Satan after a hefty portion of asparagus.”

After all, back in 1997, TV3 still had Home & Away. But perhaps it put too many eggs in the Summer Bay basket to get a fair suck of the sav. The Spinoff has decided it’s high time to review some of the best decisions Jack Donaghy has ever made, and see how they could help MediaWorks find its footing again (naturally, this will include spoilers for all seasons of 30 Rock).

For starters, clearly something went very wrong in the negotiations with John Campbell. If only Mark had read Jack-Off – How I Out-Negotiated My Greatest Opponent: Myself.

No time to dwell on Mark’s failures though. Anyone who’s seen the entirely smooth and not-at-all forced product integration in The Block NZ will know that he’s been paying attention to Jack. As we already know, Mark loves to broadcast his ideas to staff on the internal TV channels at MediaWorks.

It’d be all too easy. Dominic Bowden must be waiting on standby now Dancing with the Stars and X Factor have both been canned. MediaWorks already has its hooks into the mother of the nation and if they hire some babyfaced boys, maybe this is finally the reality TV show that Steve Broad could actually win.

And perhaps that X-Factor shaped hole in our hearts could be filled a local version of America’s Kidz Got Singing.

By having the kids sing old standards, Jack Donaghy saved masses of money on music rights, much like Mark Weldon did by hiring Natalia Kills and that other guy. Obviously Steve Broad would be a top contender for the nice judge role, and I’d like to believe that Hilary Barry, already prone to disgustingly unprofessional outbursts of emotion on television could really unleash her inner Jenna Maroney given half a chance.

Continuing on the reality train, NBC had Queen of Jordan, and Mark won’t need to squeeze his mind grapes too hard to realise he has his own queen too. Christlike Christie could follow the extraordinary adventures of network executive Julie Christie. From real estate to selecting two almost identical buttugly flags, is there nothing she can’t do?

The MediaWorks stables will keep on giving. Who else could star in a show as misogynistic as Bitch Hunter but Dom Harvey?

And who would need Seinfeld Vision when you could have Guy Williams narrating not just Come Dine With Me NZ, but everything on screen (this is a really good idea, please do this, MediaWorks).

For gameshow fans, we could have Gold Case (though on a Kiwi budget, it would of course be Bronze Case).

Perhaps we could make it a little more successful by hiring strong models to hold the cases – I’m going to nominate Keita from Come Dine With Me of course.

We might need to look outside the MediaWorks stable, because there is no one as insufferably smug as Mike Hosking. I guess, if he couldn’t be tempted over, there’s always Paul Henry. And to get young people to watch, we’re going to need a catchy hashtag. Maybe #NoHomo?

Of course, Jack would have been nothing without his underling Liz “New York third-wave feminist, college-educated, single-and-pretending-to-be-happy-about-­it, overscheduled, undersexed, you buy any magazine that says ‘healthy body image’ on the cover and every two years you take up knitting for…a week” Lemon, with her glasses. cat-lady behaviours and love of cheese. Mark, it’s time to pay more attention to Rose Matafeo, because she also wears glasses and makes TV. I’m still a bit sad that Funny Girls wasn’t called The Girlie Show in the first place. Though obviously, it could have been worse.

With so many great ideas and ways to fix MediaWorks, it’s hard to imagine how Mark Weldon could go wrong. Unless he’s actually TRYING TO DELIBERATELY TANK THE NETWORK. Ooooh TWIST!

No but seriously, Mark, I’ll be over here working on my night cheese waiting for you to give Rose Matafeo more shows. And maybe you should wear more tuxedos because what are you, a farmer?

For more great advice from Jack Donaghy including when to avoid eating a burrito and when to hire Sting for a function, click below to watch 30 Rock on Lightbox