For the first time in 17 years, the six Friends have reunited on the Central Perk couch to look back at the television comedy that made them stars. These were the highlights – and lowlights

Thanks for asking, Joey. Truth is, after watching the Friends reunion, I’m having a lot of feelings! Tonight, for the first time since 2004, the six Friends got together to remember their era-defining roles in the biggest sitcom of all time. The 104 minute affair  consisted of several segments spliced together: an interview with the stars in front of a live audience, a visit to the old sets, a few table reads, and testimonies from both famous and non-famous fans.

Does it sound disjointed to you? That’s because it was. But it was still 104 more minutes of Friends (sort of). I’ll take what I can get.

I got to watch the special a few hours before it aired and have picked out the highs, the lows, and the bits that made me gasp loudly at my desk (sorry, Spinoff coworkers). Everybody seems pretty happy to be there, but my lord, Matt LeBlanc is absolutely stoked about this. He immediately admits to having watched the entire series, while the others shrug and mumble about missing a few seasons here and there. Out of all of them, he’s the quickest to remember details, and definitely the most game to do the silly stunts, including walking the runway during the fashion show segment (inexplicable, but fun) in “all of Chandler’s clothes”.

The best moment, though, has to be where they go to the parts of the set that the cast and crew all signed on the last day of filming. LeBlanc’s sign-off? “I shit here.” It’s almost enough to make me want to watch Joey (not quite, though).

Those are all descriptions of Friends that you could absolutely not apply to James Corden, who HBO Max tapped to host the live interview portion of the special. Corden brings his trademark foghorn approach to the gig, and further convinced me that his continued American success must be an MI6 plot to keep him away from the UK.

At best, he’s an on screen reminder of how rare it is to bring together six actors with such easy charisma and compelling chemistry. At worst, he’s… on screen. 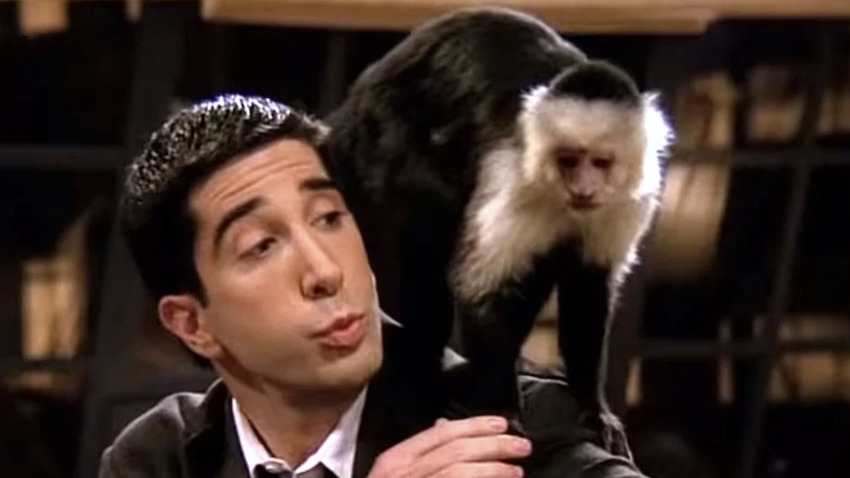 It’s common knowledge among Friends fans that nobody really liked working with the monkey, but my god, David Schwimmer goes in on Marcel, Ross’s pet monkey in the first season. When an audience member asks what the worst thing about working on Friends was, everybody is pretty chill except Schwimmer, who goes into great detail about how the monkey’s handler would feed it live grubs while it was on his shoulder, and the monkey would then rip them in half, eat them, and wipe its juice-covered paws all over Schwimmer.

Katie, the monkey who played Marcel, is still alive and working. She did not make an appearance at the reunion.

LOW: It’s all a bit too slick

When the credits roll at the end of the nearly two hour special, it’s not a huge surprise that all six Friends are listed as executive producers. This isn’t a Real Housewives reunion special, with wine thrown and feuds unearthed (simians aside). The purpose of this reunion isn’t to uncover gossip but to underline Friends’ role as a cultural institution, and remind us all how big this show was, and continues to be. There’s even testimonies from people around the world about how the series got them through tough times, and I mean, same here, but I don’t need to be reminded it was a big deal. The fact that this special exists, and managed to bump Shortland Street from its 7pm slot, is proof enough of that for me.

It’s a shame, because it works best when it’s just the six of them hanging out, reminiscing about old times and genuinely delighting in each other’s company. The audience doesn’t want a fashion show, they don’t want to see them play a trivia game about things they may or may not remember, and they don’t even really want all the juicy gossip (more on that below). No, they just want to see the friends sit around in those ridiculously huge, rent-controlled, apartments and shoot the shit.

HIGH: Definitive confirmation that Ross and Rachel were on a break

It’s the question that never got an answer: Were they on a break? (I say yes, but what Ross did was still shitty!)

All six actors immediately say variations on yes, absolutely, of course they were. Case closed! 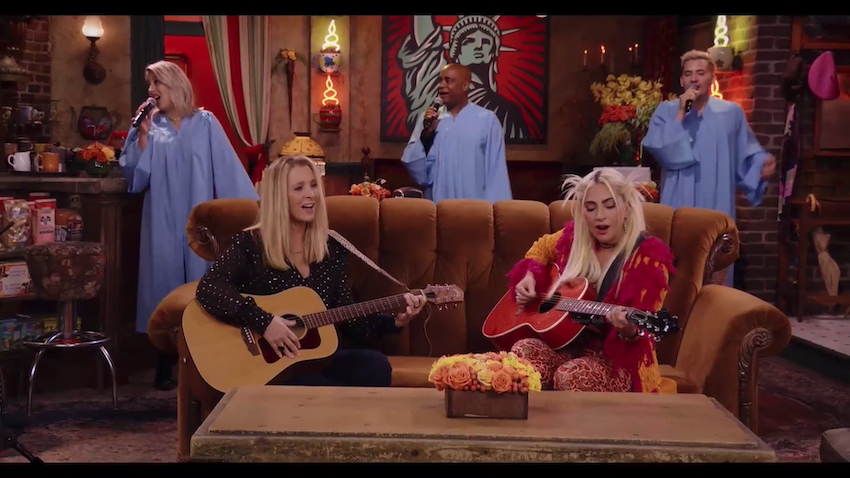 One of the genuine standout moments of the special is when Lisa Kudrow plays ‘Smelly Cat’ on the Central Perk set, snapping back into Phoebe at a moment’s notice. Halfway through, she’s joined by Lady GaGa and they perform a duet which deserves to have a million streams on Spotify by this time tomorrow, and then they’re joined by a full-on choir!

It’s bonkers, it’s wild, and obviously it’s completely staged, but it brought the small gay child inside of me joy, and the bitter gay adult outside of me even more joy. Then Gaga almost ruins it by essentially saying Phoebe Buffay taught her how to be weird, which brings me to another low… 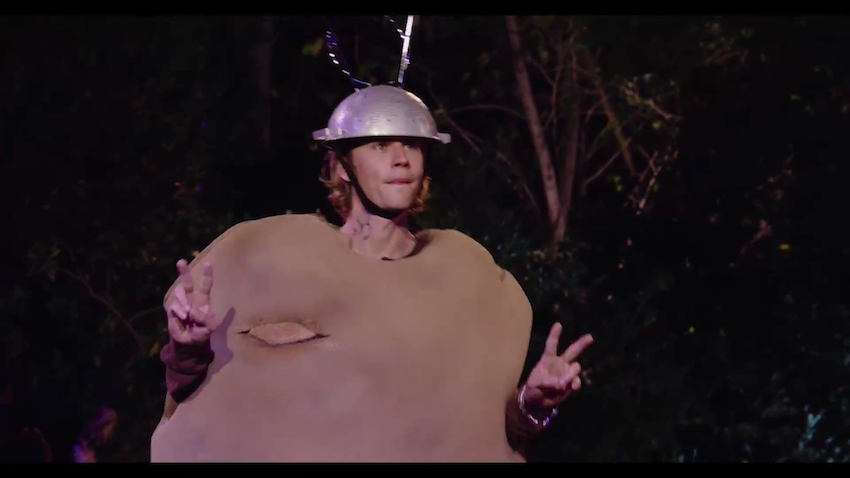 LOW: All the other celebrities

The list of celebrities who are inexplicably in this special is as vast as it is truly random. It includes David Beckham, Mindy Kaling, Cara Delevingne, Cindy Crawford, Malala Yousafzai, Malala’s best friend Vee, and Justin Bieber, dressed above as “Spudnik”, Ross’s terrible idea for a Halloween costume.

But we’re not here for the celebrities! We can see them elsewhere! If I want to see Mindy Kaling, I’ll stream The Mindy Project. If I want to watch or listen to Justin Bieber, there are many YouTube videos with his face and voice in them. Less celebrities, more friends! (That’s also a good motto for life, really.)

It’s easy to forget, even after all these years, that these actors were really, really good at being these characters. The special has the cast read some of the best scenes from the series, including Phoebe finding out that Monica and Chandler are dating, and the slow reveal of the jellyfish secret.

However, the best of these, by which I mean the one that made me deplete my daily allocation of Kleenex, is when Schwimmer and Aniston read the scene where Ross and Rachel kiss for the first time. Not only do we get to see the actors – older and wiser, with all the emotional weight both those things bring – read a scene they nailed the first time around, we also get to see the scene as it was filmed intercut with their reading. It brings a surprisingly moving gravitas to what was already a legendary scene. Schwimmer and Aniston are not just performing the scene, they’re remembering it, and seeing them go through that is more poignant than I expected this special to get. 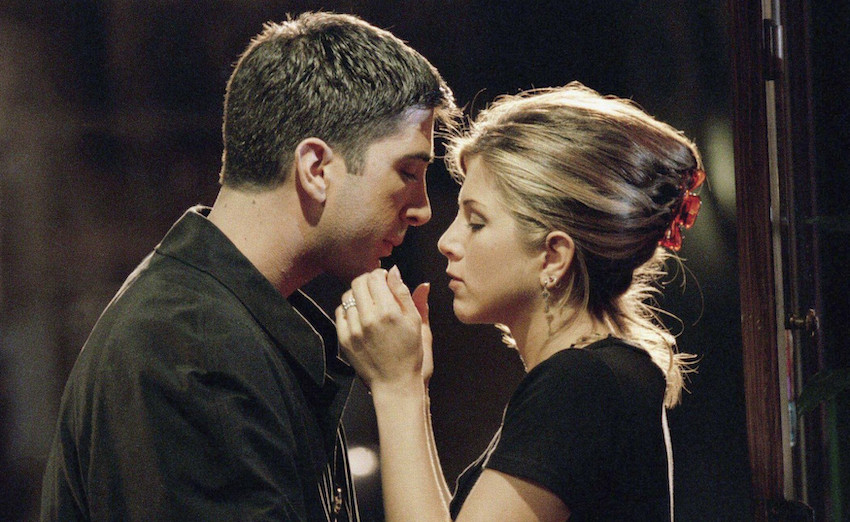 WHOA: David Schwimmer and Jennifer Aniston had feelings for each other

Yeah, this is the closest the special gets to revealing anything, in a way that feels utterly intentional. Corden asks the six if anything romantic happened behind the scenes, and Aniston lobs it over to Schwimmer, who admits that he and Aniston had a crush on each other, but because they were dating other people at the time, nothing ever really happened. Ships in the night, he says. In fact: the first time they kissed was onscreen! (LeBlanc coughs “bullshit!” so who knows.)

I don’t want to call bullshit myself, but the moment absolutely seems like dangling a piece of gristle in front of a hungry dog outside when you’ve got grocery bags full of scotch fillets in the kitchen. They give us one thing, barely even half a thing, so we won’t ask for any more.

It makes sense to me. If you’ve followed the careers of these people since, they’ve gone to great lengths to distinguish themselves after Friends, and with the exception of Aniston, to live largely private lives (as much as one can when drifting in and out of the A list). The press was not necessarily super pleasant to them in the 90s and 00s, and if they kept mum then, why the hell would they come out with the goss now?

HIGH: Just… the Friends, you guys.

I grew up with Friends. I don’t have a memory of TV without it, and it remained appointment watching for me well after its original run finished and it began airing in seemingly endless cycles at 6:30pm. The best episodes of Friends are some of the best episodes of television, ever. When it ended in 2004, it literally felt like I was losing some of my friends. (I was a 13 year old gay kid, I was dramatic.)

Along with millions of other people around the world, I would happily watch these six people do anything together. No show has really replicated the Friends formula since; there might be other ensembles as good, and shows that are bigger or funnier, but no sitcom has reached genuine cultural ubiquity like Friends has.

The reunion wasn’t really for the six of them. They’ve all long moved on from this. No, it was for us. It was for the cheugies who still laugh when someone says ‘pivot!’ and the losers who, with nearly endless amounts of new TV to watch, will still boot up any random episode of this series for a laugh, and will continue doing so for decades to come. To quote the theme song from another timeless sitcom: Thank you for being a Friend.

The Friends reunion is available to watch on TVNZ OnDemand.