Kimberlee Downs remembers her time spent covering the 2019 Rugby World Cup in Japan as a “very social” occasion. Journalists from all over the world met, made friends and hung out together. Downs, a TVNZ sports reporter, loved it. “[It was] such a wonderful time for immersing ourselves in local culture … yes, including the karaoke bars,” she says.

Two years later, at the Olympic Games Tokyo 2020 – delayed for a year till 2021 – things are very different. “This time, there’s none of that,” admits Downs, one of four reporters and three camera operators who have been sent over by TVNZ to cover the event. “I’m certainly a lot more wary of journalists from other countries than I have been at past events – regardless of the fact they had to have tested negative to get here.”

She’s been keeping her distance from other media representatives, as well as the athletes she’s interviewing, when out reporting. “We all know each other reasonably well, so of course there’s fun banter when we’re in press conferences or in the big media workroom,” says Downs. “But we’re not socialising outside of our company bubbles – no one wants to be subjected to isolation.” 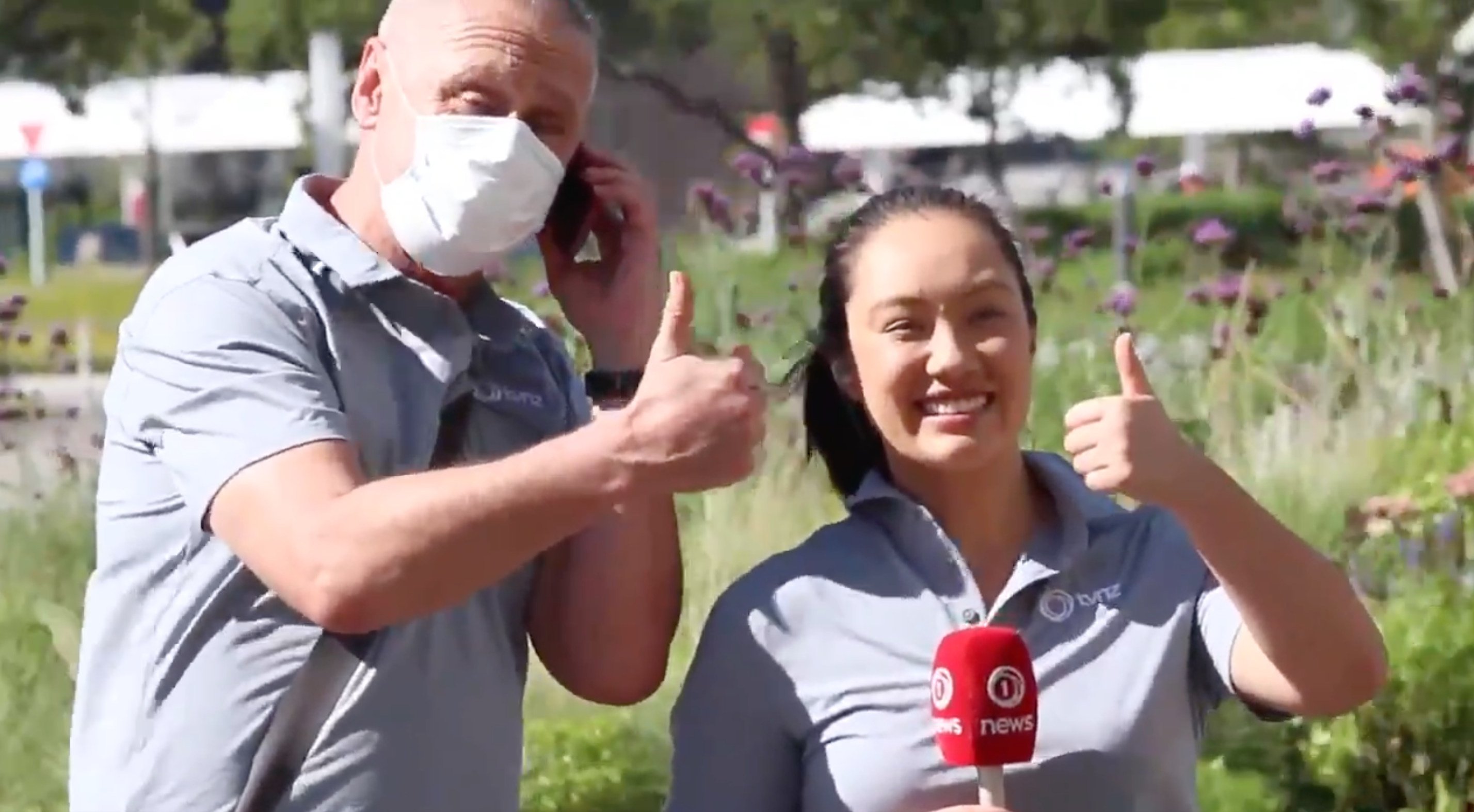 Kimberlee Downs, right, and a TVNZ camera operator prepare for a live cross on One News. Photo/TVNZ

It’s just one of many signs that this Olympic Games, already surrounded by bad vibes after Covid-19 complications, is among one of the strangest international sporting occasions ever held. Overseas visitors are barred and locals have been told not to gather to watch events, with Tokyo currently in a state of emergency to contain the spread of the virus.

That meant the weekend’s four-hour opening ceremony spectacle was unveiled to a near-empty National Stadium as protests erupted outside. Interviews with athletes are conducted at a distance, with masks firmly on. A swimming pool arena containing just media and fellow athletes cheered on Kiwi swimmer Lewis Clareburt in his failed bid for a 400m medley gold. “It doesn’t feel like an Olympics,” said UK breaststroke medal hopeful Adam Peaty after finishing a heat recently.

These protocols filter into many of the live crosses fronted by TVNZ’s four-strong reporting crew. Often, journalists spend more time talking about “an Olympics like no other” than the actual sport. During one of his first reports, Chris Chang, another TVNZ sports reporter in Tokyo for the Games, mentioned his mask, featured several socially-distanced interviews with athletes, and included footage of the Silver Ferns being welcomed by a masked haka.

During her coverage of the opening ceremony on Saturday night, Downs referenced the subdued atmosphere, low crowd numbers and the protesters outside more than the event. She signed off by calling it “a Games that will, for better or worse, go down in history”.

On Sunday night, she filed another report about New Zealand’s traveling reserves, athletes who are ready to step up if others are struck down by illness or injury. They were locked down, exercising in isolation, unable to step a foot outside their hotel. There was just a glass door was between them, yet Downs wasn’t able to interview them face-to-face, instead conducting interviews via Zoom from the hotel’s foyer. Even then, she kept her mask on. Everyone did.

Behind the scenes, things are even weirder. Chang has been posting regular social media updates about what life is like for journalists covering the occasion. It’s fascinating viewing, with frequent Covid-19 saliva checks and even meal times fraught with regulations. “There’s a plastic glove dispenser at the buffet,” says Chang. “You pop your hand over the sensor, which seems to generate a puff of air just delicately enough to blow up the glove, allowing the diner to pop it on in a contactless manner.” Chris Chang shows off his dining glove, a Covid-19 protocol while covering the Olympics in Tokyo. Photo/Twitter

After gathering their tray of food, diners sit separated between walls of transparent perspex. Downs says eating is the only time she takes off her mask, which is on her face before she opens the door of her hotel room every morning. “We’re sanitising all the time, everywhere we go,” she says. “And there are temperature checks to enter every venue and the hotel restaurant.”

It’s not just athletes who have been planning for peak performance over the past few months. TVNZ’s team – including fellow reporters Guy Heveldt and Rapaera Tawhai – were fully vaccinated before they left and issued with a substantial health and safety plan. “TVNZ gave us a huge supply of masks, sanitiser, wipes, all the stuff we’ve kind of got used to not having to use back home,” says Chang. Competing network Three has a team of six, with three journalists, Lisette Reymer, Ollie Ritchie and Mitch McCann, and three camera operators.

The biggest difference between journalists and athletes at these Games might be their sleeping arrangements. Are reporters also forced to sleep on those controversial anti-sex beds? “I can confirm the cardboard beds are Athlete’s Village only!” replies Downs. “I don’t sleep in one,” confirms Chang. “Although the hotel here provides lovely button-up pyjamas which my workmates seem to think essentially serves the same purpose. That’s harsh – it’s quite comfy.”

As you might sense, the reporters I spoke to are staying upbeat, despite being fully aware they’re covering the most unusual major sporting event of their careers. “It’s fun, strange, uncertain and exciting all at the same time,” Downs tells me. “We’ve got to be respectful of Tokyo and its residents – we’re pretty lucky to be over here covering the Games,” Chang says. “It’s a mindset change, I suppose, that we are back in an environment that’s still grappling with this pandemic.”

With a tropical cyclone set to hit Tokyo later in the week, reportedly bringing high winds and heavy rain, it seems there’s going to be plenty more for them to report on from these particularly stormy Olympic Games.