After being shut down for five weeks, Shortland Street is playing a massive game of catch-up. Can the show stay on air?

It got close – real close. “There’s usually an eight or nine-week buffer,” says Michael Galvin, the Shortland Street stalwart who has played Dr Chris Warner since day dot. That’s how much leeway Aotearoa’s soapie staple has before it runs out of episodes and would be forced off air, or to run repeats. Both are bad options: the show’s been screening for nearly 30 years and produced more than 7000 episodes.

Auckland’s most recent five-week stay in a level four lockdown has decimated that buffer – when the region shut down, Shortland Street closed too. “Now we’re down to three weeks [left], there’s no wiggle room,” says Galvin. “First of all we have to keep up with what’s on TV and, as the levels go down, we’ve got to catch it back up again.”

That’s alarming news for the show’s legions of fans. For half an hour every weeknight, Shorties’ dramatic theme tune chimes and viewers get to experience medical misadventure on an extreme level. Relationships fall apart, new ones are formed, hospital chaos ensues and dozens of shifty looks are exchanged between the foyer’s ferns. After weeks of pandemic stress, the last thing fans need right now is for their favourite show to go off air.

Galvin, 54, knows this better than anyone. At a pre-Covid open day in 2019, thousands of people showed up, waiting for hours to chat with cast and crew. “I didn’t fully get how important this was to people until (then),” says Galvin. “A lot of people are really into it. It was very moving to think that a lot of people really rely on Shortland Street to be there.”

He’s telling me this from South Pacific Pictures’ West Auckland studio, where Galvin returned to work last Wednesday. He enjoyed lockdown, going for daily walks, helping his 15-year-old daughter with her schoolwork, and bingeing his way through Succession as part of a TV club formed with fellow Shorties star Sam Bunkall. They later watched the “very grisly” Hannibal, marvelling over the art department’s budget, one so big it makes the Ferndale Strangler look like a crappy high school Halloween production. But all good lockdowns must come to an end and Galvin and the rest of the cast returned to work last week when Auckland dropped to alert level three. He knows how lucky he is to be there. “I had confidence that I would have a job at the end of (lockdown),” says Galvin. “I’m in a very privileged position to know that was the case.” He was also desperate to catch-up with everyone. “Actors are very social creatures. I was dying to gossip with everyone again.”

Under level three filming guidelines, gossip isn’t really allowed. Already briefed via a Zoom meeting, which was then backed up by an email containing the show’s new filming protocols, the masked actor arrived at 7am to a very different set than the one he’s used to. Interacting with other actors, other than when cameras were rolling, was pretty much banned. “It was very inward,” he says.

To stick to Covid-19 precautions, a one-way system has been introduced to the studio’s “rabbit warren” network of corridors, dressing rooms and sets. Actors arrive in the front door and head straight to their dressing room. “They don’t want us hanging around the corridors chatting,” says Galvin. “They’re very averse to that.”

There, they’ll get dressed in character and apply their own makeup, a breeze for Galvin, who just dabs on “a bit of powder and some concealer”. He admits it’s much harder for the show’s female stars, who can spend more than an hour in a makeup artist’s chair. Should any issues arise, makeup and wardrobe help is available for the actors via Zoom.

Once on set, filming is also plagued by potential problems. Characters can’t hug, touch, or even hold the same items. That means a direction as basic as passing a phone or manila folder has to be cut. “If I open a door in a scene no one can shut that door until it’s been sterilised,” Galvin says.

Plenty of changes have been made to scripts on the fly, but things still sneak through. “Within a scene you have to think of a way to solve that problem,” says Galvin. “We go, ‘OK, we need to change this line,’ ‘I don’t pass it over, I just show it,’ or ‘I already have it when I enter the scene.’”

When actors finish scenes, they don’t go back to their dressing rooms. “You actually exit the studio, leave the building, go around and enter the front entrance again,” says Galvin. The one-way flow continues so actors are kept safe, Shortland Street can keep filming, and fans can get their next fix.

Within those limitations, they’ve found workarounds. Scenes can be shot and edited to make it appear as if characters are closer than they really are. If alert levels change next week they can film shots missing from episodes already edited and slot those in. It hasn’t limited the show’s bold storylines either. “No matter how intense the storyline is, we’ll still do it – but it will be tweaked,” says Galvin. 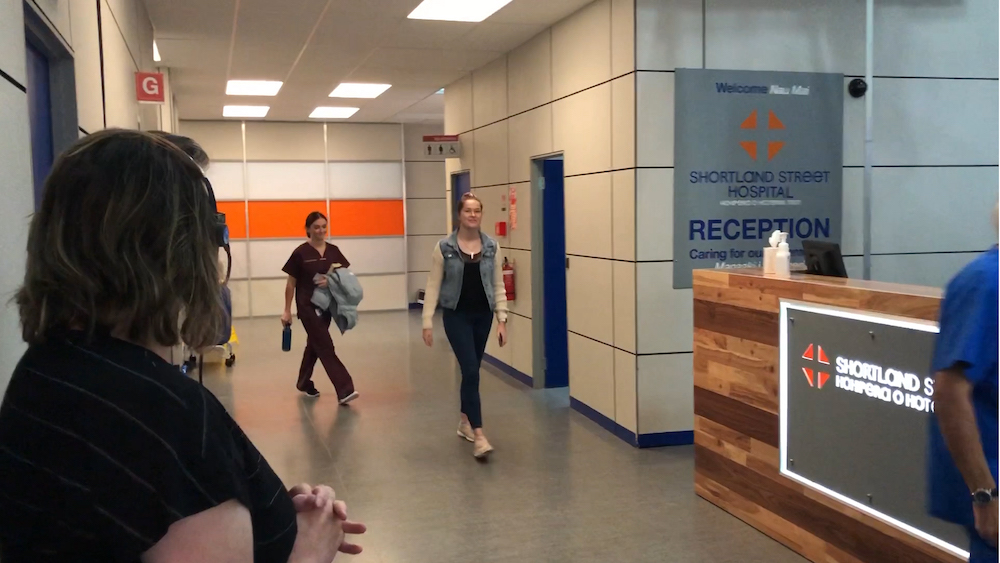 Actors may not be able to touch each other, but Galvin says that’s something that can actually help a romantic moment. “Those scenes worked better than we thought,” he says. “If people are feeling something but not physically acting on it, it creates nice romantic tension.” When someone’s hurt, or upset, it’s trickier. “Those were the scenes you really want someone to reach out an arm.”

The cast have found a workaround to get their gossip in too. Usually, Galvin says Shorties’ stars are “resentful” of rehearsing. “We’re like, ‘We don’t need to waste time with that. We’ll do it on set.’” Right now, they’re finding a little more room for it, pulling up chairs, sticking to their two metre distances, and supposedly reading through lines. “Those are our catch-up times,” says Galvin. “That’s where we get to gossip.”

Shortland Street’s producers enforced the same restrictions during last year’s various alert level changes. Dr Warner’s trickiest scene was saying goodbye to his dying son Phoenix. “I had to stroke his hair saying, ‘It’s OK,” says Galvin. Because of protocols, they couldn’t use the actor, Geordie Holibar. ”I had to do it on this weird mannequin doll and the arm wouldn’t go down. It kept sticking out,” says Galvin. “I had to hold the arm down with one arm and stroke my imaginary son’s hair with the other. That was pretty intense.”

Dr Warner’s in the thick of some intense storylines right now too, which is why Galvin has to show up on set at 7am. He’s learning his lines days in advance, filming up to 12 scenes a day. “He’s got relationship problems with his partner Michelle. That’s all falling apart,” he says. Galvin also teases that “various strange things are happening around the hospital”.


If fans are hanging out to find out what happens next, they won’t have to wait long. With such a short buffer, any scenes filmed today will hit screens in just three short weeks. “We got away with it last time – I can’t believe that we did,” admits Galvin. “I have confidence we’ll be able to do it this time too.”