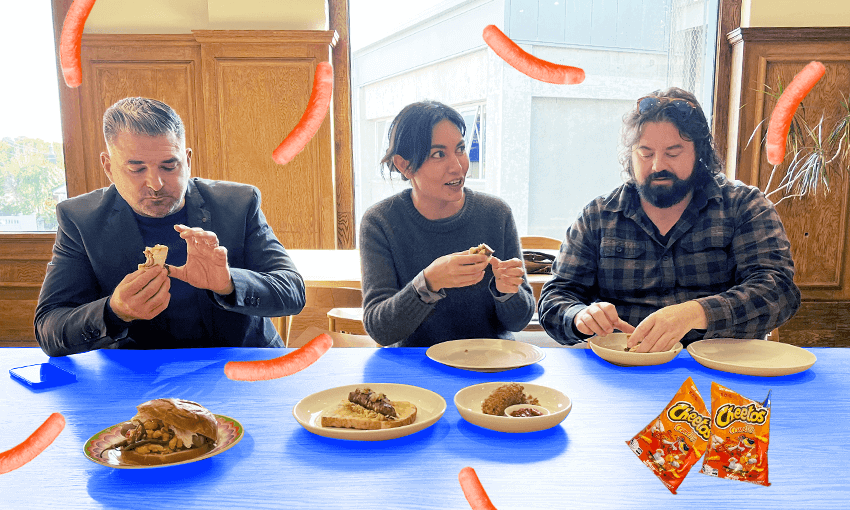 As Masterchef NZ returns to our screens, four Spinoff staff get a ‘terrifying’ taste of what it’s like to cook for the three new judges.

When the seventh season of Masterchef NZ begins tonight, 27 cooks will assemble to battle it out over hot stoves for the winner’s crown. Each of the contestants will be doing their best to impress this season’s three judges: previous winner and entrepreneur Nadia Lim, Cuisine three-hatted chef Vaughan Mabee of Amisfield and restaurateur Michael Dearth of Baduzzi and The Grove.

It’s scary enough cooking for friends and family, but I’ve always always wondered: what’s it like having your kai pulled apart, critiqued and judged by professionals?

There was only one way to find out – lure the Masterchef judges to The Spinoff offices to put mine and three other colleagues’ cooking skills to the test.

I pulled in deputy editor Alice Neville, commercial editorial director Simon Day and partnerships manager Matthew McAuley for a chaotic cook-off in front of the judges. Our challenge: a personal take on the traditional sausage sizzle.

As the competition day drew closer, the pressure began brewing among us four contestants. The logistics of how we’d actually cook food in an office without oven or stove facilities was giving me daily tension headaches. Simon protested the challenge altogether – he wanted to make French omelettes instead of snags. Matthew wasn’t having it, replying succinctly via group message: “I don’t want to make a damn omelette”.

The evening before the contest was pure mayhem. Alice spilled her bread crumbs all over the kitchen floor while pre-preparing her dish. Simon almost missed the supermarket closing time to grab his ingredients. My local supermarket had sold out of both the sausages and buns I was relying on. While attempting to take a photo of his culinary creation, Matt dropped his wooden spoon covered in gochujang barbecue sauce on the ground. Despite being a relatively simple cooking challenge, things were already frenzied.

Our competition started at 9am sharp on Thursday morning. The air was threateningly crisp. The three judges pulled up early in Ubers, forcing me to stall while anxiously waiting for my fellow contestants to arrive. Simon, who had the barbecue – all we had to cook on – was running half an hour late. When he did arrive, he delivered the grill and took off again to make kōhanga reo drop-offs, leaving Matthew to cook both his own and his competition’s sausages.

It seemed like a fittingly shambolic start to what I expected would be a shambolic morning. But somehow we pulled through and each managed to plate up our kai to the judges lined up across the table.

Simon was first up to the intimidating judging panel with his take on the sausage sizzle, “a tribute to the Bunnings sausage” but also “a tribute to British cuisine”. His dish featured a pork Cumberland sausage, a Cumberland sauce prepared that morning “while getting two year old twins ready for daycare”, crispy shallots and a dill pickle salsa balanced on white Tip Top bread with “heaps of butter”.

“This food, it has a story,” said Mabee before taking his first bite. “And that’s what we’re looking for.”

Stories aren’t everything though. For Lim, the competition was mostly about taste. “That tang is nice with the richness of the sausage,” she commented. This whole being judged thing didn’t seem so scary.

“I just ate a pip,” Dearth said severely, sending a shiver of fear down all the contestants’ spines. “The last bite was really bitter, trust me”.

“I believe you, I’m just disappointed in myself,” Simon replied.

Matthew was up next with his dish, as well as a promise: “No pips, that’s the one commitment I will make – everything else is up in the air.”

Matthew’s dish featured yet another Cumberland sausage glazed with the gochujang barbecue sauce he’d made ahead of time, a sprinkling of cabbage (some scorched, some fresh), chopped bread and butter pickles and Kewpie mayo, all served atop a crispy slice of Japanese milk bread. This dish marked Matthew’s first time glazing sausages. “Inspiration hits when and where it hits,” he said as he explained that the idea came to him while standing at the grill.

It was the “delicious buttery and toasty smell” and contrast between the fresh and slightly grilled cabbage that impressed Lim.

Because Dearth is originally from the US, he found nostalgia in the relish compartment of the dish, saying “you kinda brought me home”. To him, the dish invoked a specific foot long hotdog joint in his Connecticut hometown called Frankies – a spot he hasn’t visited in 20 years.

A vegetarian take on the sausage sizzle was next in line. Alice served up glamorgan sausages, a traditional, and vegetarian Welsh dish that she’d first eaten in a Welsh pub “many years” ago. These “poor man’s sausages” or “Welsh falafel” were prepared ahead of time by Alice and featured a crumb made from homemade sourdough, cheese, thyme and leek and served alongside a homemade capsicum and chilli relish.

“I love your courage,” said Dearth. “You could have just bought them, but you decided to make your own,” Nadia said, looking impressed.

Across the panel, each judge was excited by the flavour profile of the glamorgan sausages. But there was one let down: a lack of heat. Alice’s seemingly cunning idea to cook her dish ahead of time had backfired. “If this was freshly made, would I have a different experience than I’m having now?,” Dearth asked. “Probably… hopefully,” replied Alice.

My own dish was last on the table, and I can’t say I was happy with the end product. I served up a last-minute take on completos, a Chilean hot dog variant. Mine was made up of a ridiculously large brioche burger bun, pork frankfurter, avocado, diced tomato, Kewpie mayo, Persian pickled chillies and a sprinkling of crushed cheetos for good luck – and I needed it.

While the judges were appreciative of the fresh flavours in the dish, the ratio of bun to meat quickly and unsurprisingly became a distraction from anything positive. “The sausage is lost,” remarked Mabee. As if it couldn’t get worse, he only got one cheeto despite “really looking forward to that”.

Perhaps chopping the bun in half or “carving out a crevasse” ahead of adding the rest of the ingredients would have helped alleviate the unfortunate proportions, commented Dearth. “I think you were let down by that giant bun,” he said. Really, I think I was let down by myself.

You can’t have a cooking contest without a winner. So we stepped aside to let the judges deliberate. After about one whole minute they’d come to a consensus.

“This was a close contest,” Dearth said. Both Simon and Matthew had made it to the top two.

But it was Matthew’s slow and steady work ethic along with the fact he cooked both his and Simon’s sausages that gave him the winning edge. He may have been extremely nervous, but all the judges could discern was “cool, calm collectedness,” said Maybee.

“We all agreed that today you’re the top dog,” he said.

So, what’s it like to have your food judged by chefs? It’s perhaps best summed up by The Spinoff’s Masterchef winner Matthew, who called the whole experience “terrifying”. “There are no stakes here but I still feel like I want to shrink into the earth.”

Masterchef NZ airs at 8.30pm tonight on Three, after the Dancing with the Stars grand final, and is available to watch on Three Now.