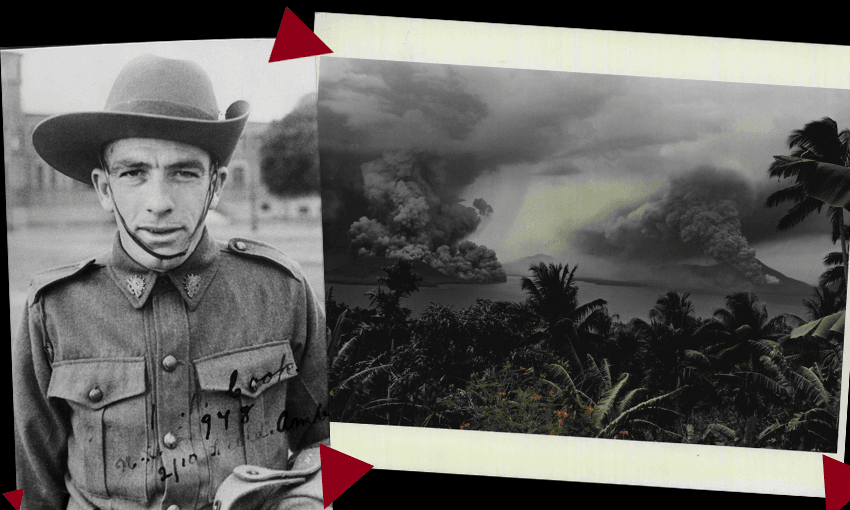 New Zealand journalist Harrison Christian’s exceptional new book Should We Fall To Ruin takes an Anzac perspective of the Japanese invasion of Rabaul, New Guinea, in 1942.

This excerpt begins two weeks after the invasion. Ragtag groups of Australian soldiers, including young field ambulance officer William Cook, are traipsing through the jungle, looking for food and shelter.

A fortnight had passed since orderly Private William Cook had left Vunapope Mission, where the nurses and patients, nuns and priests had all surrendered to the Japanese. Cook was now in a party of eight medical staff, shuffling along a coastal trail; “all of us dead-beat, every one of us ready to drop in his tracks”. Like the other Australians in the vicinity, Cook must have heard the rumours of food, shelter and possible rescue at Tol Plantation. He was coming up on Tol’s eastern boundary when he stopped for a meal. Half of the party grouped around a fire, and down the trail a little, Cook and the others lay about the path. Cook’s friend and colleague, whom he knew as “Raffles”, produced a deck of cards from his pack and they began a game of poker. Cook was fingering his hand, three aces and a pair, when the four men who had been cooking came darting down the trail. “The Japs are here,” they hissed as they shot by.

Cook jumped off the track and into the bush. He threw himself down behind a fallen log, and lay there breathing and listening to a commotion on the track. Slowly he stole a look over the log. Through the trees he could make out the track and his comrades holding their hands up, surrounded by strange figures. “Suddenly I felt very sick and all resistance went from me, running out of me like water squeezed from a sponge,” he recalled. Not knowing why, Cook got up and worked his way back to the track with his hands up. The Japanese prodded him into line with the other Australians, who were being kept under guard with fixed bayonets. It was the first time Cook had seen a Japanese person.

Presently a Japanese officer and his patrol came along the trail with his own haul of prisoners. The officer gave Cook and his comrades a little book in which to write their details. Then he cut the identity discs off their necks. He noticed that Cook and his colleagues were wearing Red Cross armbands, so as the crowd moved off in the direction of Tol, he made them carry a wounded Australian. The soldier hung limply off Cook’s arm, his head down, not saying anything. The going was slow, and after a half-mile the officer grew impatient. He halted the column and signed for Cook to put the wounded man down.

“We lowered him to the ground and then the officer, after calling a Jap over, went back to the head of the column and we started on our way again,” said Cook. “I looked back at the man we had just left, lying there on the track with the Jap standing over him. He raised himself on one elbow and waved. I waved back.”

The prisoners marched to the plantation house, where the Japanese tied their thumbs together behind their backs, and then roped them together in chains of three or four. Cook was bound to two other men. After everybody had been tied up, strings of prisoners were marched away from the house, into a grove of coconut trees on a small hill overlooking the shore. The Australians sat with their backs to the sea. The Japanese told them by signs that they were not to look around. One of the men disobeyed, and a guard broke his jaw with a rifle butt.

Cook dropped his head between his knees. He thought he was about to vomit. Then came a nudge from Raffles, seated beside him and attached to a different chain of prisoners: “Head up, pal.” Cook raised his head and saw the officer standing before him, arms akimbo, deliberating. One of the Australians made an appeal on behalf of Cook and the medics, gesturing to their Red Cross armbands. But the officer merely smiled and ripped the armbands off their sleeves. Then he signed for the man at the end of the line to get on his feet. The man obeyed, and Cook looked at his face: pale, the muscles at the side of his mouth quivering. “See you in hell, fellers,” the man said. Two guards marched him off down the hill.

“Christ, oh Christ,” said Raffles. Cook could hear other men praying. The guards came tramping back up the hill and the officer said, “Next,” revealing that he had at least some knowledge of English. Two Australians stood up, said “Cheerio, fellers,” and followed the first man. No gunshots disturbed the coconut grove. Whatever was being done to the Australians, it was done quietly.

“Next,” said the officer. It was Raffles’ turn to go down the hill. He stood up, bringing a chain of two prisoners with him, and said a quiet goodbye to Cook: “So long, boy.” Cook would have shaken the man’s hand, but his thumbs were bound. Instead he nodded at his friend and said, “See you at the bottom of the hill.” At this Raffles winked, and Cook saw that he was working up a wad of spit in his mouth. Suddenly he turned and spat at the officer, then wheeled off down the hill with guards following. The officer cursed and wiped his face with a handkerchief, and ran down the hill after Raffles. Cook heard the crack of three shots from a pistol.

The officer came back, pistol in hand, regaining his temper. There were only five men left in the line: Cook’s chain of three men and another of two. The officer asked by signs how they wanted to die. Did they want to be bayoneted or shot? Cook nodded at the gun in the officer’s hand. The officer ordered him up. Cook and his chain of comrades obeyed and walked three abreast down the hill. At the bottom, where the grove sloped towards the sea, they saw three Japanese waiting for them. The Australian to Cook’s right was praying quietly; the one to his left was uttering the same phrase over and over: “What a way to die. What a way to die.” Cook felt the sick feeling in his stomach abating, his fear draining away. “I’m glad nobody is seeing this,” he said, surprised at the steadiness of his voice.

The guards at the bottom of the hill fell in behind Cook and, facing the sea, he realised with horror that he was not going to be shot. A bayonet burned through the middle of his back and he fell forward onto his face, dragging the other two Australians down on top of him. He felt the bayonet pierce his back five more times. He would have screamed if not for the weight of the other men; one of them was lying across his neck, pressing his face into the sandy ground. He held his breath and feigned death. Blood trickled down on him.

The Japanese seemed to move off, but then the comrade on Cook’s neck rolled down his back, which sent the breath whistling out of his lungs. Then,” he recalled, “the sky fell in and all the pain there has ever been in the world hit me.” The bayonet was raining down on Cook again. It went into his neck four times, and a fifth thrust went through his ear and out his mouth. In the ringing aftermath, he was dimly aware that palm fronds were being thrown over his body. He was lying in his grave. A darkness came over him that he knew was death, and he could hear a voice, his wife’s voice, calling to him clearly and softly.

After a while, William Cook noticed he was awake. He had heard a volley of rifle shots, which he guessed marked the execution of the two remaining men in his party. His own death no longer felt near at hand. He was not slipping away as he had thought; instead the reality of the grave was pressing in on him. Flies were buzzing in his ears, attracted by the blood from himself and his comrades that caked him from head to toe. He worked at the strap that bound him to the other men until he broke free. He emerged from the stack of palm fronds and staggered like a revenant to the beach, falling on his face, blacking out and coming to again. He writhed on the sand until he managed to chew through the cord around his thumbs. No Japanese were around to stop him.

Cook waded into the sea up to his waist. The sea bit into his wounds and he screamed and cried with the pain. He walked north up the beach, keeping to the shallows to avoid leaving a trail. He was now stopping to sleep, now wheeling around in a delirium, the palms and tree stumps which lined the beach morphing into enemy sentries. He lay down to slake his thirst at a river. He noticed smoke from a campfire in the distance and grasped for it until sleep took him.

Postscript: Private Cook survived the war, although he lost his voice as a result of a bayonet wound to his throat.

Should We Fall to Ruin: New Guinea, 1942. The untold true story of a remote garrison and their battle against extraordinary odds, by Harrison Christian (Ultimo Press, $39.99) is available from Unity Books Auckland and Wellington.