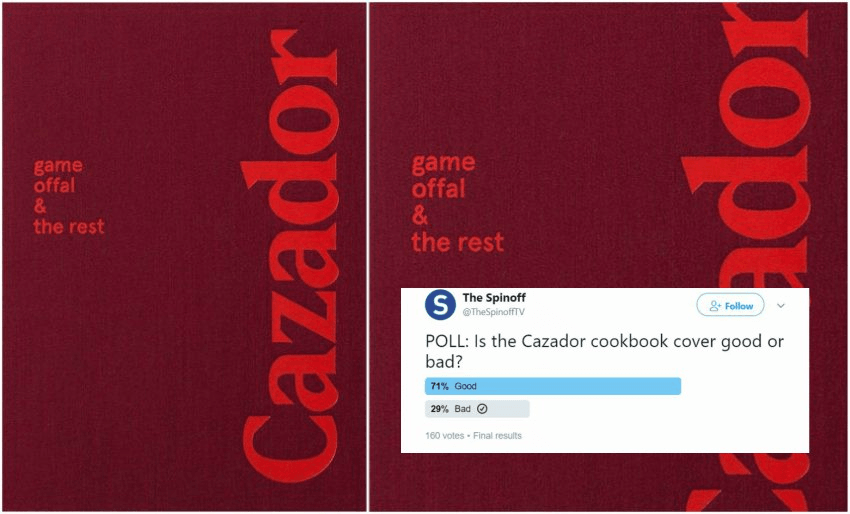 The results of a new poll show that the cover of the Cazador cookbook is not “shit”.

The people have spoken. A new cookbook, slandered as “shit” by Spinoff books editor Steve Braunias, has been declared in an important new opinion poll to be “good”.

The Spinoff ran a story of two halves on Tuesday. It began when Braunias thundered that the cookbook Cazador, winner of the Publishers Association of New Zealand (PANZ!) book design awards for best cover and best designed book, was in fact “the most pretentiously designed cover of all time“; the Spinoff’s Auckland editor, Simon Wilson, then wrote an urbane defence of the book, and declared it “good”.

Who was right, and who was hopelessly wrong? The question was posited on an opinion poll.

And there you have it. Scientific proof that the ugliest book cover of all time is in fact most pleasing to the eye, with 71 per cent of 160 voters declaring it be “good”.

“I can see now that I was hopelessly wrong,” conceded Braunias. “The choice of font, the careful spacing, the daring ampersand, and the deep purple cover all contribute to a striking work. I mean I wouldn’t buy it or anything, and I’d not give it a second glance in a bookstore other than maybe to think, ‘Ugh, hipster trash, fuck I hate that kind of design’, but beyond these simple responses my eyes have been opened to the aesthetic and the craft. It’s a strange choice to win best cover – really? that was the best cover? better, for  example, than the works of design art routinely produced by Auckland University Press and Victoria University Press, which both specialise in beautiful volumes of poetry? – but it’s beautifully designed, ‘elegant and energetic’, as Simon Wilson stated.”

There were many responses on the Twitter machine. There were those in favour of Cazador:

There were those who did not favour Cazador:

And because it was Twitter, someone called Kilm or something got all angry and shit.

“I was roundly mocked for thinking that a good cover of a cookbook would be some trash by Jamie Oliver,” said Steve Braunias. “But I have other ideas about what constitutes an awesome cover for a book about food.”