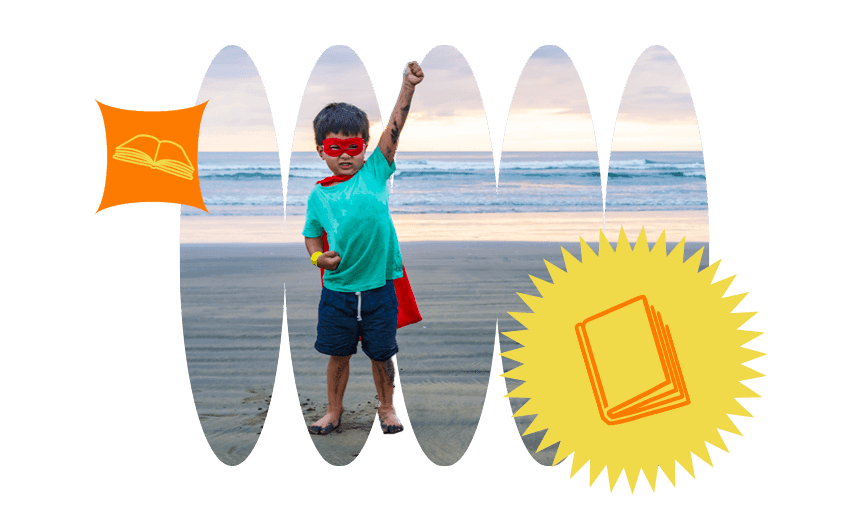 “I was staying with my nan at Waituhi [near Gisborne], and she said to me: ‘Wake up … we have to get going,’ because outside our window there were all these people carrying lamps and walking up the hill opposite, where Takitimu marae was.

“I was a townie boy and loved my sleep and said: ‘Can’t this wait until morning?’ But I come from a place, Waituhi, that was a Ringatū stronghold … and so we went outside and I followed these lights going up towards the Takitimu marae, and then suddenly a deep sigh went up and the villagers began to chant.

“It was a really reverent welcoming chant, and the words were to that group of stars that we are going to be celebrating soon  – and they had magically appeared in the canopy of heaven, and then Nan … said: ‘Now tomorrow, we can begin to plant kūmara.'”

2  A Cluster of Stars, A Cluster of Stories: Matariki Around the World written by Rangi Matamua and Miriama Kamo, illustrated by Isobel Joy Te Aho-White (Scholastic, $35, 7+)

“My great-great-great-grandfather was a tohunga kōkōrangi (Māori astronomer) who held extensive knowledge pertaining to the cosmos. In the late 1800s, he began to record his understanding of the astronomical bodies in a manuscript that was handed down through the generations, eventually finding its way to my grandfather. My grandfather gifted this manuscript to me in my late teens, and entrusted me with the task of sharing its contents” – Rangiānehu (Rangi) Matamua (Tūhoe), introducing this beauty.

The bestselling duology, and by bestselling we mean in the New York Times sense as well as the Unity top 10 sense. We’ve interviewed Gong here and reviewed her books here.

A simple picture book with a slightly odd structure that works well when you’re reading to littles: first you flip through a series of beautifully illustrated spreads, one for each star, with no words. At the back are smaller versions of each spread, with a paragraph or two of explanation beside each.

“I can see how someone could like it, if you enjoy books where the main character has no feelings or brain cells in any way, but it was not my cup of tea” – Corrina

“I nearly melted when Conrad was introduced. That strong, silent, protective guy, why, he was even sexier than Edward Cullen!” – Ruth

“If you ever have an enemy of sorts who likes to read, give them this book. It’s a high tech torture device that will combust their brain into little pieces of nothing. Their soul will die a slow death and the will to read books will diminish. Isn’t that great?” – SK

“i just read this in one sitting and i can confidently say this book was one of the cutest, most comforting reads EVER. it’s cliche and i hate the love triangle trope, but i am obsessed” – Sophia Judice

Features loads and loads of tiny flaps for tiny fingers to rip off.

10 The Seven Stars of Matariki by Toni Rolleston-Cummins and Nikki Slade Robinson, (Huia, $18, 3+)

Here’s a reading by Toni. She introduces it: “I found it really easy to write the story because I lived in a place where I felt there was magic all around.”

Surely every child in Wellington has a copy at this point.

“Heartstopper has found a devoted fanbase since debuting on Netflix in April. A month after its premiere, the series had accrued 1.05 million engagements on Twitter, according to Variety’s Trending TV chart, as well as 4.3 billion views on TikTok for the hashtag #heartstopper. The streamer recently renewed the series for a second and third season.

‘To have a show where you see queer people being happy and being together and united as a group, I think there’s something really beautiful about that,’ [series lead Kit] Connor told Variety in May. ‘I think that shows like Euphoria that are very queer are still very much sort of adult in many ways because they are very dark and gritty. I think it’s really important to have a show that is just portraying queer love and queer beauty.’”

7  The Lighthouse Princess by Susan Wardell and Rose Northey (Puffin, $20, 2+)

A ripper, a beauty, quite possibly a perfect picture book. We’ve raved about it already, and were initially stunned that it wasn’t among the finalists for this year’s New Zealand Book Awards for Children and Young Adults. Turns out it’ll be entered in next year’s round. Phew.

A finalist (and our pick for the win) for the non-fiction prize at the NZCYA; Bishop is also up for the illustration prize but we suspect that’ll go to Isobel Joy Te Aho-White. Winners announced in August.