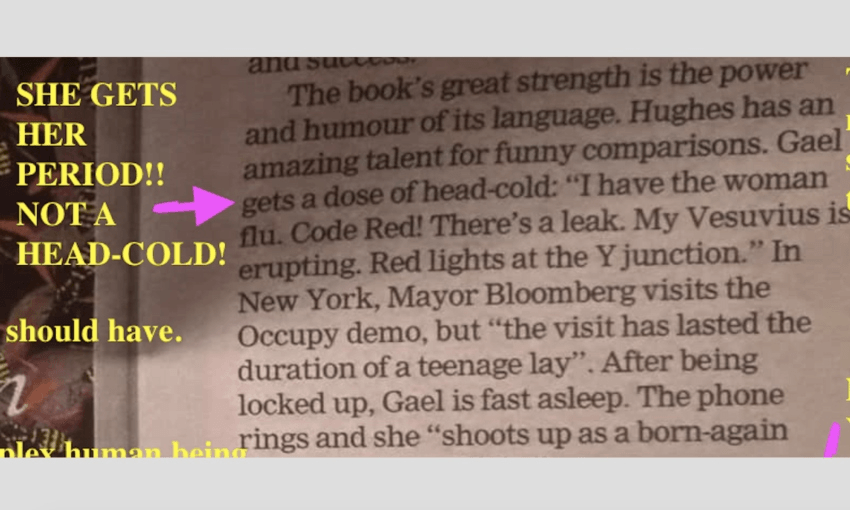 The book reviewer who mistook a period for a head-cold

A New Zealand reviewer thought that a line in a new novel by acclaimed Irish writer Caoilinn Hughes was about a “head-cold”. She has helpfully pointed out it was a period.

“Very cool to be reviewed in New Zealand’s Dominion-Post,” Irish novelist Caoilinn Hughes wrote on the Twitter machine on Tuesday. This was in reference to her acclaimed novel The Orchid and the Wasp. Critics in the US and Britain loved it. “A winning debut”: New Yorker. “Luminous”: Los Angeles Review of Books. “Remarkable…Startling, Exuberant…It zings with energy, ambition and daring”: Times Literary Supplement.

Hughes lived in New Zealand for a while. Her collection of poems, Gathering Evidence, won the 2013 New Zealand national book award for poetry, as well as the Royal Society of New Zealand Science Book Prize. She has since returned to Ireland, where the internet of all things reached out to her with a kind of letter from home – Steve Walker’s review, printed in a newspaper in Wellington, her old neighbourhood. “Very cool.”

But Walker, long-time reviewer at the Dominion-Post and the Sunday Star-Times, didn’t particularly like the book. “It is easy to lose track of the plot,” he wrote, in a review which otherwise mostly tried to set out its contents.

The Spinoff Review of Books asked Hughes to expand on her tweet, but she declined.

The Orchid and the Wasp by Caoilinn Hughes (Penguin, $34.99) is available at Unity Books.