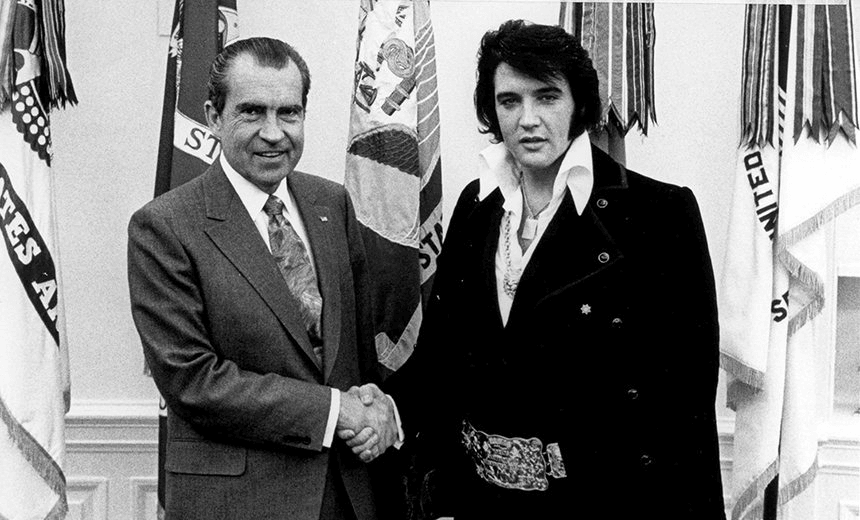 Today in history: That sonofabitch Nixon

Steve Braunias marks the anniversary of Richard Nixon’s farewell from the White House.

Trump, so hysterical and dangerous, can almost make that other, earlier Republican sonofabitch Nixon look good. Almost, but not quite. Today is another anniversary of that happy day on August 9, 1974, when Nixon left office, skipped town, rode out on Chopper One. The historic moment later moved him to poetry: “the red carpet, the green lawn, the white house, the bleak sky.”

The lines are from his 1978 bestseller, the dense, complaining thousand-pager The Memoirs of Richard Nixon. I found a beat-up copy a few years ago in a giveaway stall in Te Atatu. During the school holidays last month I picked up another prime document of Nixonia for $1 at a book sale in Rotorua – The Final Days, by Woodward and Bernstein. Both books had ended up in dustbins of history. Both are yesterday’s papers, old news. The break-in at the Democratic National Committee, the Washington Post in hot pursuit (don’t tell anyone Deep Throat sent you), the expletives deleted on the incriminating White House tapes, all the President’s bungling men, etc. Both books are largely boring, because so much is about plot and politics, but they come alive in the same places – whenever they do character, and reveal or simply describe Nixon.

Fascinating guy. Smart, ruthless, tormented, wise, absurd, a fuck-up, a drunk, sentimental, good, evil, war criminal – he dug the graves at Vietnam, ordered the secret bombing of Cambodia. Every monster needs a genius to understand him. Nixon had Mailer. Mailer, in turn, saw a sick genius in Nixon: “It was Nixon’s genius to know that every bomb dropped somehow extinguished another dangerous hippie, evil was a plague of creeping things and the bombs were DDT to the cess-dumps of the world. It was America which had to be saved…”

Mailer’s round in the newsroom of the 1970s was to divine the psychic energies of the times. It’s the sort of job best done with your eyes closed. Sometimes it’s better to look at the small details. The Final Days shows us Nixon gnawing at the caps of medical bottles in an aggravated attempt to tear them off because he couldn’t figure out the instruction PRESS DOWN WHILE TURNING. His wife, the thin, remote Pat, hides away in her pale-yellow bedroom, ordering lunch of salad, soup, a sandwich, and coffee, then leaving the tray outside her door, the food untouched. Worse, she sometimes had to dine with her husband. There was always a “great rush to get food from the kitchen to the table”, says a White House lackey. Why the hurry? “Because a minute is a long time when you’re not talking.”

Such are the fruits of interviewing 394 people, all conducted “on background” – everything was on the record, but the sources remained confidential. Woodward and Bernstein took leave of absence from the paper to research and write the book. It took about six months. They were given two assistants, and set up an office on the sixth floor of the Washington Post. “The notes from each interview were typed and each significant detail was indexed…Nothing in this book has been reconstructed without accounts from at least two people.”

Nixon laboured longer on his book at La Casa Pacifica in San Clemente, helped by “wonderful volunteer women”, and his professional research assistants included Diane Sawyer. He went through 20,000 pages of notes written on yellow legal pads that he’d kept as President. There were also diaries, tape transcripts (the President who wiretapped himself), and “memcons”, the helpful abbreviation he used for “memoranda of conversations”. Of course it’s self-serving, the portrait of a faultless man. But it’s much the better book. Nixon reveals more of himself than Woodward and Bernstein manage with their 394 interviews and their indexing.

There he is, tucking into his lonely Oval Office breakfasts of corned beef hash and poached eggs. His leg swells up, and he wraps it in hot towels four times a day. He comes up with the idea of wearing a US flag lapel on his suit after seeing it in the political film The Candidate – starring Robert Redford, who later impersonated Bob Woodward. He thinks often gloomily about his mother.

Watergate starts off as something minor, a vague irritant. The first he knows about it is on holiday in the Bahamas, when he reads a small story about the break-in in the Miami Herald. “I could not muster much moral outrage over a political bugging. The Democrats had been doing this sort of thing for years…I said, ‘It’s gonna be forgotten after a while’…It became an annoying problem, but still just a minor one among many….I said, ‘It’s such a ridiculous goddamned thing.’”

Watergate finishes off as everything. It’s the only thing he thinks about. Woodward and Bernstein depict him sitting in the Lincoln Room day and night, listening to the tapes, and finding no evidence of a cover-up. One of the few times he takes his mind off the crisis is at a state function for – what the hell! – Norman Kirk.

Woodward and Bernstein measure the noose tightening around Nixon’s neck; in Nixon’s memoir, he’s like a man waving his arms at a picnic which has been set upon by bees. The strongest scene in The Final Days is Nixon with Kissinger in the Oval Office. Nixon has been drinking. “Pray with me, Henry,” he weeps, and the two most powerful sonsofbitches in the world get down on their knees. Nixon pummels the carpet with his fist, sobbing, “What have I done? What has happened?” In The Memoirs of Richard Nixon, he shakes Kissinger’s hand, and they wish each other all the best.

Both books make excellent use of dialogue. Woodward and Bernstein use it to great effect on the night of Nixon’s resignation speech. A TV crew assembled in the Oval Office. Technicians tested his voice, and took light readings.

Nixon turns to one of them, and says, “Blondes, they say, photograph better than redheads.”

“Am I straight in the back?,” asks Nixon, in his last seconds as President of the United States of America. “Would you mind checking my collar? Is it – it’s not ruffled up?”

You can’t write a better ending than that, can you? Yes. Once again, Nixon’s book outdoes The Final Days. Source material for his memoir includes the diaries kept by his daughter Tricia. She wrote about the night of  Nixon’s resignation speech, “On Pennsylvania Avenue voices of a crowd chanting were heard. Mama misinterpreted and thought the group was one of supporters when actually it consisted of the same people who throughout Daddy’s presidency had hounded his every effort. Now they were singing JAIL TO THE CHIEF.”