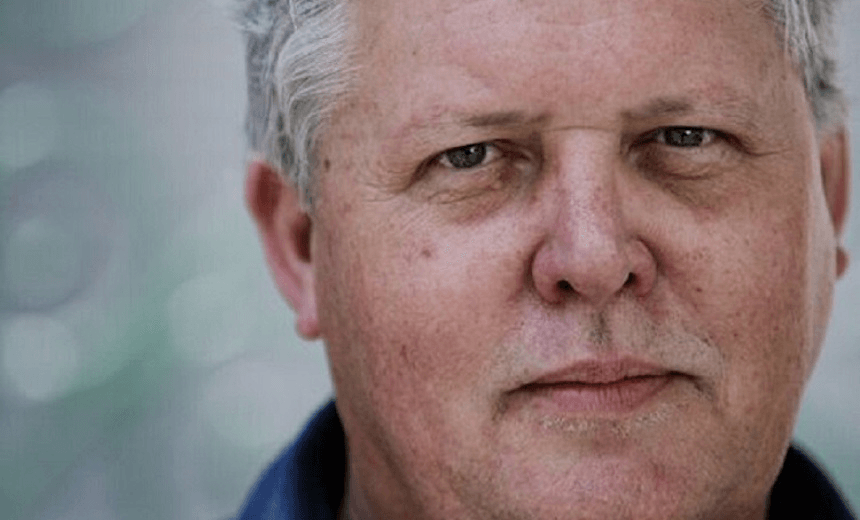 Ockham national book awards: and the winner is…who the hell is Stephen Daisley?

Forget Craig Marriner! We have a new strangest-ever winner of a New Zealand book award.

Woah! The award for best dressed female went to Stella Chrysostomou, manager of Page and Blackmore bookstore in Nelson, and the best dressed male prize went to poet Chris Tse, who wore like these feathery swan things on his shoulders, sort of like epaulettes. Oh and a writer who pretty much only 16 or 17 people in the book world have ever heard of was named the winner of the biggest literary award of the year last night at the 2016 Ockham New Zealand Book Awards.

Stephen Daisley, 60, a former shearer and musterer who served five years in an infantry regiment, was judged winner of the inaugural Acorn Foundation Literary Award for his novel Coming Rain – and pocketed a cool $50,000.

The shock was so thick at Tuesday night’s ceremony at the Auckland Town Hall that you could have cut it with a knife, although they didn’t serve any plates of food at the ceremony, so there wasn’t any knives. Thank God for that because going by the looks of the faces of one or two guests when Daisley’s name was called out they would have used one to slit their  throats.

Jaws dropped. Someone got up and left, possibly to go to the bathroom.  Somewhere a trumpet sounded, although that might have come from the bathroom.

There was also warm and generous applause. It brought an end to a fun, fast-paced ceremony; the new era of the national book awards, sponsored for the first time by Ockham, got off to a terrific start – an interesting range of winners (Daisley!), short speeches, no boring and expensive sit-down meal, three men wearing top hats, and expert MCing by Michele A’Court, who was so good that no one noticed she wore the drycleaning ticket on the back of her frock all night.

There were two choices of white wine and one of red, no beer. Jacinda Ardern got engaged in an intense conversation with Len Brown. Books judge Simon Wilson wore a cummerbund. Bridget Williams was the coolest person in the room; the venerable publisher looked like a rock star, thin and wise and stylish, which is to say she looked like Patti Smith. There were writers (Karyn Hay, Patricia Grace) and publishers (Fergus Barrowman, thingy from Penguin Random House). Grown men talked about Prince and Naz. Hungry women in colourful coats seized on the busboys and fondled their mozzarella balls. Arts “minister” Maggie Barry was there, merrily talking shit, and was memorably described by a guest as “a walking bollocks machine”: and when she introduced fiction finalist David Coventry, she called him David Courtney. She didn’t even have the wit to misname him David Coverdale!

But the vibes were otherwise all good. The average age was 54 years six months, there were two conspicuous G-strings, three improper suggestions (man to woman, woman to man, man to man – where were the sleazy lesbians?), four expressions of profound disllusionment with life, five guests got rotten drunk and one urinated in a potplant. Witi Ihimaera, who won the award for best book of non-fiction for Maori Boy, sang a pretty song in his acceptance speech. The man of the hour, Stephen Daisley, kept his speech short, and sincere; and when he left the stage, and the ceremony finished, guests said to each other: “Who?”

The author was born in 1955 in Raetihi. His father ran the local hotel. Daisley worked on shearing gangs, mustered, joined the army, and later hoofed it to Perth to work on cattle stations.

A love of reading and literature led him from Wilbur Smith to James Joyce and Emily Dickinson, and the urge to write fiction. “If you leap,”he told his wife, “the net will appear.”

Quite. Hs first novel, Traitor, picked up $80,000 as winner of Australia’s 2011 Prime Minister’s Literary Award for Fiction. It was also shortlisted for three major writing awards. There was a brief flurry of interest in New Zealand; he got interviewed by Kathryn Ryan on National Radio, and came across as a humble sort of rooster.

He set Traitor in Gallipoli, in World War I. It told the friendship of a New Zealander and a Turk, and asked the question: “What makes a soldier betray his country?”

Coming Rain, only his second novel, is set in western Australia in the 1950s. It focusses on the friendship between two shearers and it’s got a dingo in it.

The idea for the book came after overhearing the dialogue of two farmers at a stock sale.

“Gidday mate. Had any rain?”

It got some pretty good reviews here and there, but largely went under the radar in New Zealand – until last night.