Chloe Blades reviews a travel memoir about a pilgrimage, and invites us to share in her own.

I’ve often considered myself something of a holy person. I was seven when my nose bled in the pews of Notre Dame Cathedral. Mum said God was watching and I knew that, between my five-year-old sister and I, I was the chosen one. I attended Sunday School, prayed to God when I flew, and in adulthood developed a penchant for red wine, just like Jesus.

When I met Catharina van Bohemen, author of Ockham-longlisted memoir Towards Compostela, and told her that I too had embarked upon the Camino, we spent a brief moment debating who was holier.

In 1998, Catharina spent five weeks in north-western Spain, walking the Camino de Santiago (the Way of St James). It was once a pilgrimage for those holier-than-thou to ponder their sins: 780km on foot, for expiation at the tomb of St James. The writer went on a long reflective walk, alone. She got blisters, heard pilgrims bellow in their sleep from their shared bunks, and drank holy wine from a fountain. A nun had taught her that “walking was as unconscious as breathing or the beat of your heart, that stillness could be found in movement”. So she went away to be still.

Two decades later, I spent three weeks on a 2,500km pilgrimage from Barcelona into the French Pyrenees, across the Camino, through Portugal, and crossed into Seville to tie the knot. We called it “The Audi Pilgrimage” and I read Northanger Abbey aloud while stabilising a glass of wine from my air-conditioned throne. If you’re questioning my pilgrim authenticity, understand that van Bohemen, the holiest of pilgrims that I know, said “any road is a Camino – whoever you meet is a pilgrim”. By extension, all people are pilgrims. Chloe and Luis are people. Therefore, Chloe and Luis are pilgrims. One of the few similarities between van Bohemen’s pilgrimage and mine are our journals. She said hers was the most important thing in her pack. I also had a crumpled wedding dress and enough wine to last a year, and I couldn’t say what I’d save first if the car caught fire.

The main differences between our journals, aside from hers being worthy of publication, are her reflections on what’s around her as she walks, her knowledge of the Camino’s history, the churches and the chapels. There’s poetry from her talented offspring and three-dimensional portraits of all the kind souls she meets along the way. The published edition features drawings by Gregory O’Brien, immortalising the significant moments from her Camino.

My journal is overflowing with reflections. “Considering we’re in a car for seven hours a day and constantly in each other’s company I would say one argument isn’t too bad, especially when you think your driving’s better from the passenger seat.” “We’ve stopped at a cafe that’s under a church surrounded by pilgrims. We look like prime bellends getting out of an Audi donning a pleather backpack and Penelope Pitstop sunglasses.” Mine also has illustrations, but looking back I can’t decipher what they’re of.

Our 2017 trip was merely a grand tour until three years afterward, when I read Towards Compostela. I found myself identifying strongly with the purpose of her journey; I was in a similar state of uncertainty, I felt something was missing.

As I read, I found it exhilarating to discover the parallels between us. We both live in New Zealand; we have walked through the same door of a church perched on a remote hill in northern Spain. Van Bohemen, in turn, writes that she felt a similar sense of connection when she picked up a Dutch accent, heard the priest say “Nueva Zelanda”, or saw the names of other pilgrims she’d met on her Camino in guest books at the refugios.

Two decades apart, this writer and I looked up at the same two bell towers of the Church of Santa Maria del Camino. For her, the bells became “one of the comforting sounds in the dark” from the refugio below. I’d only veered off the motorway because I saw a sign that said “TAPAS”, and followed the arrow.

Van Bohemen stayed in a refugio in Carrion de los Condes, a convent of an enclosed order of nuns. A nun woke her early by standing beside her bed with a glass cup of holy water, praying. Personally I’d find that terrifying, but there’s a peaceful tone in van Bohemen’s description of the moment, a testament to her holiness, kindness and gentility.

At one point we stayed in a converted 11th century monastery. There were dark crevices under the staircases; wrought-iron gates hiding dusty pews, 10-foot crosses, and, I imagine, dead people. That night in bed I watched fog creep down the wolf- and bear-infested mountain slopes towards our window. Faceless monks hovered over me in my bed. I tried moving to wake Luis up. I had sweated so profusely I thought I’d peed myself, and I was paralysed. 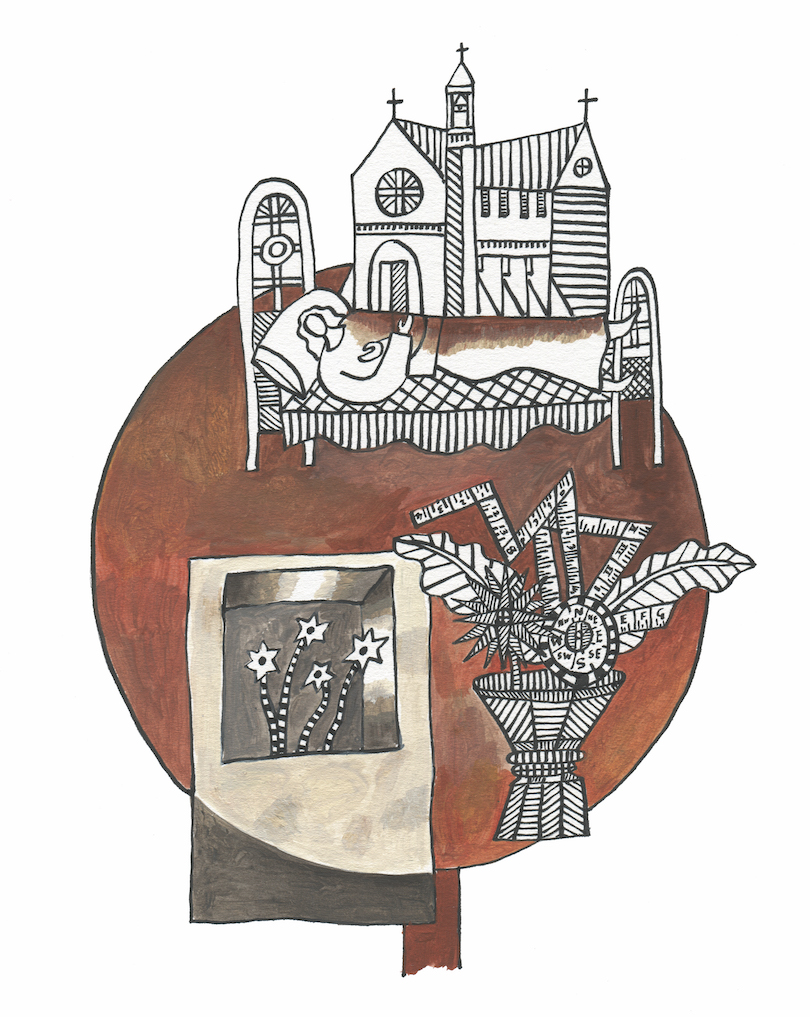 Forty kilometres south of Burgos, where van Bohemen had a not wholly unpleasant stay in a refugio, was the small, rural village of Lerma where I spent two nights in a parador. These are Spain’s monasteries or castles that succumbed to “economics rather than faith” and were turned into luxury hotels.

Some were stately homes built for royalty, where I could waft down concrete staircases lined with red carpets under renaissance art in an imaginary gown. In one parador, I wafted down with such little grace and so much confidence I missed a step, twisted my ankle as I fell, and fell face flat on the floor. I looked around to see if anyone could help a damsel, but I was on my own, looked down on by the towering portrait of a duchess.

It was perhaps not as humbling as van Bohemen’s experience in refugios, which are a poignant reminder of the kindness of humanity. In Calle Crucifijo, she stayed in a dormitory so packed it was hotboxed by the stench of sweat. She had managed a lukewarm shower after a full day of walking. As she made her bed, though, a young German man saw how small her mattress was and got out of his sleeping bag to find her a thicker one.

I wonder how many pilgrims thought Luis and I were middle-class pilgrims-in-drag looking to get in touch with our tedious inner selves, as a cyclist accused van Bohemen of. We were the polluters of peace. As she writes, the “Camino runs beside the motorway, so you’re reminded unhappily of the collision of time. You walk into churches where angels hover over altars, and when you come outside the present roars past.”

Although the Camino was even then on the cusp of being marred by what modern pilgrims walk to escape from, it’s irrelevant when you reach the end. As van Bohemen says, the “Camino itself is a bridge that has carried me to another place”, and that was learning “to trust in movement towards something, rather than an arrival at it”.

We had decided in Barcelona to have a baby. We sinned the breadth of the Camino, except in the 11th century monastery because he thought we’d spawn the devil if we did. In Lerma, he held my hand and said I really hope we have a baby and I took his and said I do too. But after our Audi pilgrimage, our wedding, and a year of trying, there was no baby. Three more years and we’d lost two and the trip was becoming a marker of time, constantly reminding us how far from Lerma we’d gone.

But as I write this, closing the last page on Towards Compostela, I am days away from giving birth. We have crossed the bridge, or we are about to, and the pilgrimage for us really was the journey rather than the arrival.

Towards Compostela, by Catharina van Bohemen (The Cuba Press, $38), is available from Unity Books Auckland and Wellington.

This content was created in paid partnership with Unity Books. Learn more about our partnerships here.