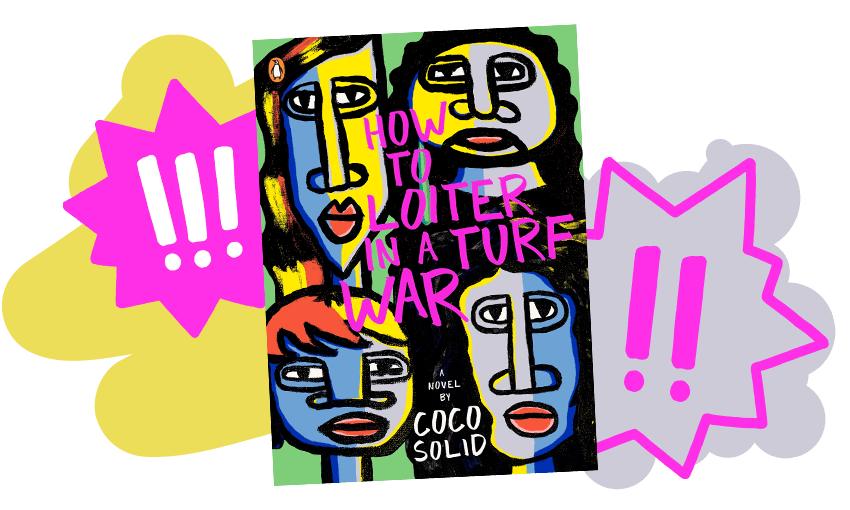 Jessica Hansell’s alter ego – rapper, director, producer, and actor Coco Solid – has written a semi-autobiographical memoir. We assume Jessica Hansell also had a hand in it. She told Viva that no matter the type of art, she’s always reaching for the same thing: “Underneath it all I’m always telling a story. I’m always tapping into the things I know. I’m always trying to resonate with the scattered, like-minded people I know are in the world and give them some reprieve, comfort and representation. That can transcend medium; I don’t think artists should deprive themselves of that. I’m just here to offer a sense of belonging to my people, but more specifically, the small pockets of weirdos.”

“Beevor has given us what may be his most brilliant book to date – a masterpiece of historical imagination, in which the tragedy and horror of this colossal struggle is recaptured, in its impact on everyday life as well as its military dimensions, as never before. This is a great book, whose depiction of savage inhumanity speaks powerfully to our present condition.” That from author John Gray.

We gave a small squeal of delight upon seeing that the new Sheila Heti novel is out. The Guardian didn’t squeal, but did call Pure Colour “brazenly strange” and “nothing less than vital”. Pure Colour’s particular flavour of strange includes the young female narrator spending 40 pages of the book within a leaf in the company of her dead father. Want more context? Too bad. We’re going to leaf (haha) you hanging so you’ve got to read Pure Colour yourself.

Stuff describes this follow up to Red Notice as “a nail-biting account of [Browder’s] efforts to expose the biggest snout in the biggest trough in the world.” That piggy would be Putin – and after reading just the blurb of Freezing Order … we feel rather anxious about having just called Putin a piggy.

The new poetry collection by the author of On Earth We Are Briefly Gorgeous.

8  Ikigai: The Japanese Secret to a Long and Happy Life by Francesc Miralles and Hector Garcia (Hutchinson, $30)

We think it’s something to do with what we ate for dinner.

A debut novel about a Vietnamese family which immigrates to New Orleans. From the New York Times: “The book opens in 1978, as a Vietnamese woman named Huong has escaped that city’s turmoil and brought her sons, Tuân and Bình, to New Orleans without her husband. Nguyen’s narrative strikes a very elusive balance: vast in scale and ambition, while luscious and inviting – enchanting, really – in its intimacy.

“Together, mother and sons have left one home behind in search of the possibility of another, but what constitutes a home metabolises differently for each of them. Huong finds a sort of solace in a new lover, a used-car salesman named Vinh, and Tuân gets involved with the Southern Boyz, a local gang of Vietnamese refugees. Bình, who adopts the name Ben, seeks comfort in his queerness, and the fracturing that his sexuality causes in his relationship to his family. Nguyen has created a revolving triptych of characters who, despite their closeness, or maybe even as a result of it, remain a paradox to one another.”

One windy little capital, five walking routes, 120 buildings. The weather is getting grim, but Wellingtonians are still keen as mustard to explore their city – or at least, to read about it.

Imagining Decolonisation in the bestsellers. One of life’s great constants.

And a shiny new constant! Fragments up here with its older sibling.

New local memoir. We loved it – here are some words by books editor Catherine Woulfe in support of you buying a copy: “Your heart breaks for her, and for the women of this family, and just for women – it transpires that both of Noelle’s grandmothers, overcome by shame or depression, walked into freezing rivers. One walked out again, worried about what the neighbours would think.

“Will Noelle walk into the river? We know she won’t, yet as in other recent, exceptional memoirs (I kept thinking of Tara Westover’s Educated and Charlotte Grimshaw’s The Mirror Book) there is a wicked anxiety here. We lurch about, clobbered by story after story, always with the sense that something worse is coming, that dark, lapping river is rising.”

7  Aroha: Māori Wisdom for a Contented Life Lived in Harmony with our Planet by Hinemoa Elder (Penguin Random House, $30)

Aroha has returned to the bestsellers recently, and we think there are two reasons: firstly, it’s fabulous. Secondly, Hinemoa Elder has a new book coming out soon – yes, horrifyingly, October can now be classified as “soon”.

Here’s a short description the author gave to Woman’s Weekly: “It’s about the Māori moon Hina, the female deity that guides us through each day and night of our Māori lunar calendar. I wanted to write a book that I wish I’d read when I was younger.”

The eighth detective novel in Herron’s Slough House series. It comes with a bonanza of tasty facts, including BBC calling Mick Herron “the le Carré of the future” and that the books are now an Apple TV+ series starring Gary Oldman and Kristin Scott Thomas.

Robin White has been creating art since the early 70s, and is now being recognised with a large retrospective of her work at Te Papa – and in the form of this glorious hardback in which, unusually, the words are on par with the splendid aesthetics.

The new, self-published memoir by Wellington GP Carol Shand, who has spent decades fighting for change in maternity care, contraceptive access, abortion law, and how sexual assault accusations are handled. Unity Wellington hosted the book launch last night and we can say with absolutely no certainty (we weren’t there) that it was a rager.

You bought loads of books this week. These are the books you bought the most of.
By The Spinoff Review of Books
⚖️
10th June, 2022

The Friday Poem: ‘I will not be applying to work with you’ by Emma Sidnam