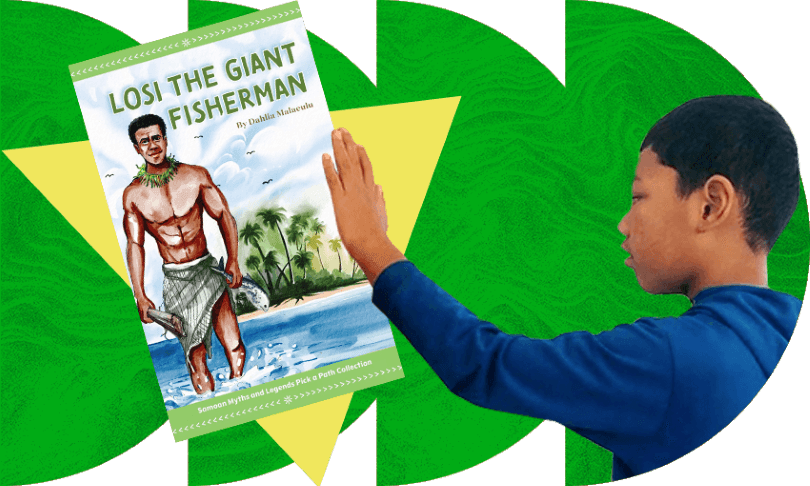 How a traditional Sāmoan tale is helping kids with sensory needs

Author Dahlia Malaeulu’s son, who has autism, was a key inspiration for a new choose-your-own-ending book which celebrates superheroes from Sāmoa in a way that’s never been done before.

It was an ordinary weekday afternoon for 10-year-old Mason Malaeulu and his parents. Mason went through his usual routine of taking his school uniform off and putting his lunchbox on the kitchen bench, before he took a moment to share his latest obsession – superheroes – with his mother, author Dahlia Malaeulu. Little did the two know that that afternoon in February would be the catalyst for the first pick-a-path book in the world about a well-known Sāmoan legend.

Titled Losi the Giant Fisherman, the book was recently published to mark Autism Awareness Month. It was inspired by Mason, who wanted a story on Sāmoan superheroes that met his sensory needs, as he’s autistic. That afternoon was the first time Dahlia and her husband sat down with Mason and his younger brother Isaia, who’s eight, to explain Mason’s “superpower” of autism.

Mason told his family about Spiderman and Optimus Prime before he asked his mother, “Are there any Sāmoan superheroes?” Dahlia Malaeulu explained that there are Sāmoan superheroes who were around a long time ago, and Mason recalled Tales of the Moana, a cartoon series about Polynesian myths and legends that features the god Tagaloa and Mason’s favourite, Losi the giant fisherman. Losi is a mischievous yet loyal friend to sea creatures and all humans whose heroic moment is bringing taro, which is the food of the gods, to Earth. The story of Losi highlights the effects of overfishing and the importance of protecting marine ecosystems.

The topic of autism arose and they began to talk about the differences that Mason noticed about himself. He compared his unique features to Losi, pointing out that Losi’s gigantic facial features and body parts are what make him special as he uses his huge hands to change the world by bringing taro to Earth.

Mason then turned to his mother and said, “I want to tell the world about Losi, then everyone can know about our Sāmoan superheroes and how they’re different too,” and immediately his mother’s author mode kicked in. She wanted to create a book that would make autistic children see their differences as similar to Losi’s differences, and understand that their unique features are their superpowers. It was important to her that Mason be directly involved in the book’s creation.

In 2019, Dahlia Malaeulu released her first books in the Mila’s My Gagana series, a set of three early language readers for pre-school and junior primary aged children. She also created Mila’s My Aganu’u series, the first picture book stories in the world written, edited, illustrated, designed and published by an all Pasifika team.

For Losi the Giant Fisherman, Malaeulu  says she did some research into the origins of the tale and found there were a number of different versions to the story of Losi. “When I asked Mason which version he wanted to go with he said, ‘include all of them’, which is where the idea to make it a pick-a-path book was born – which means there’s more than one ending,” Malaeulu says. When you get to page 16, for example, there are two options; Losi returns to the village, go to page 30, or the gods wake up, go to page 46. The reader is in control of the story.

Mason had other suggestions that were taken on board too: he thought it was best to have shorter paragraphs so it was easier to digest, larger font so it was easier to read, and black and white illustrations. Mason explained to his mother that it was important to “give people a break from colours because it sometimes hurts people’s eyes like how noise hurts my ears”. The illustrations are playful to help visually engage readers, especially those with sensory issues.

After just four weeks, the book was complete.

Malaeulu wants to ensure she creates stories that help Pasifika people be seen, heard and valued through language, culture and identity, “because if we can’t see ourselves in something as simple as a book, what is that telling us or our children? What’s our place in this world?” Losi the Giant Fisherman introduces knowledge around important Polynesian elements such as different gods (Tagaloa, Faʻatiu, Mafuiʻe), Sāmoan umu and the importance of vā (the sacred space between people where connections and relationships live) and restoring it in Polynesian cultures.

“Over the years as an author, I’ve found that there’s a lot of Pacific people who don’t know much about their myths and legends because of our oral storytelling traditions, and there’s a real threat of losing those stories because they might get passed down and get lost in translation,” says Malaeulu. “So having a physical copy of a tale was crucial in a sense of ensuring our stories are still around for future generations.”

Malaeulu also wanted the book to raise awareness of autism spectrum disorder (ASD) in the Pasifika community. When telling her extended family about autism, Malaeulu found that a large number of them didn’t know what ASD was, she says.

According to a Ministry of Health report, there’s no formal research to date that addresses issues of ASD in the Pacific population in Aotearoa, and its prevalence is unknown. However, research on general disability and Pacific people living in Aotearoa estimates that one in seven (or 28,100) Pacific people has a disability, of whom 21% are children. Seventy-two percent of Pacific people with disability live in the most socioeconomically deprived areas of Aotearoa.

Malaeulu says her book is ideal for middle and senior primary-aged students, families and educators, so that “we can all understand a Sāmoan tale through the eyes of someone who is neurodiverse”.

Losi the Giant Fisherman is available as an ebook and paperback via Amazon.