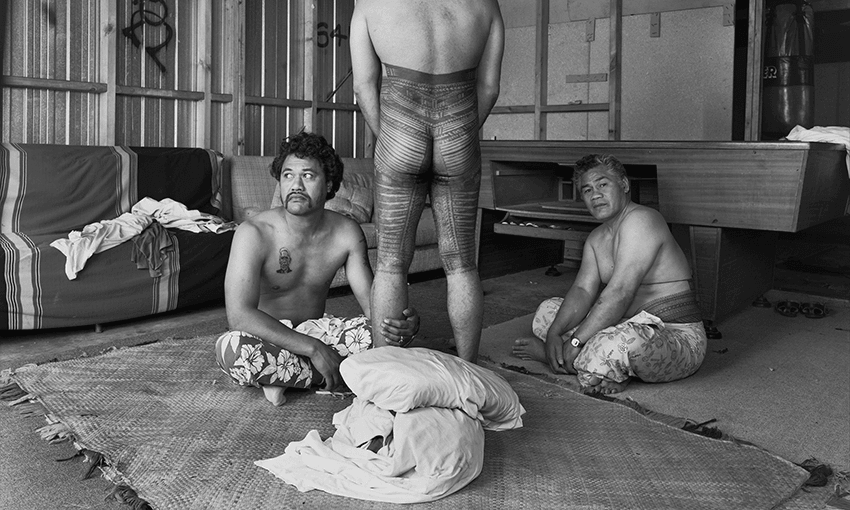 Red roses, cartoons and tatau: an extract from a newly-crowned Ockhams winner

Tatau: A History of Sāmoan Tattooing won the Illustrated Non-Fiction category at the Ockham New Zealand Book Awards last night. Convenor Douglas Lloyd Jenkins called it “a visual feast… a milestone in contemporary publishing… a book that will expand and enrich the knowledge of readers throughout Aotearoa, the Pacific and beyond”. Here, authors Sean Mallon and Sebastien Galliot detail how the tattoos of other cultures are bleeding into Sāmoa, and vice versa.

In 2002 in Apia, the capital city of Sāmoa, there were two tattooing shops. Like the stereotypical image of tattoo parlours in the West that are often found in grimy back alleys and red-light districts where rent is cheap, the Apia tattoo shops were in a rundown semi-industrial area of town near a large fruit and produce market. The streets in this part of town were memorable for their litter, open drains and hungry-looking dogs. The tattoo shops were on the periphery of the market and situated about 100 metres apart.

One of the shops was a small rectangular shed with a single window and door. It sat alongside a dusty track, almost crushed into a corner; noisy trucks converted into buses would veer past it, carrying loads of passengers out of the market and back to the villages. A notice in perfectly rendered blue gothic lettering announced ‘tattoo fale tapea’ (house of tattooing). The other shop looked out on to the street through a row of windows with heavy wooden shutters. Inside dozens of A4 sheets of tattoo flash (designs) fixed with bright red tape lined the pale blue walls. Both shops were in an environment where business is intense, where goods are sold, where transactions of all kinds take place.

I visited both of the Apia tattoo shops, walking first up to the fale tapea. Peering inside I could see a long wall covered with dozens of images that customers could choose to have tattooed on their bodies. As I leaned in the doorway, the proprietor approached me and we struck up a conversation. Looking at his wall of tattoo flash, I could see that they ranged from Marquesan tattoos to hearts and roses; there were Christian symbols and the skull and crossbones, and a drawing of the Sāmoan male pe‘a. I asked the owner what designs were most popular with his local Sāmoan clientele. Without hesitation he pointed to a black and white outline of the Statue of Liberty.

I had a similar experience in the other tattooing shop. The walls there were also a catalogue of international tattoo flash, from military insignia to cartoon characters. Two young men in their late teens were in the shop and I asked them what tattoo designs were the most popular in Apia at the moment – what tattoos they and their friends were interested in. Both pointed to the abstract black curved lines of a neotribal pattern that probably originated in US tattooing circles and – here in a Sāmoan tattoo shop – was most likely copied from a tattooing magazine. A few minutes later three women emerged from the tattooing room, one of them proudly wearing a bright red rose freshly tattooed on her shoulder. Seeing this woman tattooed with a red rose, and discovering that the most popular contemporary designs originated in the United States, highlighted some contradictions that I thought were worth investigating further.

Within contemporary Sāmoan society tattooing is well established as emblematic of Sāmoan culture – it is an indigenous practice with a long history. There are distinct male and female forms of tatau that are widely and positively upheld in Sāmoan society as symbols of Sāmoan culture. Yet in spite of this reification of tatau in Sāmoa, my experiences in Apia’s tattoo shops suggested that tattoos originating from other countries are somehow relevant to Sāmoan society. It reinforced the idea – argued throughout this book – that tattooing in Sāmoa is not just about Sāmoan tatau, and that Sāmoan tattooing might not be the stable, culturally homogeneous practice that is objectified and upheld as emblematic of Sāmoan culture.

The two family lines of sā Su‘a and sā Tulou‘ena are still widely acknowledged in Sāmoan society today as the custodians of tatau. However, while they are perceived by Sāmoan society as agents for the control and persistence of tatau, they are also among the most active agents for its transformation. Tattooing in Sāmoa has always been subject to local (Sāmoan) and translocal influences, but these processes have been at their most intense since the 1990s. The ease of communication between different groups of people today makes it easy to recognise how cultural symbols like tatau and associated ideas and information move on global cultural flows. Understanding circulation of tatau and the juxtaposition of its various contexts gives us a greater the appreciation of the transnational and international systems of which it is a part.

The increasingly global practice of Sāmoan tā tatau means that tatau is open to a wider range of interpretations from many different groups of people – Sāmoan and others; and even those who are Sāmoan don’t all think similarly. There are many ways in which tatau acquires significance in our societies and cultures, and many perspectives on its value and meaning. One useful approach to understanding the globalization of tatau involves what some researchers call ‘following the thing’: anthropologists, for example, have used this strategy to study cultural phenomena across multiple sites; other Pacific-based researchers have employed it to trace the movement of hip hop music, or the use of phosphate rock for fertiliser. In the case of Sāmoan tatau, ‘following the thing’ involves following the circulation and appropriation of tatau through different contexts, examining how, why and where people use it and the many ways they give it meaning. It is a process of mapping the connections, associations and various relationships that tatau mediates in order to understand how they are articulated.

From at least the 1980s tufuga tā tatau have been taking tatau to the world in an unprecedented way – working in Sāmoa and beyond its borders, and also beyond the Pacific Islands. They have travelled to non-Sāmoan communities in the United States and Europe and demonstrated tā tatau at tattooing conventions and exhibitions. They have toured to Sāmoan communities in New Zealand, Australia and the United States. After Su‘a Sulu‘ape Paulo’s death in 1999, his brother Su‘a Sulu‘ape Alaiva‘a Petelo became the most active family member tattooing Sāmoans and non-Sāmoans overseas. His schedule in 2002 included visits to Hawai‘i in July and August, where he completed nine pe‘a in six weeks; he then returned to Hawai‘i to complete three more pe‘a. In a throwback to the practices of his ancient border-crossing ancestors, Alaiva‘a and his team worked on Tongans Ata‘ata Fineanganofo of San Francisco and later Hawai‘i-based Tongan tattooist ‘Aisea Toetu‘u, reproducing on them a Tongan version of a pe‘a based on a rare drawing made by Louis Auguste de Sainson during the voyage of Dumont d’Urville between 1826 and 1828. They were then booked to fly to the United States for a week, to Sweden for a few days, then to Germany for a convention, then on to another in Malmö and back to Sāmoa – all in under five weeks.

These overseas engagements helped to create an awareness of Sāmoan tatau globally and provided new opportunities for the tufuga tā tatau to meet and share their work with other tattooing enthusiasts. In the new millennium there have been more frequent overseas tours, and further invitations to participate in tattooing conventions – resulting in a diversification of the places where tatau was being made, who was making it and who was wearing it. The international interest in tatau among Sāmoans and non-Sāmoans was the catalyst for major transformations in the work and lives of the tufuga. Financially, the tours had a big impact at home, with benefits for the tufuga, their families and, in some cases, their villages. Culturally, the tufuga were travelling and seeing the world; socially, they were enhancing their status as tattooists, as artists and as cosmopolitans.

Tatau: A History of Sāmoan Tattooing by Sean Mallon and Sébastien Galliot (Te Papa Press, $75) is available at Unity Books.

Images and text reproduced with permission.