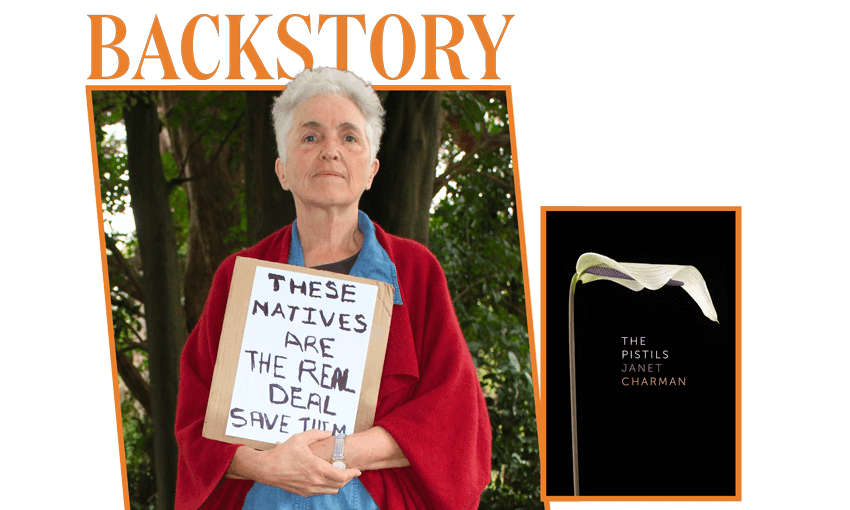 By Janet Charman
Guest writer
Made possible by

We asked acclaimed Auckland poet Janet Charman to write about her poem called things you’ll never know about breakfast, which appears in her new collection The Pistils, and at the end of this essay.

Nine months after the death of my spouse, this new collection of poems, The Pistils, is being published by Otago University Press. Nine months is a symbolically gestational period of time elapsed, which for me calls to mind the saying: the old moon in the arms of the new. A comforting phrase that treasures the circle of life – whether in decline or renewal.

But in this Covid era, strangely untoward events are challenging everyone. And in my case, the personal losses all of us are feeling come accompanied by a kind of imposter syndrome. I’ve heard this concept applied to those whose career advancements are hobbled by their anxious and awkward sense of disbelief in their own legitimacy. But in grieving the death of my partner, I was unprepared when these same awkward emotions of non-entitlement affected me.

Out of nowhere come waves of astonishment that Max is not here. But these understandable feelings are often accompanied by a disturbing sense that to mourn his loss is somehow fraudulent. I think this is partly because in recent times so many people, everywhere, have lost so much: Afghanis; Ukrainians; the Christchurch massacre survivors; the Covid bereaved; and the Covid exhausted. But my odd feeling of non-entitlement also registers that despite a near universal climate of existential suffering, paradoxically, in my own daily life, I have felt wrapped in a warmly insulating shelter of normality. A sense of security, which is due to the kindness and generosity of my kin and friendship networks. They have seen to it that my knowledge of the irreversibility of Max’s loss pierces me only intermittently.

All through his health professionals’ valiantly offered (and on Max’s part, valiantly endured) surgery and chemo, we were incrementally conditioned to expect his death. Yet the end, when it came, was for him still shocking – shocking to both of us. Our family was fortunate nonetheless, since Max’s death occurred at a time in the Covid lockdown cycles when extended family, friends and his beloved ex-students – cherished contacts from his long career as an art educator – were at least allowed to gather together, to mourn and celebrate his life. I feel so very sorry for, and I mihi to, anyone who on account of quarantine, couldn’t share their grief in company, as we were able to.

The Pistils has only a handful of poems that directly reference these distressing circumstances of loss, but when I read over the unrelated poems collected here, pieces which were written under completely different conditions – and in a few cases, years earlier – I find many have, for me, acquired an elegiac dimension I would not previously have suspected.

During Max’s last months, he was mainly home-focused. Still cooking dinner for us every night, as he had for as long as I knew him – apart from the times he was off roaming the world with his camera. And through that same period, every morning, after I finished the dishes, I was spending several hours at the peaceful “Save the Canal Road Trees” occupation in Avondale. We failed there. The cowardly poisoning by persons unknown of all but one pōhutukawa, among the rare canopy natives growing in this historic 100-year-old arboretum, was done covertly. The death of this grove of healthy trees will have allowed the developer, who had purchased the site, to up his profits from its build potential. The plea we had put before him, to negotiate with the community to retain these rare, mature, indigenous trees in public ownership – a land swap development plan enabled through the good graces of enlightened public servants at Kāinga Ora – was presented to him in good faith under the auspices of our local MP, Carmel Sepuloni. It was a plan he spurned.

you surveilled the microwave window

tracking our porridge to forestall a lava flow

but now i cook my oats in a deeper bowl

and can look away

go to Switzerland on TV

instead of your weeks’ worth of stewed

we ate at our table

looked at each other

television was a no go

i only allowed the radio

but your dispersal has blown me

perched on our respective couches

necessary to mop up

The Pistils, by Janet Charman (Otago University Press, $25) is available from Unity Books Auckland and Wellington.