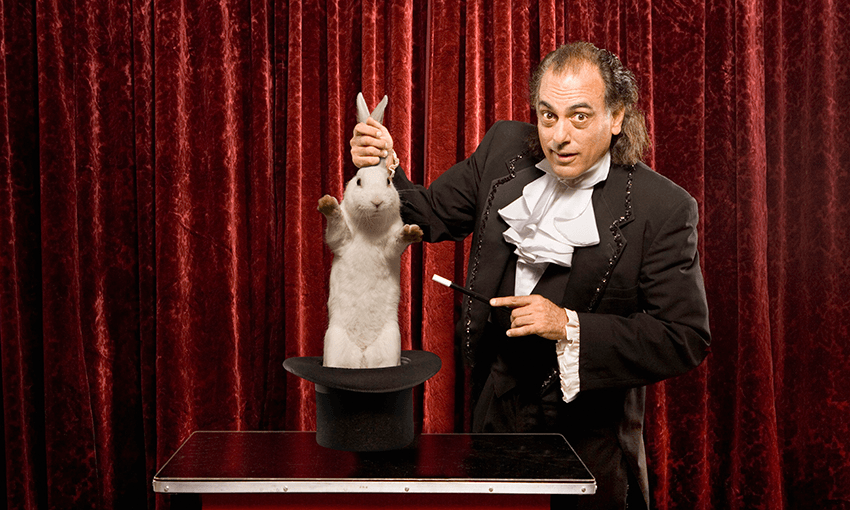 The Friday Poem: ‘The Magician—Notes on distraction’ by Chris Tse

Every time I turn to see where I should be looking

I see my reflection.

There is so much of the world within reach

from your desk—screens within screens, and holes

within holes—tails wagging dogs, and newspapers

and not knowing why you wake up every morning

It’s a story so vivid you keep repeating it

as if it were yours to tell, pulling up your sleeves and

You think you know this story and who is

telling it. Don’t be surprised when a door slam shuts

and you find yourself asking, How long has that door

My reflection is a magician—he tells me where to look.

Inside every poem is a stage with trapdoors.

Inside every poem is a smoke machine.

Inside every poem is a mirror

buried in the volta,

and, once found and gazed upon, it shows you

what you missed as you were following the tip

The Magician tells you where to look, and so you look

instructions. But, as a spectator, the trick is to expect

everything and nothing at the same time.

The trick is to

watch the wand while your left hand is behind your back

texting the revelation to your past self, so when you reach

the reveal you have seen The Magician’s flourish in all

a door you’ve never noticed, a secret way in and out.

Anything could be placed before you undetected.

Of course it’s been there the whole time. You’ve spent

your entire life with your body pushed up against

the door, but the crowd beating on the other side

is louder and demands entertainment.

They spend the running time convincing us it’s

and while our eyes are scanning for the slightest

we don’t see them set fire to the scenery,

the strike of the match disguised by our applause.

With so much happening in this world

to resist everything that demands my attention,

and harder to tell

what I unknowingly steal from myself when I fall

for another smoke screen.

Over here’s shattered glass scattered over the pavement,

begging to be written about. Meanwhile, I’ve not noticed

that the source of this glass

knees to interrogate each shard.

It’s a spot the difference game where one picture

and the other is an upstairs neighbour dragging furniture

across hardwood floors at two in the morning.

The Magician tells me sleep is the biggest distraction
of all. There’s no joy

in surrendering to the screens behind my eyes

where everything I believe to be true is a wrong memory,

an echo I’ve been too happy to be swallowed by.

In the morning, everything is the same but shifted

slightly to the right—and during the night someone has

turned all your books around so their spines are now

both The Magician and the audience

the matches between them, call and

response running in both directions.

Can we still call this power?

And, if so, how many walls

will be left standing

It’s from the wings that I see what haunts me.

Ignorance won’t save me, no matter how many

doors I open and shut just to keep myself busy.

us back each time.

If you are a person of colour, you don’t get to live

through a national conversation about racism and

shame without taking multiple hits to the body.

wondering whether someone will pick you up just to

in a burning building while everyone on Twitter is

saying it’s not fire but a smoke machine doing what

it’s been told to do. A blind man doesn’t need to see

a fire to know the rush of standing in a burning

building, and if he stands there long enough he will

be taken by the flames. So much debate rests on

about the consequences of making the cause the story.

Who is telling this story? Well, it depends on whether

from the debris. Sometimes we have to tell these stories

because the rest of the world is watching The Magician

disappear an invisible elephant that was never there

in the first place. And behind the door you never noticed,

a series of doors. That is the story you should be telling.

I see my reflection.

every time I turn to see where I should be looking.