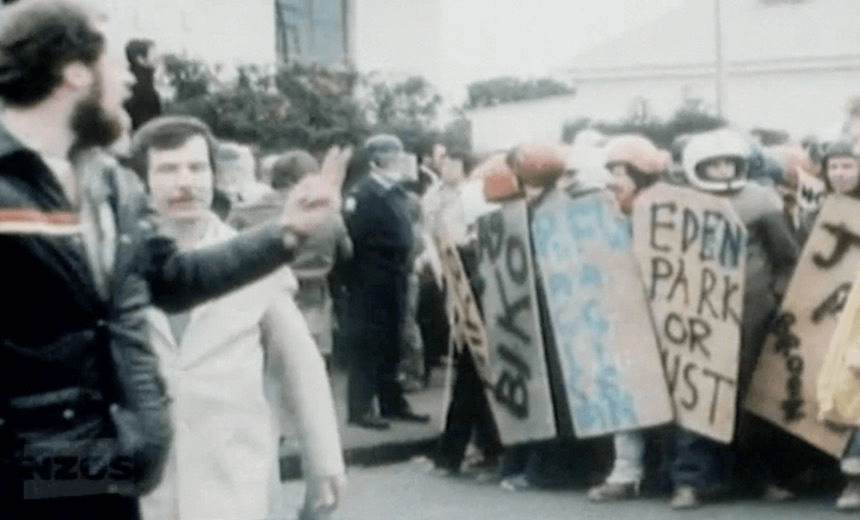 There are some lovely lucid moments in Fiona Kidman’s latest novel, says Charlotte Graham, and it’s a reminder that “you’re reading a boss”. If only the book was longer.

Dame Fiona Kidman told an interviewer recently that she thought barreling through seven decades of New Zealand history with “a story integrated” was “an interesting exercise to set myself.” The resulting book is her new novel, All Day at the Movies.

There’s something gutsy about writing, basically, A Little Life meets A Penguin Recent History of White People in New Zealand, structured as what Kidman calls an “episodic novel,” and then calling it an interesting exercise to set yourself. It means I don’t feel bad saying that I don’t think it works, except as an exercise.

All Day at the Movies clocks in at a slim 319 pages. It’s an ambitious thing, seven decades of New Zealand history with story integrated in 319 pages of quite big writing. It probably needed to be twice as long to get the job done properly.

The book is about several generations of the same family, suffering and being redeemed, struggling against shit that happens in life, or giving into it. It’s set between the Far North and Campbell Island, between 1952 and 2015. Kidman clearly wanted to follow the same family through their own history and through New Zealand’s. But there’s so much plot exposition required every time we catch up with a character that it gets in the way of everything: the dialogue, the plot, the characterisation, the action. It means a lot of telling, and it stopped me ever really having my heart broken by any one character, which seemed to be what she was driving at.

The book starts with Irene, heading south from Wellington to the tobacco fields of Motueka in 1952, war widowed and with child in tow. Irene is plucky. She meets a hot guy who dies and a gross guy she has to hook up with because she’s pregnant with the hot dead guy’s baby (not really spoilers, this happens really fast) and that sort of thing used to be a big deal.

Chapter one is the start of a cracking good yarn about Irene. At the start of chapter two, Irene is dying. A couple of pages later, she’s dead. I’d only just realised that I quite liked Irene. But we’re off at a clip to watch the next generation, Irene’s children, acquiring a shitty new stepmother who burns their mum’s things in front of them. Their dad is also awful: an incestuous, alcoholic rapist and total douchebag. It’s a lot. Irene’s kids form the mainstay of the rest of the book; Belinda, her daughter with the hot dead guy from the tobacco fields, is the best-developed of the bunch. She’s a bad-ass feminist who gets pregnant very young, weathers the inevitable storm about it and gets her shit together, becoming a documentary-maker and trying to keep an eye on her battle-scarred and errant siblings.

The family pegs its remembrance of its own history to where they were (often miraculously close) during similarly timed current events of import to New Zealand. Family drama unfolds the night they pay their respects to Norm Kirk. It unfolds while family members are getting arrested for protesting the Springbok tour. This is part of what initially made the book appealing to me; a sense of how families like mine (white; blue collar) interacted with these parts of their histories.

After a while, something about it rang false. My father marks years with things like “the last time I saw a doctor” (1975, he alleges) or “the time I drove a cop home from the pub without a license.” How Kidman’s characters interact with history gives, at points, a rich sense of time and place, but also starts to stretch credulity. This family is everywhere in New Zealand history and has A Lot of Very Profound Feels about all of it.

There are some lovely lucid moments which show off Kidman’s mastery and make you remember you’re reading a boss. Grant, another of Irene’s children, steals a dead baby’s identity and escapes to a high country farm. When he gets there, there are bursts of stunning description, beautiful language. But the plot gallops on, and we’re back to more telling.

When we last see Grant he has, offstage, had a mental breakdown, tried to kill himself, resumed his old identity, and is apparently living in a psychiatric ward. This is all, again, glossed over quickly. Kidman’s got to bring you up to speed really fast so that the conversation the characters are having in a cafe makes sense. It’s a pity, because by the end I did actually sort of care about Grant, and I feel as though his story alone was one of about eight different books this novel could have been.

You get the sense that Dame Fiona Kidman has a zillion stories left to tell. She has wisdom to share about a time in New Zealand’s history that people my age should hear more of, with the kind of stories I wish my family had about our place in it. There just isn’t room for this much of it in one short book.

All Day at the Movies (Penguin, $38) is available at Unity Books.