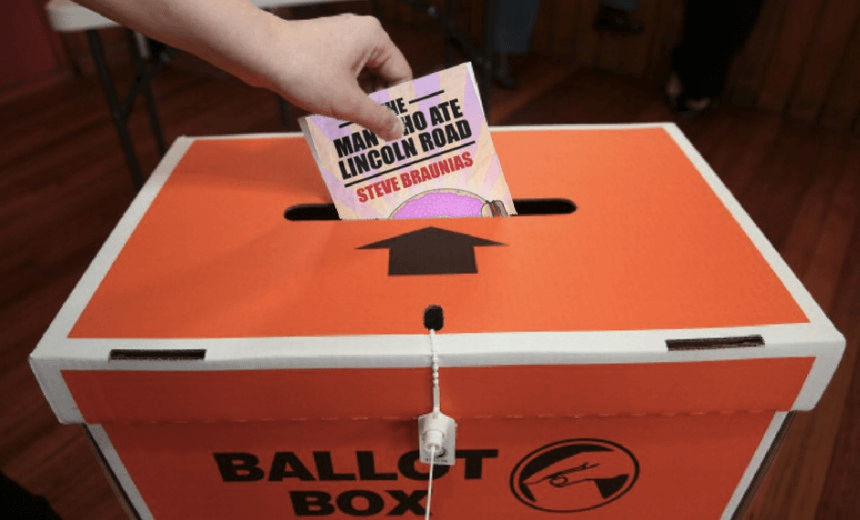 The best-selling books at the two best bookstores for people who like reading books.

The record of a woman who lost a political election to a lying sack of shit.

Eger was 16 when the Nazis came to her hometown in Hungary and took her Jewish family to an interment center and then to Auschwitz. Her parents were sent to the gas chamber by Joseph Mengele soon after they arrived at the camp. Hours later Mengele demanded that Edie dance a waltz to “The Blue Danube” and rewarded her with a loaf of bread that she shared with her fellow prisoners. These women later helped save Edie’s life…A survivor’s story.

Spy thriller by the old master.

4 Girl Who Takes an Eye for an Eye by David Lagercrantz (MacLehose Press, $38)

The great historian wrote in the Herald this week, “Jacindamania isn’t about personality at all – it’s a collective sigh of relief that we might finally have a kind of leadership that reflects our core values as New Zealanders….National have run a classically neo-liberal campaign, based on cynical self-interest. It was sad watching Bill English in the last leader’s debate – a fundamentally decent man lying through his teeth to try and win the election.”

“An extraordinary novel by a writer not yet famous but surely destined to be acclaimed by anyone who believes that the novel is not dead and that novelists are not merely lit-fest fodder for the metropolitan middle classes:” OTT review, The Guardian.

Longlisted for the 2017 Man Booker prize but passed over in favour of a piece of shit by Paul Auster and a piece of shit by Ali Smith. Pay it no mind; this is a dynamic, ingenious sci-fi allegory about feminism, and one of the three or four best novels of the year.

“Baby, the debut novel from the rudely 23-year-old Annaleese Jochems, signals the arrival of a terrifying talent. It exists in the world of modern Auckland, with its cults of fitness instructors and its inhabitants’ way of seeing the rest of the country as a kind of scenic backdrop to the city:” review by Louisa Kasza, The Spinoff Review of Books.

1 Out of the Woods: Journey Through Depression & Anxiety by Brent Williams, illustrated by Öztekin Korkut (Educational Resources $40)

A survivor’s story. Williams takes the graphic novel format and uses it to craft a raw and powerful memoir of a violent family upbringing – his father, Wellington philanthropist Sir Arthur Williams, was a yelling, abusive tyrant – and his later descent into depression, and, ultimately, recovery.

2 Unity Books at 50: excerpts by author-booksellers over half a century of trading edited by Jane Parkin (Unity Books Wellington, $8)

The story of the best bookstore in the universe.

“Mansfield’s childhood environment was one of striking contrasts: the harsh beauty of the landscape and weather, the squalor in the urban streets. Yska describes a town filled with hazards, most especially the threat of disease from primitive (or non-existent) sewerage systems and open drains. His research has uncovered the unsavoury fact that by the turn of the century, hundreds of Wellington’s citizens were dying from diseases caused by poor sanitation, among them cholera”: review by Charlotte Grimshaw, The Spinoff Review of Books.

“Honestly i am a doe-eyed idealist sap but every time I see the phrase ‘the politics of love’ I let out a groan like a dying blue whale”: Tess McClure, Vice writer, on Twitter this week.

7 Māori at Home: An Everyday Guide to Learning the Māori Language by Scotty & Stacey Morrison (Raupo, $35)

Māori language week is every week.

8 Can You Tolerate This? by Ashleigh Young (Victoria University Press, $30)

“Pearls of wisdom contained in proverbs – whakatauki – have been gifted from generation to generation as an intrinsic part of the Māori world. Mauri Ora links whakatauki to key personal virtues idealised across cultures and generations. The virtues – wisdom, courage, compassion, integrity, self-mastery and belief – stem from the science of positive psychology; the study of how to live a better life. Illustrated throughout with wonderful photographs from an old world, this book draws on traditional wisdom to provide a recipe for personal effectiveness and leadership, and a rewarding connection of Māori knowledge to contemporary thinking about personal happiness and fulfilment:” review from Muir’s Bookshop in Gisborne.

Yes but who will be the Prime Minister that Espiner interviews on Morning Report on Monday?