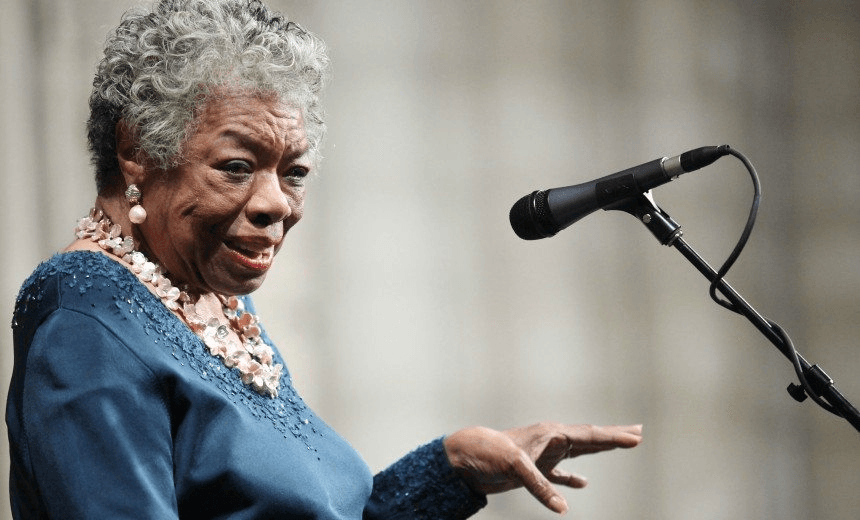 To mark National Poetry Day, Steve Braunias reveals his correspondence with one of the world’s most celebrated poets.

A few weeks ago I thought: hm I know, let’s see if any of the world’s most well-known living poets will write a poem for the Spinoff Review of Books. I drew up a list and got in touch with the various representatives of John Ashberry, Carol Ann Duffy, Billy Collins, Donald Hall, John Cooper Clarke, Linton Kwesi Johnson and others. The only person who got back was a woman acting on behalf of Maya Angelou.

Maya Angelou! Legend, sacred, “inspirational”. The thinking person’s Oprah sort of thing. She read one of her poems at Bill Clinton’s inauguration. Obama once gave her an important medal; surely she could give the Spinoff a poem? But I sort of overlooked one minor detail, as ultimately revealed in the email correspondence….

Hello there. I hope this finds you well. My name is Steve Braunias, editor of the Spinoff Review of Books online literary journal in New Zealand.

I am writing to you to enquire whether we could buy any new or unpublished verse by Maya Angelou. If she was willing to do so, what is the fee, please?

Hi Steve and thank you for your request. So you would like to post a poem on your website? Is your electronic publication also sold as a paper journal or only electronic? If also paper, do you charge for the paper edition? Also, we have many quotes we can license if that is something that interests you. Would you need a photo to go along with post? I look forward to hearing from you.

Many thanks for your reply. Yes, we would love to post a new or unpublished poem by Maya on our website, which is electronic only – there is no hard copy. We publish poetry every Friday.

I’m not quite sure what you mean by quotes. In any case, all I’m interested in is her poetry.

Thanks Stephen. Can you tell me how long the poem would be up on the website if you do a new one every Friday? I assume you swap it out and get rid of the one used the week before.

Normally they just stay up there forever, really! But I guess we could always run it for a few days and then take it down, if that’s what you prefer?

Hi Stephen. How about $500 for a month for this poem? [Enclosed is “Touched by an Angel”]. Does that work? I look forward to hearing from you.

Hi Stephen. I think that would be o.k. We are talking USD, right? Also, would you only need 4 weeks then?

Cool! Ha yes USD. How about $100 for one week, and we will take it down when that 7-day period comes to an end. Does that sound okay?

Re the poem – is it new, or previously unpublished? That’s very important we have something original, and not seen until now.

Sorry Stephen about the poem. It has been published but it is not as well known as the others. Most likely, NZ will be new to this poem.

You have to understand, Dr. Angelou’s poems and books have been an instant success here in the US so finding something not published is almost unheard of. If we did have an unpublished poem, we certainly would not grant first publishing rights for only $100.

Forget it in that case, it’s pointless to continue.

Hi Steve. My client approved this use. If you can tell us what name you want as the Licensee on the agreement I’m sending and the address for the Licensee, I can issue a license. Also, do you know which week you want to add it (i.e., this week, next week, etc.)?  I look forward to hearing from you.

Thanks but you don’t appear to have read my earlier email in which I wrote, “Forget it.”

Let me make it plain: I don’t want to use it at all.

I only want a new or unpublished poem. It doesn’t seem like an unreasonable request. Why on earth do you think I would want some old poem that’s already been published? All magazines or sites only publish new material. It’s a fairly basic premise. But there you are, banging on about licenses, and thinking it’s alright to offer used, second-hand verse! Incredible.

Understood Steve and I’m sorry for the miscommunication. In case you’re not aware, Dr. Angelou died in May of 2014 so there aren’t any “new poems”…