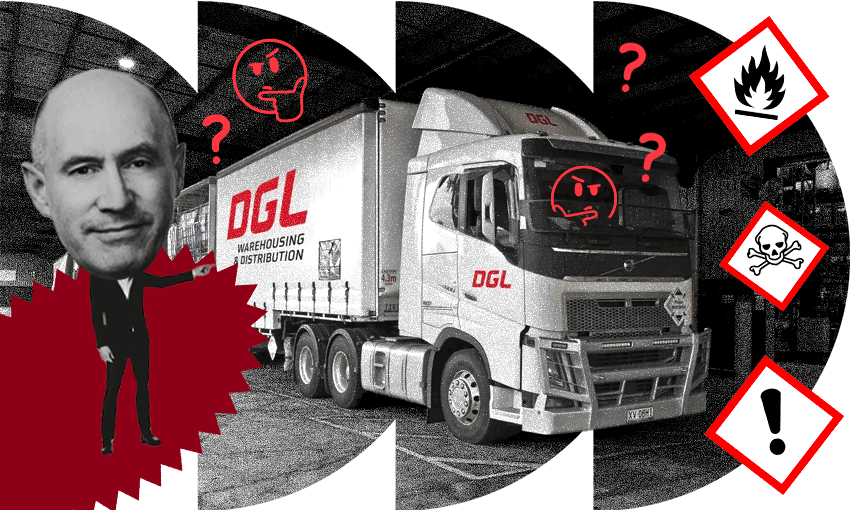 The company formerly known as ‘Dangerous Goods Logistics’ has been all over the news since its CEO’s offensive comments about Nadia Lim went public. What does it actually do, and who even is Simon Henry?

DGL Group Simon Henry’s “sincere and formal” apology finally reached Nadia Lim a week after his offensive remarks about the MasterChef New Zealand winner and My Food Bag co-founder were published by the NBR.

The email apology – all two sentences’ worth once formalities are removed – is the latest development in a story that’s captured national and international headlines, and engulfed Henry’s chemicals manufacturing company in controversy. The price of its shares on the local and Australian stock exchanges plummeted after NBR published its interview with Henry, wiping nearly $300 million off its value. One leading Australian-based DGL customer, Ixom, has raised concerns, fund managers have blacklisted the company, even the prime minister has weighed in.

It’s a lot of public scrutiny for a public company that had been privately owned for 21 of its 22 years of existence. So what does DGL do, how has it grown and who even is Simon Henry?

DGL is short for “Dangerous Goods Logistics” – the company’s former name and an apt description of its work. It’s been around since 1999, when Henry entered the chemicals manufacturing industry after stints in commercial property investment and beekeeping. DGL’s founder envisioned a fully integrated, end-to-end business that could manufacture, transport and store, and dispose of or recycle potentially dangerous and reactive chemicals and goods.

Customers come from industries such as agriculture, water treatment, mining, construction, automotive, food, pharmaceutical, lead smelters, plastic recyclers, galvanisers, manufacturing, home and garden, and chemical suppliers. The Spinoff asked several New Zealand businesses that might conceivably use DGL’s services if they were customers, what their views were of Henry’s comments and whether they were reconsidering their relationship. Most confirmed they weren’t customers and left it at that. But a spokesperson for Landcorp, a state-owned enterprise operating farms nationwide, said Henry’s comments have been “rightly, widely and robustly criticised”.

After more than two decades as a privately owned business, DGL went public in May 2021 with an initial public offer (IPO) to raise $100 million. But listing on the local and Australian stock exchanges hasn’t changed DGL’s strategy of chasing organic growth and strategic acquisitions.

According to the IPO prospectus, DGL’s foundational asset, Chempro, the chemical logistics site in Wellington that Henry bought in July 1999, was used to service customers needing safe and compliant chemical supply chain management. Over the next two years, it started providing warehousing and distribution for “marquee” customers Ixom and Shell. Eleven years later, it acquired an Aussie-listed company that specialised in recycling and treatment services. Further investment in transport and treatment capabilities marked the period up to 2017, and by 2018, it had acquired the Dangerous Goods Logistics business in Australia, changing its brand and name to DGL Group.

Since May 2021, the company has gone on a spending spree, investing just under half its capital raise on seven more acquisitions. Its half-year net profit was up 185% to $8.5m, and it expects to have earned $65m on sales of $345m for the year ended June 30. Commenting on the earnings upgrade, Henry said DGL’s performance continued to exceed expectations.

Described as DGL’s “sole shareholder”, and the company’s only New Zealand-based director on its all-Australian board, Henry earns $662,000 a year as chief executive. Post-capital raise, he retained his majority parcel of shares, which he calculated was worth $700m at the time NBR spoke with him. Based on Wednesday’s share price, more than $140m has been wiped off his shares since his comments were published.

Previous media coverage has largely been positive, and often tied to DGL’s business development and acquisitions. Henry’s behaviour has come under scrutiny before, however, with NBR reporting the story of a woman who experienced harassment by him – an accusation he said was unjustified – around the time of DGL’s IPO. Other stories have noted Henry’s original surname is Whimp, and that he’s the brother of Bernard Whimp, a Christchurch businessman whose practice of making lowball share offers to investors in listed companies has attracted the attention of regulators in the past.

A 2021 profile for NBR’s List, a ranking of New Zealand’s wealthiest businesspeople, reported that Henry grew up in the Canterbury town of Rangiora. A former honey exporter, he became interested in property after the 1987 sharemarket crash and after buying commercial properties in Christchurch and Wellington, he moved north to Tāmaki Makaurau where he snapped up more properties, plus Chempro. Henry reportedly enjoys playing tennis in Parnell, the Auckland suburb in which he lives, and is a substantial donor to Hōhepa Canterbury, a trust supporting adults with intellectual disabilities. Henry prides himself on keeping his life “extremely simple”, saying: “I don’t have any complexities, I’m just free to work and think and have fun.”