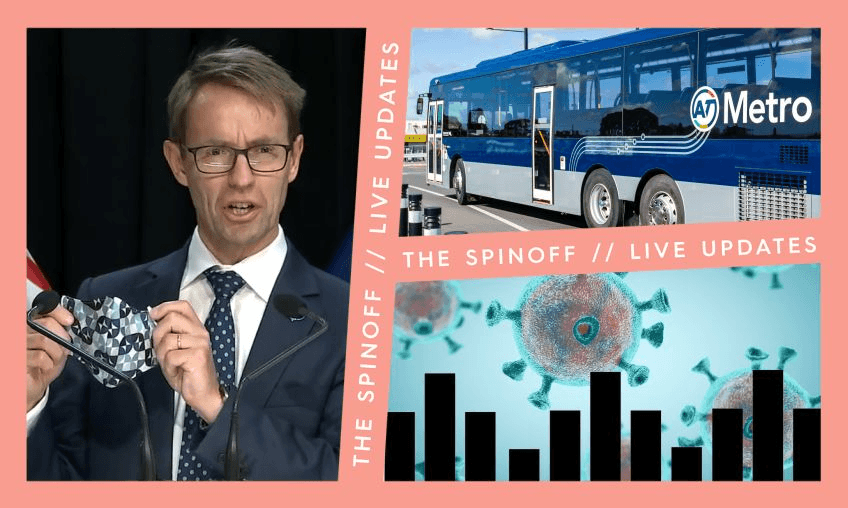 Live updates, August 23: Three new cases of Covid-19 in NZ, but only one is local

Welcome to The Spinoff’s live updates for August 23, bringing you the latest on New Zealand news and Covid-19 as it returns to the community. Auckland is now in alert level three and the rest of NZ is in level two. More details here. Official information here.

There was only one new case of Covid-19 reported in the community, along with two at the border.

A Stickybeak poll for The Spinoff revealed that support for the government response to Covid-19 remained high, though there were few that felt the same way about the National Party.

Shane Reti defended the National Party call for a new border agency to be established in the first 100 days of a new government.

There were changes announced on restrictions to Auckland travel.

The Kingswood Rest Home in Morrinsville was officially cleared of any possible cases of Covid-19.

As of this morning, there are “major changes to Auckland travel restrictions” have been introduced, the Ministry of Health has announced. People who travel via Auckland “without stopping” for work purposes no longer need to apply for an exemption, but must show “evidence of the purpose of their travel and their departure point and destination”.

The full list of “class exemptions” has been updated on the official Covid website. They include returning to your primary home, attending a medical appointment, or in need of emergency medical care, and maintaining a shared childcare arrangement. In all cases documentation should be carried. There are a number of exemptions for travel for work reasons, too, again on the official site.

The generic exemptions are being pushed to curb the number of extraneous applications for exemptions, with authorities currently facing a big backlog in processing. More than 10,300 applications have been received by the ministry, with around 1,500 applications approved and 400 declined.

Encouraging news comes from the Ministry of Health in its media statement. There is just one new case of Covid-19 that has been detected in the New Zealand community, and two in managed isolation.

One case has been linked to the cluster in Auckland as a household contact of a previously reported case.

The other two cases are imported. One is a woman in her 20s who arrived in New Zealand on August 16 from Croatia via Switzerland and Hong Kong. She has been staying at the Sudima in Rotorua and has now to Jet Park after testing positive on about day three. The other is a person in their 30s who has been staying at the Grand Millennium in Auckland and tested positive on about day 12.

The total number of active cases in New Zealand is now 114, with 18 of those imported cases. There are 151 people linked to the cluster who have been moved into the Auckland quarantine facility. This includes 82 people who have tested positive for Covid-19 and their household contacts.

The total number of confirmed NZ cases of Covid-19 now stands as 1,324.

There are nine people with Covid-19 in hospital. Two are in Auckland City Hospital, four in Middlemore, two people in North Shore Hospital and one in Waikato Hospital. Of those, three people are in ICU at Middlemore.

Yesterday laboratories processed 7,005 tests for COVID-19, bringing the total number of tests completed to date to 692,481.

The statement also confirmed that the Kingswood Rest Home in Morrinsville has now officially been cleared of any possible cases of Covid-19. “We sincerely thank the rest home staff, residents, and their families for their assistance in taking the appropriate precautions to ensure the safety of everyone.”

10.50am: When will Auckland come out of lockdown?

Auckland continues to face a “sprawling cluster”, he told TVNZ, and “while we are still seeing cases sort of pop up, and have that little bit of uncertainty about things, then a longer lockdown is probably on the cards.”

Cabinet meets tomorrow, and Jacinda Ardern will then announce any change to timings or alert level requirements.

Shane Reti has defended the proposal to introduce a border protection agency in the first 100 days of a National government. “We just need to make a start,” he told Q+A in an interview in which he continued to adopt a tone of measured calmness. There was an urgency, said the opposition health spokesperson, because there was a convoluted matrix of responsibility and accountability in managing the system. A new agency would establish a “clear line of reporting” with one minister in charge, he said.

Among the critics of National’s plan is Siouxsie Wiles, who considers it among a range of other possible measures in a new piece published this morning.

7.00am: New Stickybeak/Spinoff poll ahead of decision on alert level

At this stage there is no scheduled briefing on Covid-19 numbers today. That may change, but for now we expect the details to arrive in a press release. We’ll be refreshing the inbox furiously at 1pm and plonk the details here as soon as they land.

Those numbers will be critical in the decision making for Jacinda Ardern and her cabinet ahead of tomorrow’s decision on when Auckland might move from alert level three and the rest of New Zealand from alert level two. As it stands, the current statuses are set to end when the clock strikes midnight Wednesday.

Stickybeak has been running a poll for The Spinoff over the last week on, among other things, the level of support for the government response, the view of the National Party approach, the timing of the alert level changes and the backing for the elimination strategy. All of the details are here. (We’ll have more from the polling, including on misinformation and masks, in the next few days.)

The elimination strategy, sadly, was successful for the Wellington Phoenix in the A League last night. They outplayed Perth in most respects apart from scoring goals.

A video posted on the Labour Party’s Facebook page yesterday was removed last night following an objection by Act leader David Seymour over the depiction of Ashley Bloomfield, the director general of health and a public servant.

A spokesperson for the prime minister told Stuff that they believed the video, which Seymour branded “completely unacceptable”, was legitimate given there was no Labour Party branding. “But we are taking it down to re-edit, so as to remove any concern over public servants being shown.’’

There were six new cases of Covid-19, all in the community. Four were connected to the existing cluster, with two under investigation.

Nine people are in hospital with Covid-19, including three requiring intensive care.

Seventy NZ Post workers went into self-isolation after two of their colleagues tested positive for Covid-19.

A week since the policy was introduced, 40 people wishing to return home have been exempted from managed isolation fees.

The director general of the World Health Organisation issued a warning to countries experiencing fresh outbreaks of Covid-19 after long periods with no cases.

Read all the key stories in yesterday’s live updates.