The seventh in a series of polls by Stickybeak for The Spinoff reveals how support for government measures have changed – and views on the National response.

Twelve days ago New Zealand’s post-Covid honeymoon came to a sudden halt. The detection of Covid-19 in several members of an Auckland family, and cases in a number of workplaces, schools and churches across the city shattered any illusion that the country might be invulnerable to the coronavirus that has ravaged populations around the world.

As the outbreak – for which the index case, presumed imported, remains unknown – grew, so did scrutiny of testing at the border and in managed isolation and quarantine facilities. The prime minister, minister of health and the director general of health faced a torrent of questions about the fact that the promised levels of testing at the border had not come close to being met.

Support for the Covid response

How badly have the outbreak and the testing shortcomings – artfully described by Ashley Bloomfield as a “dissonance” – hurt support for the government’s response to the public health crisis? The short answer: hardly at all.

The seventh and latest poll by Stickybeak for The Spinoff, which began surveying last Sunday August 16 and ran until Friday August 21, reveals that 75% are positive about the government’s response to Covid-19 – the same figure as the last poll, conducted in mid-June.

That June poll, however, recorded a nine-point drop in positive response from the month before. It followed revelations that two women, just a few days after arriving from the UK, had been allowed to exit managed isolation and drive from Auckland to Wellington under a compassionate exemption – without being tested – only to later test positive for Covid-19.

We can now track the changes in the perception of the Covid response across seven Stickbeak/Spinoff polls spanning five months.

Jacinda Ardern, launching the Labour Party’s campaign a fortnight ago, called in the “Covid election”. That election has since been kicked forward by four weeks to October 17, but we remain very much in election mode. As such there will be relief for Labour that, while the number with a negative view of the response is the highest to date – 15% – it remains that three in four people continue to support for the government approach. 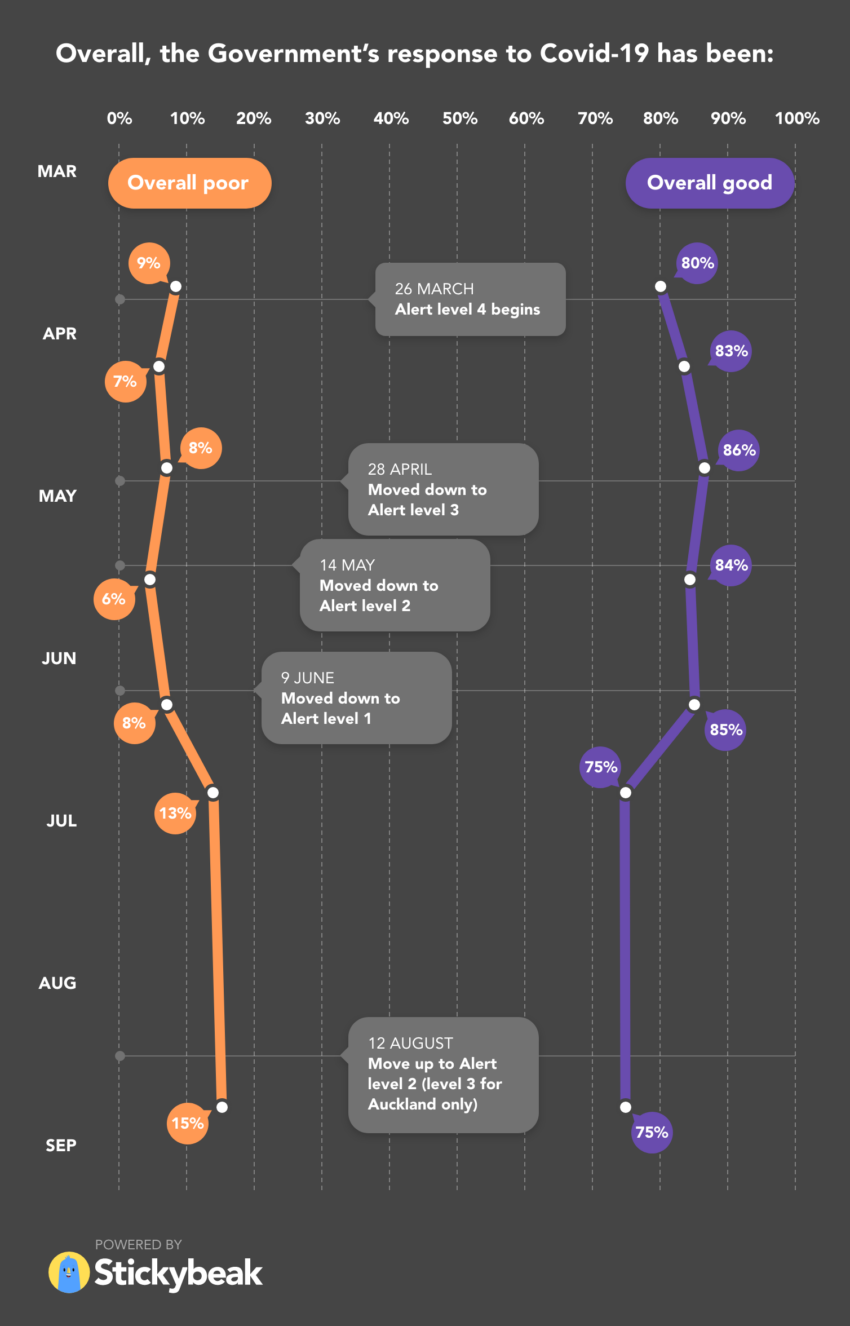 With regional lockdowns deployed for the first time, as part of the government “resurgence plan”, Auckland is currently in alert level three and the rest of the country in level two. Here’s how the views on the government response break down according to the respondent’s location.

The lead party of opposition has been through a torrid few months, with Judith Collins the third leader, after Simon Bridges and Todd Muller, to seek to mount an effectively balanced criticism of the government approach to the crisis.

National’s critique of the government became entangled immediately following the fresh outbreak in strange conspiratorial intonations from the deputy leader, Gerry Brownlee. Recent days have seen a steadier approach, with health spokesperson Shane Reti – or Doctor Shane, as Collins is keen to present him – at the forefront. But that, and National’s release last week of its border security policy, is yet to win the public over, with 64% disapproving of the National response to Covid-19.

In keeping with previous polls, there is strong support for decisions on when to move between alert levels. With Jacinda Ardern set to announce today timing on shifting out of the current alert level three for Auckland and level two for the rest of New Zealand, she will be buoyed to see 77% supported the latest alert level changes.

The isolation and quarantine system

Perhaps the most surprising result in this latest poll is the level of confidence in MIQ – the managed isolation and quarantine system.

When we asked about this two months ago, it was following repeated reports of abscondment and, most critically, the case of the two women who drove to Wellington, Covid-positive, without being tested. Then, 40% of respondents lacked confidence in the system. Today, with Megan Woods and Digby Webb taking ministerial and operational responsibility for overseeing the system, the number lacking confidence has dropped to 24%.

Celebrations about what was thought to have been 100 days without Covid in the New Zealand community were shortlived as the virus re-emerged and a third of the population returned to lockdown. That left some questioning the viability of the government’s “elimination strategy”. Of those that took a view on the strategy, 78% supported it and 22% opposed. Almost one in five, however, were unsure.

A total of n=601 sample was achieved of adults in New Zealand, with 217 of those in Auckland.

The study went into the field on Sunday August 16 and was completed on Friday August 21.

Auckland has sold out of doughnuts