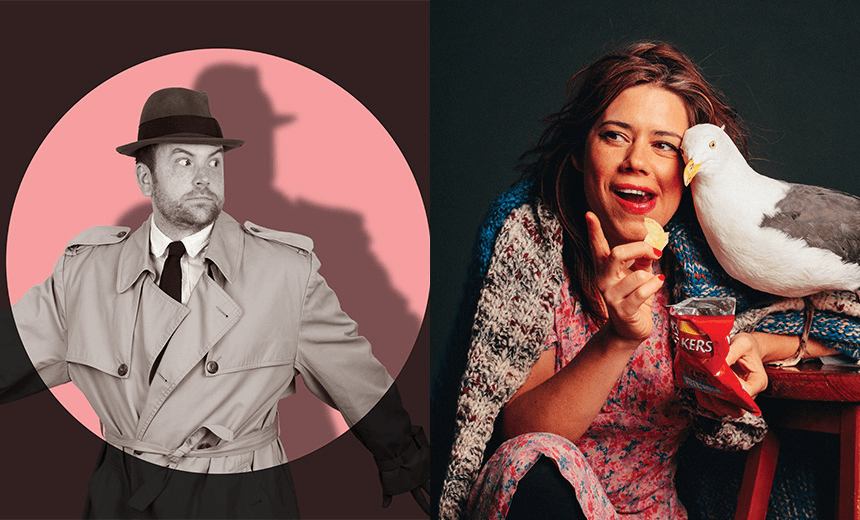 Sam Brooks hits the Comedy Fest halfway point with a lovely story from Nic Sampson, a beautiful shambles from Brit Lou Sanders, and James Roque mixing theatre and stand-up while maybe getting his dick out.

Nic Sampson’s show last year, Nic Sampson Has Fallen Down A Well, was one of the best shows I’ve seen by a local comedian. It lured you into thinking you were seeing your average joke-filled observation-heavy hour of comedy and shocked you with something much weirder, much more high concept and much funnier.

This year, Sampson goes straight in for the high concept and it’s a genuine delight: He’s just going to tell us a lovely, funny, increasingly wacky story. Sampson is the rare comedian that can do this, not only because he’s magnetic and endlessly watchable as a performer, but because his writing is sharp enough to keep us hooked in.

The titular jewel heist story is filled with enough jokes and bizarre moments, his Norwegian accent is maybe the funniest out-of-nowhere joke I’ve heard this festival, that it keeps the audience hooked in. It can be difficult for people to sit while one person tells them the story, there are few performers that an audience would actually listen to read the proverbial phone book, and luckily for Sampson his story is strong enough that it lets him riff as a performer.

Much like Guy Montgomery, Nic Sampson cleverly riffs on subverting our expectations. As with last year, when he gave us a stand-up show with a high concept snuck in, this year he gives us a lovely story that is stuffed full with more jokes than a kid stuffs his toy box full of stuffed animals. More than anything Jewel Heist continues the trend of Nic Sampson putting on bloody good shows, which is a very good trend indeed.

You can book tickets to Nic Sampson: Jewel Heist here.

Oh my lord what a beautifully confident shambles of a show.

I’ve seen enough comedy at this point in my life to recognise the bad kind of shambles. It’s when someone is genuinely freaked out by their audience, doesn’t know their material, and is visibly grasping at straws just so they get through their hour without screaming into the metaphorical abyss. It’s painful to watch, and sometimes you just want to stand up and hug the comedian.

And then there’s Lou Sanders, who creates the idea of a shambles without actually going full shambles. It’s a risky energy to tap into, because it keeps the audience engaged throughout. We want to see a show go off the rails kind of, it’s like watching the car crash, but we don’t want the actual trauma of it.

Sanders is funny enough to keep us engaged, and there’s appealing edges to her personality, a little dark bit here, a little musical cue here, and a little darkness here. The entire thing is a little bit of a best of show, but there’s a structure here and a killer ending that makes the show truly special and weird.

There’s a shambles and then there’s being guided by a shambles by someone who knows exactly what she’s doing to the audience, and how she’s making them feel at every point. The difference is crucial, and huge.

James Roque Wants To Show You Something

Maybe my favourite trend in this year’s comedy festival is seeing local comedians push the form, and themselves within that form, into riskier places. Nowhere is this more evident than James Roque’s show, a pretty much dead-down-the-centre-fifty-fifty split of comedy and theatre.

Then there’s the theatre part of the show, where a performer playing his therapist gets up onstage and helps him through it, in a loose and openly fictional retelling of his actual therapy. The comedy show becomes a framing for his therapy, and the show goes somewhere darker and more introspective.

It’s fascinating (at least to me, who has to write these things and has to come up on interesting and readable takes on them) to dissect this particular show. The theatre part of it, which focuses on small scenes between Roque and his therapist, functions like excerpts from a larger play. In the context of stand-up, it’s pretty risky stuff to give an audience; people who came expecting some jokes and expecting to sit there and laugh, and not expect to join dots and link things together.

The execution is a little messy, by the end of the show, it’s clear what Roque has gotten from his therapy but it’s not clear what the audience is supposed to get out of this show being framed like this. When the show closes with stand-up, it seems like a wiping of the slate rather than a dovetailing of the two styles he’s been tackling.

It feels like the first step in Roque going somewhere new with his stand-up; it’s messy and a bit shambolic, and it doesn’t quite land the ending, but it’s a damn special experience to watch an artist try out the new toys in the sandbox and mash them together to make something new.

James Roque’s show is sold out!