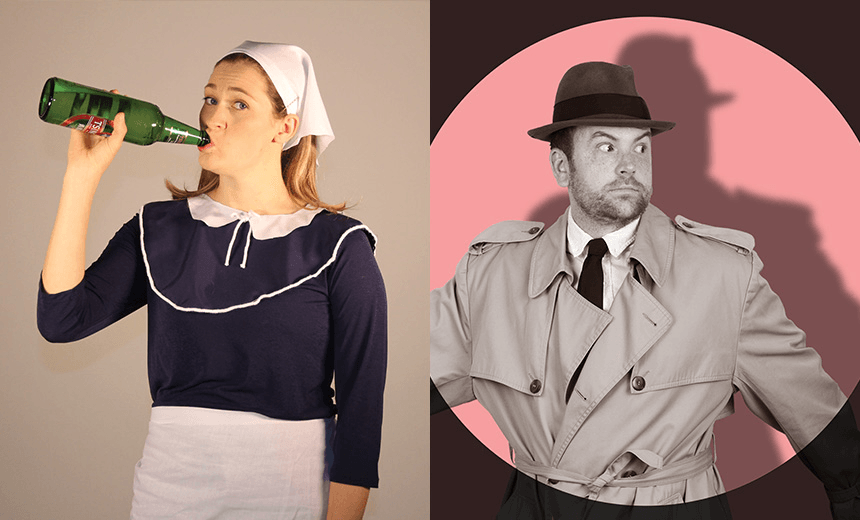 Comedy co-editor Natasha Hoyland ended up in hospital as the opening nights of NZ International Comedy Festival’s second week were kicking off. So she asked the comedians to review their own shows in her absence.

Hello, Natasha here! Coming to you live from my death bed. This time of the week I usually do my weekly festival diary about my favourite things I’ve seen so far in the festival. Unfortunately, instead of seeing shows on Tuesday, I was lying in a hospital bed being drip fed all night.

Turns out I had a bad stomach bug that my body wasn’t coping well with, though I’m feeling a lot better now. I’m still not well enough to go out and see shows however, so tomorrow my regular festival diary will be taken over by Chelsea McEwan Millar, host of our Laugh-Off podcast, and I know she’s got plenty of exciting things to tell you all about.

As for the shows I missed out on, I asked some comedians to review their own opening nights in my absence.

Guy Montgomery: Let’s All Get In A Room Together, Tuesday 9th May, 7pm, Basement Theatre, Auckland

The opening night of my smash hit show Let’s All Get in a Room Together could not have gone worse. There was an 11 year old boy in the front row with either a parent or guardian who kept heckling me, saying that he would trash me on the rugby field and his dad could beat up my dad. Usually I can handle hecklers but this kid was vicious, he had a mean tongue and a meaner stare. I tried to ignore him, to not take the bait, but as I shifted from opening patter into my first joke he kept jawing at me. He said that my performance technique was ‘tired’ and no-one respects me on the playground. I got through 15 minutes of material before he removed a rugby ball from behind his back, walked onto the stage and placed it at my feet before yelling out the word TRY. I wasn’t gonna take that so I took the ball and booted it out of the theatre into the foyer. He chased the ball and I returned to the microphone. By the time I started up again I realised the entire room had chased the ball and I was left alone in a room with 45 minutes of my show remaining. Fingers crossed tonight goes better.

Opening night was good, apart from the fact there was a big gaping empty chair in the front row with a sign saying ‘Reserved for Natasha Hoyland’. It put me off my performance if I’m honest, especially the parts when I would hand over to ‘my good friend Natasha’ to finish the punchline of a joke and be greeted with nothing but silence. By the end of the night the boos and jeers of the hostile crowd were more than I could stand and I broke down sobbing in front of a room full of industry professionals. If only Natasha Hoyland had been there. If only.

I flew into Wellington and performed a couple of hours after I landed. The most important people I wanted to impress were my boyfriend’s four straight flatmates who I’ll be living with this whole week. (Yes my boyfriend lives in Wellington, and thank you for your concern – long distance is great! *rips label off drink bottle*). It would have been dark times for the rest of the week if they hated the show, but luckily they came backstage afterwards and said “we loved it!” and then I said “Do you guys want to stay for a beer?” and then they said, “Nah, we’re going home to play Tony Hawk”.

Jokes B4 Blokes opening night was good but there was obviously some tension in the room. It’s quite evident that flatmates (and ex friends) Lana and James only speak to one another while on stage after the harrowing process of making this show. Jk, it was chill.