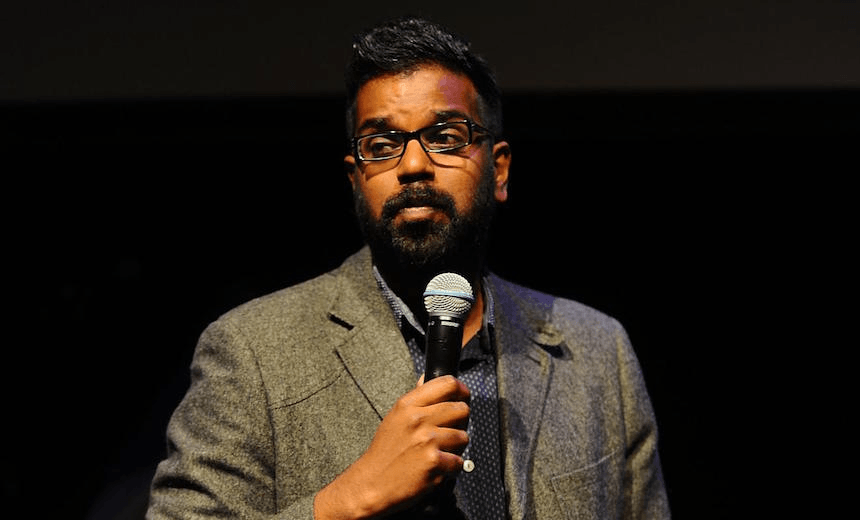 Boy, oh, boy, last night was incredible! I think, in fact, that it was probably the best comedy gala I’ve ever been to. Although it was three hours long, the programmers balanced the acts really well and it didn’t feel like it was that long at all. When Urzila Carlson introduced the last act, I was surprised and sad that it was already coming to an end. Here are a few of my favourite acts of the night, and some of their stand-up clips, so even if you missed the gala, you can get an idea of what to expect when it screens on TV3 in the weeks to come.

Romesh Ranganathan was the overall stand out for me last night. Out of all the acts, he was the most memorable – and that’s not to disrespect the other acts, but it IS a three hour long show. It’s a lot to process. He jokes about being a father and about how stupid it is when people use the phrase ‘no homo’. I think most of the audience, including me, immediately booked tickets to his own show following his performance. He’s selling out so fast he’s added an extra date! Get amongst!

Frickin Dangerous Bro, consisting of Jamaine Ross, James Roque, and Pax Assadi, were a crowd favourite with a sketch about a teacher underestimating the intelligence of his students when planning a field trip. The students end up schooling him about Shakespeare, museums and the Batman franchise. The sketch is so funny they can hardly get through it without breaking into laughter – and that’s the best part! I love it when comedians and actors on stage can barely hold it together, it’s one of my favourite aspects of performance. Below is a similar sketch in the same series.

Joel Creasey has a fantastic stage presence, impeccable style, and delivers a constant stream of hot one liners and life anecdotes. He talks about coming out to his parents to an underwhelming reaction, his dating life, and with all that in the very short five minutes, he quickly became one of my new favourite comedians. You’ll be laughing almost constantly at Joel’s show.

No one deserved a spot in the gala more than The Fan Brigade. The pair met on Twitter a few years ago and got together to write a song about Tamati Coffey that almost instantly made them a favourite in the NZ comedy world. Performing a song about how cricket sucks, they received mixed reactions ranging from hallelujahs from the people that agreed to soft little cries from butthurt cricket nerds. Cricket haters rejoice! I did an amazing interview with them backstage before the show last night, so keep your eye out for that over the next few weeks because it’s a goodie!

Urzila Carlson really stunned as the host of the evening – not to mention, she looked incredible. Carlson seems to nail every single gig she does. Name one bad gig she’s done… yup, see, nothing. None. She’s really quick to take on moments she observes mid-set, making jokes the set movers behind her and how that she’s “never had men behind me, that’s never happened to me in my entire life”. My co-editor Sam Brooks messaged me this morning saying “I was so impressed with Urzila last night. It made me realise, fuck, this comedian is a woman, she’s a foreigner, she’s gay, and she’s one of the biggest comedians in the country and she’s KILLING it”

That’s something I think all of us can collectively agree on and celebrate.

Click on each of the comedians names to buy tickets to their individual shows in the NZ International Comedy Festival, proudly sponsored by Flick, or click here to view the full line up.

(Disclaimer: Natasha is the producer of Frickin Dangerous Bro’s show in the festival)