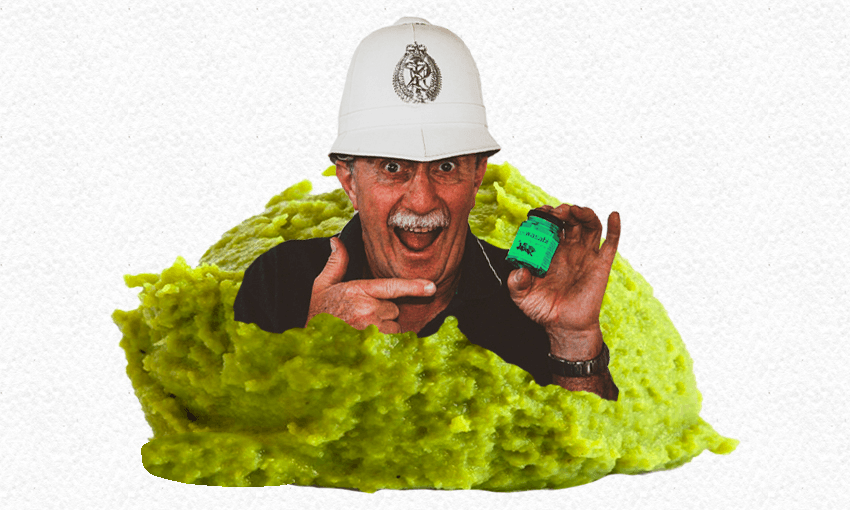 By Olivia Sisson
Guest writer
Made possible by

It’s notoriously difficult to produce, which is why the vast majority of this pungent condiment isn’t the real deal. So how has a former police officer made a business out of farming wasabi in Lincoln? Olivia Sisson pays a visit.

Even if you think you love wasabi’s signature burn, there’s a high chance you’ve never actually had it. The vast majority of wasabi served with sushi around the world isn’t real – even in its home country, it’s estimated only 5% of the stuff is real, and it’s likely to be less than that outside of Japan.

Real wasabi comes from the rhizome (stem) of Wasabia japonica, a leafy green plant from the same family as broccoli and cabbage. Often called “Japanese horseradish” or “wasabi paste”, the pretenders are usually just a blend of horseradish, mustard, green food colouring and preservatives.

The real thing fetches a high price, up to $400 per kilogram in some cases, because of both its flavour and its demanding personality. Wasabi is considered to be the world’s most difficult crop to grow commercially.

In 2019 I found out why, when I spent a rainy afternoon at Daio, a 121-year-old wasabi plantation in Japan’s Nagano prefecture. At the base of the alps, in near perfect conditions, Daio produces 150 tons of the stuff every year.

At Daio, wasabi is grown in flooded shingle beds alongside the pristine Sai River. Every day, 120,000 cubic tons of water are diverted from the river to nourish the plants. That’s equivalent to 230,000 people’s daily use, according to Daio’s own website.

On top of wasabi’s preference for incredibly clean and constantly moving water, it requires specific temperature and humidity too. And while it grows best in waterways, wasabi also needs almost complete shade. Shade cloths are usually draped over the beds.

This trip got me thinking – could we not grow this exacting crop in New Zealand? Down south at least, we’ve got a solid supply of glacial runoff, a similar climate, and plenty of space to work with. While almost everyone who has attempted the venture outside of Japan has failed, Google informed me that one Kiwi company, Coppersfolly, had not.

Located in Lincoln, outside of Christchurch, Coppersfolly grows and sells fresh wasabi alongside a product called purewasabi, which is made with real wasabi with a dash of grapeseed oil, lemon juice, citric acid and salt. Recently, I came across it at Frances Nation Grocer, a retailer of New Zealand-made foodstuffs in Christchurch. I bought some and can confirm it’s delicious, elevating everything from sashimi to ham sammies.

Fenton Wood is the man behind this New Zealand wasabi venture, and I was curious to know how he cracked it. After a few emails and a phone chat, he invited me for a coffee. The wasabi farm and Wood’s home, as it turns out, are the same place.

Before switching his focus to this curious condiment, Wood spent 33 years in the New Zealand Police. When he retired from policing, Wood came out to Lincoln to build his house, which sits on a very flat, very sunny swathe of the Canterbury plains – pretty different to Daio. This land, however, is why he got into wasabi in the first place.

‘‘I knew we were never going to make enough money if we put sheep on this plot,” Wood said. “Other people had tried emus and hazelnuts; I wanted to get on the ground with something new.”

On paper, wasabi farming looks like a great idea. “Sometimes people run the numbers and think, ‘wow, I could be a millionaire in no time at all’,” Wood laughed. Five wasabi plants can go in per square metre, and 1-2 kilograms of rhizome can be harvested from each. “Of course if the plant dies,” he said with a smile, “you won’t get any.”

I asked Wood what the average startup cost is for a single hectare of wasabi – I’d read it can be up to $700,000. With so many variables, he felt it was difficult to estimate. “Unless you have a nice riverbed – then it’ll cost you a lot less.”

Coppersfolly’s first crop took two years to mature, as expected, but it sold for just $5 a kilo. Wood wasn’t sure what to do with the stuff, but positive feedback from caterer Ruth Pretty and various chefs kept him going in those early days. At the same time, he started experimenting with wasabi pastes.

In 2003, Wood finished tweaking purewasabi, a product that delivers real wasabi but is also suitable for home chefs, grocery stores and the export market. Unlike the fresh rhizome, it doesn’t need to be used up straight away. The week I went to see Wood, he’d shipped some off to Bulgaria, France, and Spain on top of his regular New Zealand clients. He now produces 20kg of purewasabi a fortnight, in addition to the fresh rhizome he sells domestically, and can hardly keep up with demand.

After about an hour and a half of wasabi chat, Wood prepared us some to try, using the traditional tool for the job – a sharkskin grater. Wasabi’s pungency comes courtesy of isothiocyanates, a specific molecule found in cruciferous plants. These molecules must be disturbed or crushed in order to release their flavour. “Never lend one of these to a chef,” Fenton cautioned of the grater. “Chances are it won’t return – lost accidentally, of course.”

After we’d sampled the product, Wood showed me the growing operation itself. He starts with sterile plant tissue to ensure no disease is present. Once these sterile seedlings are big enough, he transplants them into individual cells, waters them by hand for six months, and finally moves them into the flooded shingle beds that are covered by a shade house.

Once in the beds, the plants become vulnerable. Aphids, slugs, snails, peacocks, pūkeko, sheep and cattle are all delighted to feast on the plants if given the chance. Weeds grow rampant. Watercress feels most welcome, and while some love to forage for it, Wood doesn’t want to see it here. On one occasion, he found an eel swimming among the wasabi plants and had to encourage it to leave with a rake.

If and when the plants make it to their second birthday, they’re ready to be harvested. From there, Wood ships fresh wasabi to chefs and restaurants all over Aotearoa. At Cocoro in Auckland, one of Wood’s oldest clients, you can grate it yourself. The rest of the crop is processed into purewasabi and sent out across the world – Wood has his daughter help with this bit.

In addition to via Coppersfolly’s website, you can buy purewasabi at Frances Nation Grocer in Christchurch and at Moore Wilson’s in Wellington, and you can find the fresh rhizome on various menus at the likes of Hello Beasty and Masu in Auckland, and Super and Otahuna Lodge in Canterbury.

If you’re keen to really venture down the rabbit hole, you could try to grow it yourself. Wood will sell and ship you some small plants, but only after he gives them their last rites. As he put it, you’d be better off buying some fresh rhizome, which is cheap at twice the price.