Last week, Auckland’s much-loved hole-in-the-wall Korean pancake store closed its doors for the last time. But even after 20 years in the business, its owners aren’t ready to call it quits just yet.

If there was ever a doubt about No. 1 Pancake’s popularity, the hour-long queue on its final day was certainly proving a point. Shortly after the downtown hole-in-the-wall opened its doors on Friday afternoon, hundreds of orders had already started pouring in. And in the kitchen, standing elbow-to-elbow in a space no bigger than a bathroom stall, a team of five scrambled to work as quickly as they could, filling, folding, flattening and frying one pancake after another.

It’s tough, repetitive, laborious work, but for owners SK Lim and Abigail Park, it’s been their livelihood for more than 20 years. While No.1 Pancake was first started by a family friend in 2004, Lim and Park took over the business six years later. Since then, the store has developed a cult following, popularising hotteok 호떡 – a common street food in South Korea – among Auckland’s masses.

While the traditional filling is cinnamon and sugar, which produces a crispy outside and caramelised inside, No.1 Pancake has expanded its offering over the years to huge success: a chocolate hotteok with a sweet gooey centre, a chicken and cheese hotteok for a savoury twist, and a ham and pineapple hotteok not unlike a Hawaiian pizza. Its most successful version, however, has been the potato and cheese, which was voted one of Auckland’s iconic top 100 eats. But now, with the couple approaching their 60s, they’ve decided it’s time to take a step back, making the difficult decision to close down the Lorne Street store at the end of July and move to a scaled-down operation on the North Shore instead.

“We’ve always been a small family business, and they did it to make ends meet. But somehow, through a lot of luck and support from the community, it’s grown into something bigger than they ever imagined,” says David Lim who, along with his brother, Jonathan, has helped work on the business with his parents behind the scenes.

“But it’s a really physical process for them, and they put a lot of their time and energy into it. My mum, for example, can’t even make a fist with her hands in the morning because after all these years she’s used her hands so much … [Also in 2018], my dad almost had a heart attack, so these health scares made them realise there was only so much they could do.”

However, Lim says the transition has been bittersweet. No.1 Pancake has become a cult favourite over the years with a crowd of loyal customers, many of whom had written heartwarming messages (“Always loved your pancakes, helped me get through uni on the cold days!”) for the store’s photo wall on its last day. In return, the store pledged to donate all proceeds from the day to Auckland City Mission as a gesture of gratitude for the community’s support.

“I know there are some customers who used to come here when they were in uni and high school, and now they come along with their own kids,” says Lim. “So to see that whole transformation and to see people still remember [my parents] and are buying pancakes from them all these years later… I mean, what can you say about that?” 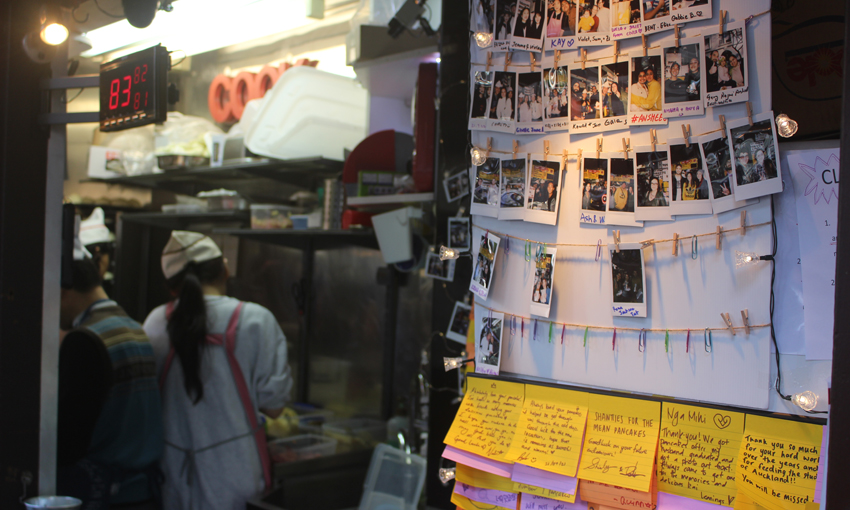 The family moved to New Zealand in 1994 – first to Christchurch and then to Auckland in the early 2000s – and Lim recalls his parents (who’d previously studied law and worked as a nurse in South Korea) having various jobs over the years, from radio broadcasting to working with international students. After moving back to South Korea for a short period of time, Lim says the family eventually returned to New Zealand after a business venture his dad had pursued didn’t work out.

“From that period to about 2010, it was a really financially unstable and difficult time for my family. My mum was receiving food donations from neighbours and friends because sometimes there just wasn’t enough to buy groceries,” says Lim. “So it was out of a period of real struggle and realising they were approaching middle age that they were asking themselves ‘what do we do? How do we make money?’”

By coincidence, No.1 Pancake came along when a friend in their church community was moving to Australia and was looking for someone to take over their hotteok business. Lim remembers how the early years were a steep learning curve for his parents who were working six days a week, often for 12 hours a day, prepping ingredients and making batch after batch of dough.

“I remember when they first started my mum was so overwhelmed by the amount of work that went into preparing the ingredients. Once she was hunched over a huge container of chicken thighs that she had to shred for the pancakes and was literally sobbing as she was preparing them.

“So there was a lot of trial and error, and it took a long time for them to actually find their beat and get into the rhythm of things,” he says. “But they’re just one example of many examples out there of immigrants coming here [and having to adapt]. They had to come here and start from scratch.” 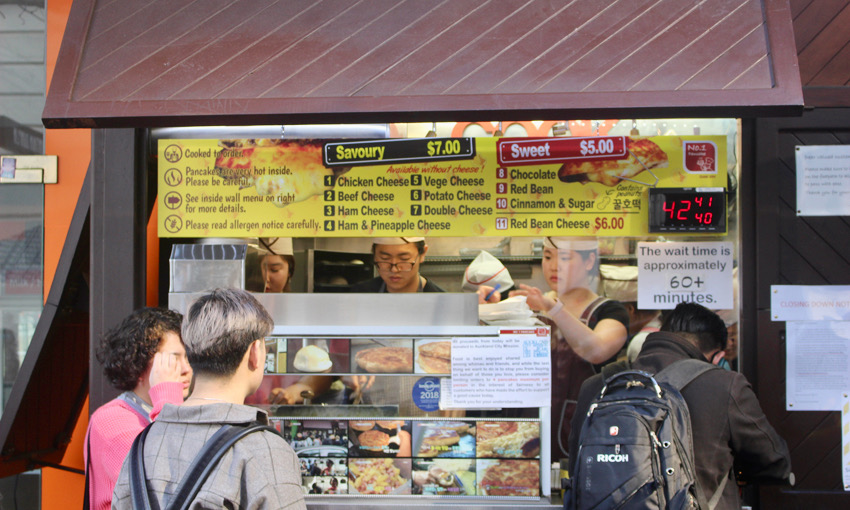 Nowadays, No.1 Pancake is a smooth and efficient operation. But on closing day, orders were flying in faster than its tiny, narrow kitchen could handle. When I joined the queue at 1.50pm, there were signs warning customers of a wait time of anywhere between 10 minutes to more than an hour after ordering. When I finally reached the front of the queue at 2.50pm, a staff member outside asked for my phone number, noting “it could take a while” and that he’d text me when my order was ready. After heading off to the library across the street to work and watch Olympic gymnastics, I finally received a text message: “Your order will be ready in 15 minutes!”. It had just struck 6pm.

It’s bizarre to think that people would wait four hours for some fried dough, especially when the business is only moving – not closing forever. With that said, people wait hours for food all the time, and many reckon the reward is more than worth it. Mob psychology probably has something to do with it as well: one girl I talked to in line said she’d never been to No.1 Pancake before but had seen people lining up all week and was curious to try. “I heard someone waited for two hours,” she said. I thought she was exaggerating: obviously not. 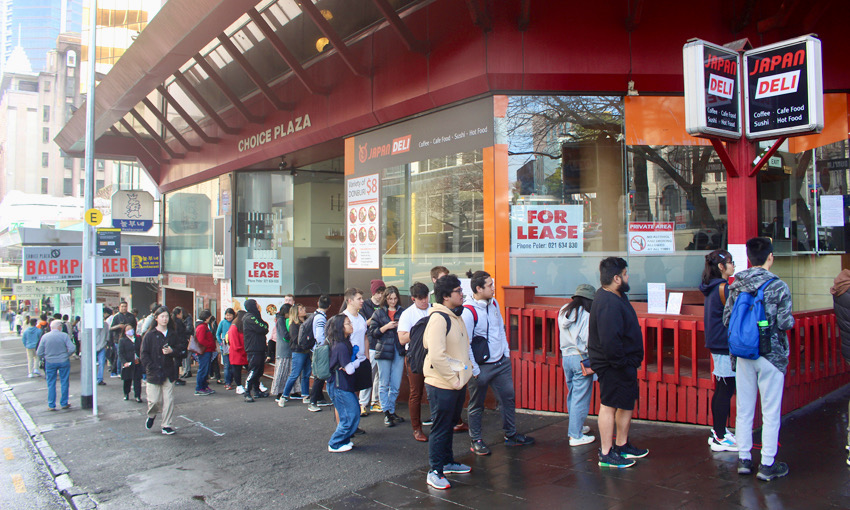 The queue for No. 1 Pancake snaking down Wellesley St East (Photo: Jihee Junn)

But the main reason, I suspect, is to do with No. 1 Pancake’s new location. Not everyone will be willing to make the trip up to Rosedale, where its new premises are set to open later this year. After all, most of its regular customers are based in the city – office workers on their lunch breaks, uni students killing time between lectures – who gravitate to No.1 Pancake not just for the food but for the convenience.

But Lim says Rosedale wasn’t just picked out of the blue – it’s where they currently have their main kitchen for preparing all the ingredients. Now, people will be able to order online and pick up locally, allowing the family to reduce some of their workload.

With that said, Lim adds they’re not looking to sit back and relax just yet. Instead of selling the pancakes themselves, he says they’re looking into the possibility of franchising the business, allowing others to set up shop in any location they like while the family preps the ingredients in their Rosedale kitchen.

“We’ll make the dough and the ingredients and then get people who can then make the pancakes and sell them. And behind the scenes, my parents have been trying to systematise things and make little tools for making the pancakes so that when new people come in it’s much easier for them to pick it up,” he says. “That way they can reach a wider range of customers. And because they’ll be making the ingredients they can still maintain the same quality.”

If the franchising proves successful, there’s no reason why a stall full of freshly made hotteok can’t make its way back to Auckland central and beyond. The next few weeks will see a lot of planning for the Lim family before officially reopening later this year. But after more than 20 years of relentless work, let’s hope they take a well-deserved break, too.