Alcoholic seltzers are all the rage this summer, but are any of them any good? The dedicated beverage enthusiasts of The Spinoff took it upon themselves to find out.

We saw the first glimpse of the hard seltzer craze in Aotearoa last summer, when an array of supposedly better-for-you fizzy alcoholic beverages that tasted of, well, not a hell of a lot, appeared on the shelves.

Here at The Spinoff we reviewed and ranked a bunch, lumping them under the catch-all descriptor “new-wave RTDs”. Most were based on vodka or gin, with only Native Hard Sparkling – which, funnily enough, topped our tasting – getting its booze content from fermented cane sugar in the American hard seltzer fashion, and none of the bevvies actually calling themselves a seltzer.

What a difference a year makes. These days you can’t brave a liquor store fridge or supermarket booze aisle without being assailed with aesthetically pleasing cans of fizzy piss water. Note that mention of supermarket booze aisle. Unlike the drinks tasted last year, many of these new New Zealand seltzers are based on beer, wine or cider, neatly circumventing the liquor-store-only restrictions that spirit-based RTDs are bound by. Instead of traipsing to a liquor store for a 10 pack, you can pick up a few seltzers – or even just a single can – when you’re doing the grocery shopping.

If you’ve got this far and are wondering what the hell I’m talking about, here’s a precis: seltzer is basically what Americans call soda water. A couple of years ago someone over there decided to make boozy, lightly flavoured soda water and put it in cans, and people went nuts for it, particularly the White Claw brand – so much so that summer 2019 in the US was dubbed White Claw summer. There were memes. There was a shortage. Ah, pre-Covid life.

Anyway, as New Zealand is now experiencing its very own seltzer summer, The Spinoff decided to review and rank as many as we could find. That ended up being 36 different flavours, from 10 or so brands (we did it over three sessions on three consecutive days). It’s not all the seltzers available in New Zealand, but damn near. 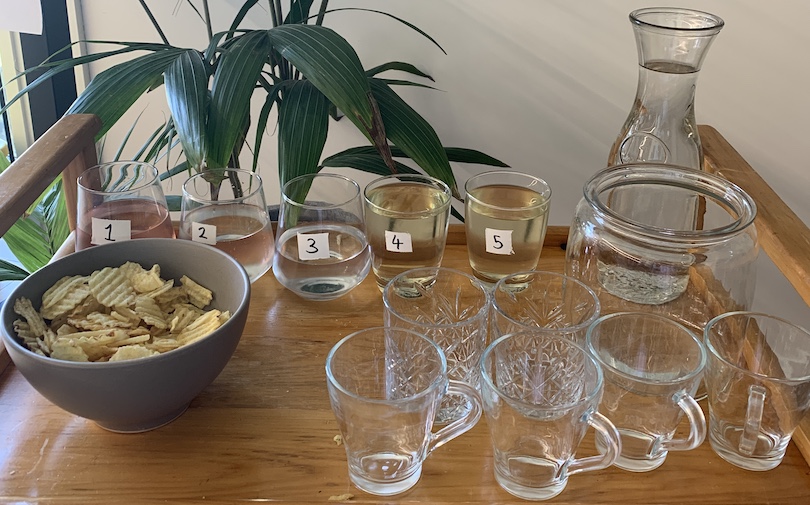 Every seltzer was tasted blind by a rotating panel of between five and nine Spinoffers, from seasoned seltzer consumers to first-timers, with the tasting expertly conducted by office manager Lucy Reymer. Each taster gave each seltzer a mark out of 10, which were averaged out to calculate the final scores (sorry about the decimal points, we’re a precise bunch).

We’re listing the top 10 here with tasting notes, followed by some of the other acceptable-scoring seltzers. We’re not naming the brands we liked least, but have included some of our less flattering comments for your amusement.

If your fave isn’t in the top 10, sorry, but don’t take it to heart. Taste is, of course, subjective, and the thing about the hard seltzer – as I told a couple of tasters who asked me what attributes one should look out for in determining a good seltz from a shit one – is that it is not a complex beverage. As The Atlantic put it in 2019: “It’s cold, drinkable, and doesn’t taste like much. It neatly satisfies young consumers’ desires for affordable, convenient, portable, low-calorie, healthy-seeming alcohol options. In other words, it’s the perfect drink for people exhausted by rules.” Enjoy. 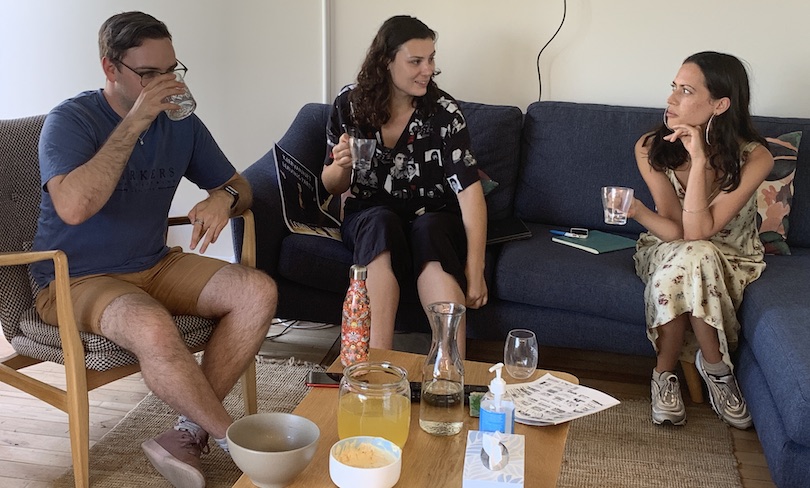 THE TOP 10, IN DESCENDING ORDER

Berg, which is owned by Lion and comes in three flavours, is made from a fermented sugar base in the classic hard seltzer fashion, but for some reason our tasters were convinced this blackberry number was wine-based. It was liked well enough, with Michael Andrew saying it tasted like someone put a lolly in a glass of Lindauer. Sam Brooks thought it smelled like bad chardonnay “but tastes better than it smells”. Mark Kelliher reckoned it would make a lovely first drink at a wedding before you move on to the serious stuff, and Charlotte Muru-Lanning praised the “nice smoothness” and the fact there was no bad aftertaste.

Wellington beer barons Garage Project have joined the seltzer craze with Dirty Water, which was released this week. We got our hands on some in advance of its public release but remember, we tasted it entirely blind, so promise we were not swayed by our love for GP. The consensus on this number, one of three flavours in the Dirty Water range, was that it smelled like summer. “A bit like sunblock,” reckoned Alice Webb-Liddall, while Charlotte opted for “like the beach” and Sherry Zhang went for “like a rich person’s bach”. As for taste, Alice Neville said “it’s not bad, it has a tang”, while Sherry found it “quite sour – piquant, you might say”. Josie Adams summed it up best with “it’s different, it’s unusual”.

Pure Piraña is a Heineken brand that launched its two flavours into New Zealand last September. We all thought this one smelled like Sprite, which is a good thing. As for the taste, Leonie Hayden reckoned “watered down Sprite”, while Toby Manhire got shandy vibes. Michael felt it would be a good beer pong beverage, while Leonie said “I would happily drink many litres of that until I regretted it”. 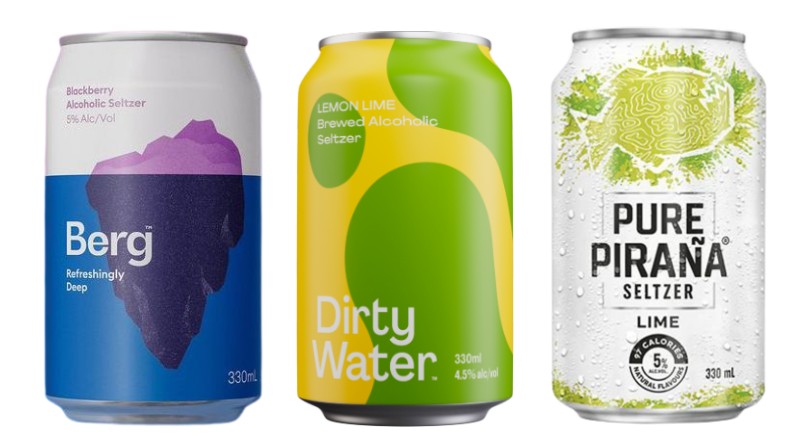 Greenhill is a New Zealand company based in Motueka, with three vodka-based seltzers on the market. The grapefruit version (pamplemousse is French for grapefruit innit) has an adorable moose on the can (geddit?), but we were not swayed by that because remember, #blindtasting. Alice Neville equated the aroma to posh fizzy drink San Pellegrino Pompelmo (that’s Italian for grapefruit btw) and on first sip, Leonie and Toby picked grapefruit as the dominant flavour. Leonie was reminded of trips to the Body Shop, with Sam feeling he could probably wash his hair with this beverage, “which is not a bad thing”. Alice found the taste “uninspiring but not unpleasant”, with Leonie saying, “I like it. It’s both sweet and dry, and tastes of a fruit of some kind, rather than the memory of a fruit like some of the others.”

Everyday Weekend is relatively new to the market, with charming can designs and a generous marketing team who sent food editor Alice Neville a cool chilly bag and cap. But none of that affected its place on the ranking, because, remember, #blindtasting. Owned by New Zealand booze company Premium Liquor, the Everyday Weekends come in four flavours. We thought this one smelled like feijoa lollies, with Alice N reminded of the fizzy feijoa Phoenix drink she sculled as a young’un. “I quite like that,” she said. Leonie equated it to watery Lothlorien feijoa wine and Eden French-Putu said “it flows down the throat”. “I’m into it,” added Alice W-L.

The only vino-based seltzer we tasted, LF is a Villa Maria brand made with Leftfield wines. The consensus with the pear and ginger, one of three flavours in the range, was that it was a touch sophisticated. “Smells like a sexy man,” said Sherry. “Gingery,” added Alice W-L, correctly, while Josie opted for “oaky”. “It’s a little bit more interesting,” reckoned Mark, with Josie adding, “It’s not trying to hurt you, like some of the other ones.”

This cider-based number gave us home-baking vibes, with Alice W-L comparing it to a ginger slice. Sherry reckoned it smelled like “my mate’s air freshener”, while Charlotte Muru-Lanning detected a creaminess. Alice N liked the fact it was bordering on spicy – “like a nice ginger beer, but watered down”. Josie compared it to kefir, with Sherry adding it felt good for her notoriously problematic gut. 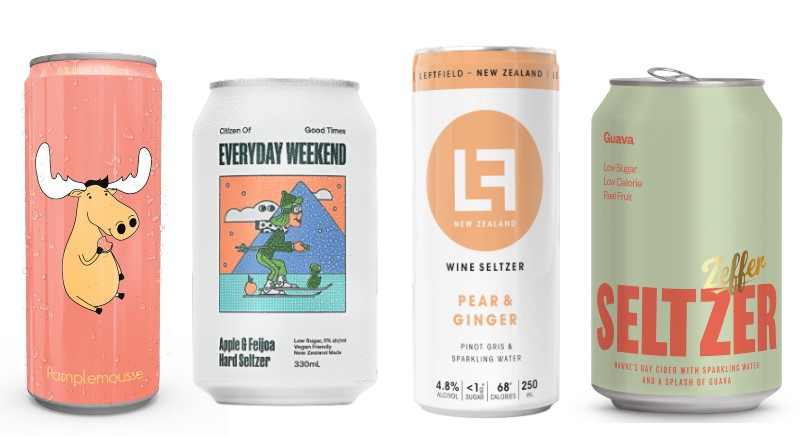 “Wow, this one has bits in!” was the immediate reaction to Greenhill’s second offering to make our top 10. Sherry thought it smelled like Raro and tasted “good”, while Joe Canham reckoned it was akin to a “sweet lemon with bits in”. Stewart and Leonie detected stone fruit, with Leonie enjoying the fact it had “some body to it”. This, as with Greenhill’s seventh-ranked seltzer, has more sugar, calories and booze than most of the other seltzers we tasted, but also tasted better than most. Coincidence?

The third brand to get a top 10 double placing, Berg comes in at number two with its watermelon flavour. For some reason, we were absolutely convinced it tasted like cucumber. Alice N found it “cleansing”, while Josie thought it tasted “healthy”. “I really like this,” said Alice W-L. “It makes me think I’m at a country club.” Charlotte (“classy”) and Sherry (“I feel like a hot tennis mum when I drink this”) concurred.

‘Twas a risky move for Garage Project to enter the seltzer space, potentially alienating its craft-beer-snob fans, but our taste buds are pleased they did. According to GP, Dirty Water is brewed from a gluten-free grain, fruit and natural flavours. The Raspberry Yuzu poured a delightfully subtle pink, and smelled and tasted like actual raspberries. “If you were to pour some raspberries into soda water, that’s it,” was how Michael put it, adding that it “all round ticks the boxes”. “It tastes more real,” said Stewart, with Alice W-L enjoying the fact there was no unpleasant aftertaste. “Quite refreshing,” said Alice N. “Not bad. Not bad at all.” 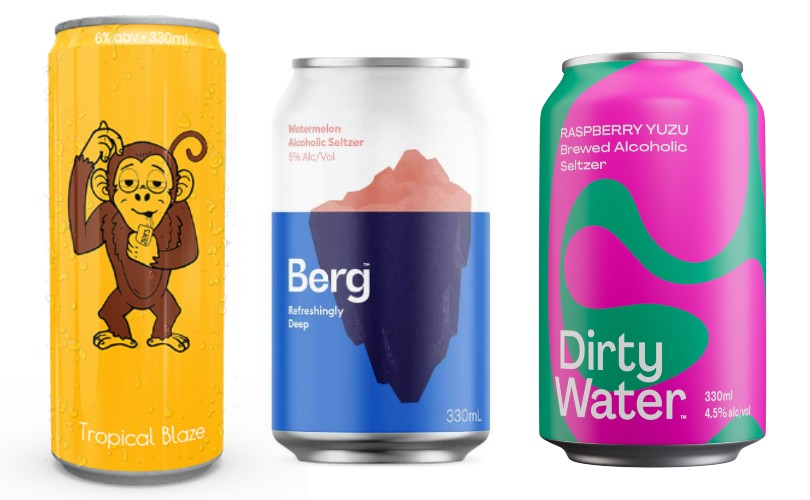 Other seltzers that were pretty decent (scoring above 5/10)

Subscribe via Apple Podcasts, Spotify or your favourite podcast provider.

A selection of tasters’ comments about the less successful seltzers

“I preferred having a Covid test up my nose than that smell.”

“I think this is what a Flaming Moe would taste like if you didn’t light it on fire. So just a Moe.”

“It tastes like flat watered down tonic water. Like the bottom of a G&T from several hours ago. Waste of time.”

“It smells like scented gel pens. I could sniff that all day.”

“This would melt hair in a drain. This is what they’d put on wounds in World War One.”

“The aftertaste is the burn you get after vomiting.”

“I’m instantly salivating so much but in a bad way. It makes your face convulse into a smile. No, a grimace.”

“It’s Tropical Just Juice on the nose and dry armpit on the palate.” 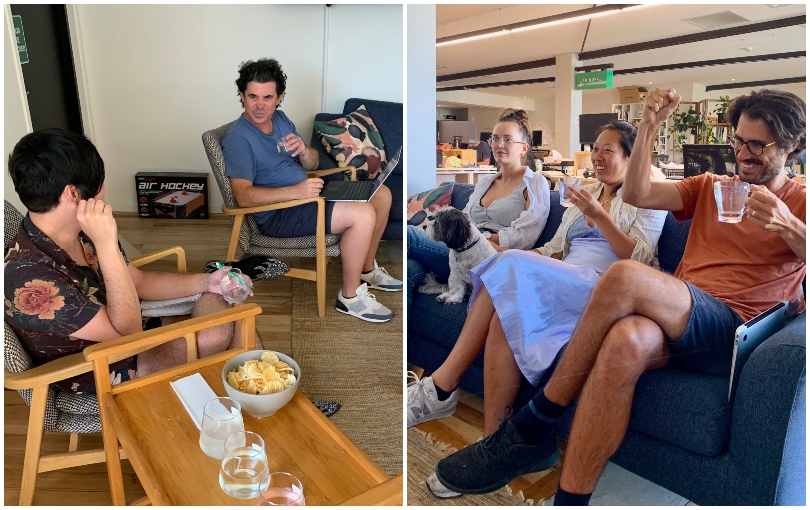 “It’s like something a parent would give a child so they wouldn’t touch alcohol again.”

“That has zero personality. If it was a person it would be David Seymour.”

“It would be the first person sent home on The Bachelor.”

“It’s stressing me out how bad that is.”

“It smells like when you mix a can of tuna with mayonnaise.”

“It feels like something Simone Anderson would take a lot of money to endorse.”