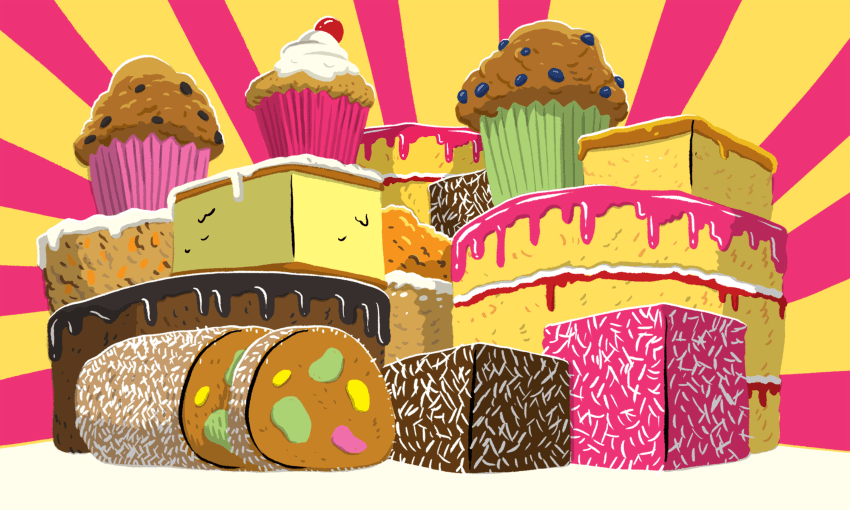 Good Bitches Baking and the sweet, sweet taste of kindness

Alex Casey talks to Nic Murray and Marie Fitzpatrick, co-founders of Good Bitches Baking, about changing the world, one cupcake at a time.

It began, like all good things, with a warm cheese scone. Nic Murray’s baby nephew was battling cancer and it was a traumatic time for her whole family. One afternoon, she spent lunchtime crying in the toilets at work. “It was one of those days where I genuinely thought I’d run out of the ability to be anything at all, that I’d never be able to pull myself together.” She went back to her desk, ready to turn her computer off and leave, too tired to face the rest of the day.

And there it was.

Resplendent and buttery, a warm cheese scone in a cold hard world. A free scone. A gift scone. A desk scone. The greatest scone of all. “To this day, I have no idea who put it there, but it was such a kind gesture – someone noticed I’d been distressed, and tried whatever they could think of to make me feel better.”

Her co-founder of Good Bitches Baking, Marie Fitzpatrick, has a similar treat touchstone. When her daughter was born very premature, she found solace in a simple cuppa in hospital.

If the cheese scone and the cup of tea planted the seeds for Good Bitches Baking, then it was a night of drunken shit-talking that gave it the necessary hosing to bloom. “There was a lot of depressing stuff happening around us,” Murray says. “In Wellington, there was a huge problem with homelessness and all the women’s refuges were having to turn people away.”

So she and Marie did what many do when they need to solve a problem: they turned to booze.

“It’s all very middle class and embarrassing, but we got hammered on pink bubbles and the conversation all night was us going, ‘Isn’t the world shit, why don’t we do something about it… baking is nice, we’ll make people happy with baking,’” Murray says, adopting a drunken slur. “We were sick of feeling helpless about the shit state of the world, so we thought we had to do something – even if it seems ridiculous, like baking someone a cake to make them happy. It’s better than doing nothing.”

They settled on a name – still drunk. Murray still stands by it. “I thought, ‘Well, you’re a good bitch, and I’m a good bitch, let’s call it Good Bitches Baking!” The next hungover morning, a Facebook group was made with 12 of their home baker friends. That was three years ago, with the group now boasting more than 1300 volunteers, 13 chapters nationwide and over 500,000 sweet treats lovingly baked and delivered to people in need of cheering up.

The weekly parcels of scones, slices, cakes and muffins reach people nationwide, from Women’s Refuge to homeless shelters, Rape Crisis support, local hospices, food banks, Canteen, post-natal depression support, Shakti groups and many more. “Really it’s just anywhere where there are people who are going through some sort of crisis or having a rough time,” Murray says. “We want them to know that life isn’t terrible, the world has nice people in it and those people care about them.”

A big, delicious, baking run might sound frivolous to some, and even enraging to those who love to spit about the perils of sugar, but all that matters to Murray and Fitzpatrick is the person biting into a delicious morsel in the midst of a bad time. “Someone who’s received baking from us at the Women’s Refuge sent us a message saying, ‘I burst into tears when I got your cake because I was so touched that someone thought I was worth it’” recalls Fitzpatrick. “That made me cry my eyes out.”

“It’s such a simple thing for us to make a cupcake but, for someone else in the world, a simple gesture saying ‘you’re worth my time’ can be quite overwhelming.”

Another grateful recipient of Good Bitches’ baking was a woman who was receiving cancer treatment in another town and was away from all her friends and family. “She said she got home and there was a plate of cookies on the bench. She told us, in that moment, she didn’t feel alone,” Murray says. “That made me cry – but it doesn’t take much.”

It’s not just about the people on the receiving end either – the weekend ritual of home baking for others has attracted thousands of bitches nationwide (that’s a gender-neutral term, by the way, and if you don’t like it, well, Murray says you can “get fucked”).

“Lots of our bitches say that one of the things they like is the practicality of it and the personal nature of it,” says Marie. “They’re in their kitchen and they’re thinking about the person who’s going to get the baking and being mindful of what they are going through.”

Both still working full-time jobs as contractors in communication and product design, Murray and Fitzpatrick squeeze in the running of Good Bitches Baking around their regular lives. “Managing is probably the better description,” says Marie. “We’ve been tired for three years.”

Late nights and sugar rushes aside, there have been some sweet lessons along the way. “It’s taught me that if you give people a way to connect to something, they’ll take it,” says Murray. “Yeah, to me it’s the fact that 99 per cent of us are good bitches at heart, but most of us need a little bit of help to get there.”

So what’s next for the bitch brigade? They have plenty of home bakers across the country, but there’s one thing they still need: money.

“We also want to start having bigger conversations with people about the power of kindness,” says Murray. “We’ve got 1300 baking volunteers now, so we’re keen to look at what else we could do to make a difference in the community.”

They’re also keen to find ways to appeal to people who don’t like baking, before tackling the most ambitious task of all: making New Zealand the kindest place on Earth.