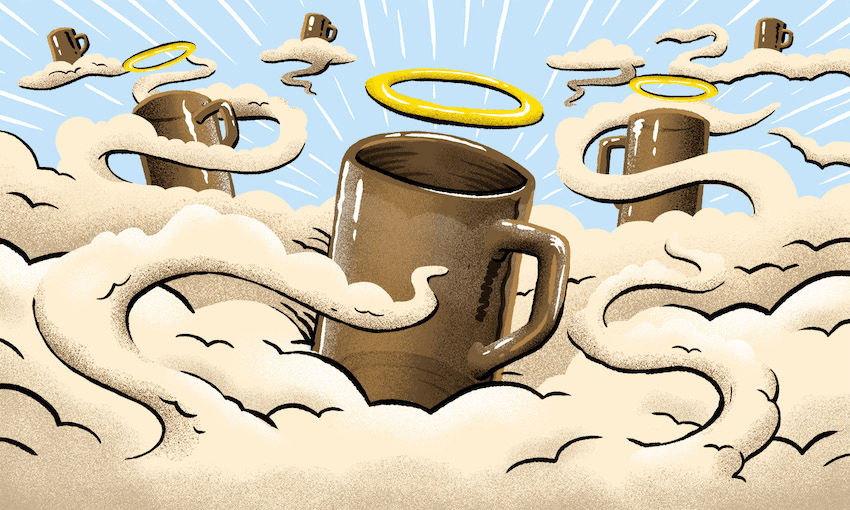 The people’s cup: How the Arcoroc mug took over New Zealand

Hard to break, cheap as chips, filled with instant coffee or weak tea – it’s the mug of the marae, the staffroom, the factory canteen, the church hall. It’s our mug, says John Summers.

Our son was born almost three months ago. He’s close by, fighting sleep in his bassinet as I write this. He came into the world, pink and screaming, after hours of labour in a rural hospital. I won’t pretend that any of the hard work was mine – I flustered around with an oil diffuser and the affirmative phrases we’d been taught in antenatal class – but still, I was exhausted too. The three of us sat together when it was all over, our emotions rolled out thin. As he peered at my partner and me with minutes-old eyes, the midwife bought us both hot drinks, the first smoko of that longest day, comfort welcome no matter how it came, and it came, of course, in smoked glass.

Those smoke-tinted glass mugs, the handle and cup all one single transparent piece. I describe them only because they aren’t always known by name. If they are though, it tends to be ‘Arcoroc mug’, for the French company that makes them. Officially they are the Fumer Coffee Mug, but it’s unlikely anyone says that out loud. Marae mugs is another thing I’ve heard them called. My first jobs were at places where the hours were punctuated by the thud of the time clock, and Arcorocs of weak tea and instant coffee drunk in dusty rooms. But even before that I knew them well, spotting them in my school staffroom, in church halls and at home too. We always had one in the cupboard. I’ve seen them since in club rooms, staff rooms again, and the highway-side tearooms where I’ve stopped on a long drive home. They are a part of the scenery.

David Mansbridge, a general manager at Southern Hospitality, an Arcoroc distributor, talked to me about their popularity. “The numbers sold, god, I don’t know, it would be thousands, heaps.” Their strength had much to do with this. Drop an Arcoroc and it will just as likely bounce as break. The glass is tempered, heat-treated to resist extreme temperatures.

“I don’t know if the colour made a difference,” he said. “It probably did.” They were also, he told me, as cheap as chips, popular anywhere where budget and strength were a priority: staff cafeterias, and factory canteens back when such a thing existed in this country. This conversation, you’ll notice, was in the past tense. Mansbridge was adamant they were behind us now. If I was seeing them still, it was because they’d survived. That tempered glass meant the purchases of earlier decades were with us for ever. But when I quizzed him on what they sold now, he checked his records. “So much for my knowledge,” he said, surprised. “We sell 30,000 a year.”

Mansbridge’s company was just one of several that distribute them here, and he put me onto Andrew Ashwin, general manager for the Oceania region at Arc International, the manufacturer. From an office somewhere in Sydney, Ashwin confirmed they still sold well in New Zealand but curiously there was a clear, tint-free version that was much more popular everywhere else. They sold very few of the smoked glass model in Australia, even as pallet after pallet came here. Why might that be? He didn’t know, and went to talk about a casserole dish that only the Japanese and Koreans were keen on. It tended to be a case of people buying what they were used to, he suggested. Those smoked glass mugs became what people reach for when they reach for a cheap, strong cup, and so it remains that way. But for that to be true, it had to have a first wave, some original attraction when it established itself in our preferences.

I thought of ‘Ten Guitars’, a song that has endured here, become part of the culture, but which elsewhere is only remembered, if thought of at all, as the B-side to Engelbert Humperdinck’s career-creating ‘Release Me’. It’s now acknowledged that the song’s message of coming together through music had a resonance for Māori feeling the dislocation of city life during the post-war urban migration. I wondered if there was something similar to be found in the history of the Arcoroc mug, some story about who we are, played out in our choice of crockery, and I hoped that with Ashwin’s help I could uncover that moment of arrival. He assured me he’d find out – it predated his time at the company by decades – and he was enthusiastic. It was if he’d been waiting for the day that someone would call from New Zealand to talk mugs.

But weeks went by without response, and when I called him, he told me he was chasing the French for information. I didn’t tell him that I had already sent several questions to Arc in France via their website, and had a reply from someone called Marjorie, assuring me that my message had been forwarded to the relevant people. “They will answer you directly fast,” she wrote. That was months ago.

More time passed. When I last spoke to Ashwin, he sounded tired. “The Fumer mug thing?’” he said, and suggested I send him an email. I began to suspect that his heart was no longer in it, that the French had been unreceptive, seeing us for some backwater, a convenient place to dump those mugs unwanted elsewhere. They do not, I note, feature anywhere on the Arcoroc website, which instead displays quirky beer glasses and Scandinavian-inspired espresso cups.

And so, I was left to my own, unqualified surmisings. Maybe that tint gave those otherwise utilitarian mugs the merest nod to style, brought a smoky European sensibility to coffee in the rugby clubrooms. Perhaps it was our bright light, our sun unfiltered by ozone that made us feel the need for something between it and our beverage. Or maybe this backstory was inconsequential, and any significance lay only in how ubiquitous this mug has become, so common that we see through it, smoke in the air, everywhere but nowhere, a holy ghost, dishwasher-proof and microwavable.

The other day a friend was telling me about his partner’s doctoral research, in which she asked people to identify which social class they belonged to. Some refused to answer, he said, surprised at how many were offended by the question, denying that such a thing as class existed in this country. That old notion of New Zealand as egalitarian persists – we think it is true because we would like it to be so, even as markers of class surround us. I don’t mean just the obvious things, the symbols of each end of the spectrum, the McMansions and the state houses, but all the small ways in which people stake out their position within the middle class, able to choose carefully where they live, what they eat and buy, giving greater and greater priority to complicated notions of taste. The problem of having things becomes one of having the right things.

I don’t pretend to be immune to this – I am a member of the middle class myself. Since those factory days, I have almost always worked in offices, where the coffee is ground, where sometimes there is an espresso machine even, and the mugs may not always match but are clean, new and ceramic, and seldom tempered glass. It is possible, I have seen, for people to surround themselves with objects that have been chosen carefully, to own no chipped or promotional mugs, nothing second hand but for that selected as antique or vintage.

Still, I believe it is impossible to completely avoid the Arcoroc mug. It is found in too many places, in “institutional environments”, said Ashwin, like schools or hospitals. Places that even the most carefully curated life must touch at some point. You might, for instance, be given an Arcoroc on receipt of some bad news, whether in or beside a hospital bed, and you’d wrap your hands around it, the warmth helpful somehow when you’re reeling.

This might seem a depressing thought. After all, why can’t we have beautiful things in our time of need? I should confess too that I had always thought of the Arcoroc as ugly, a dreary thing. And yet, I was happy when Mansbridge and Ashwin told me they are still popular, hard to break and never going away. That old egalitarian New Zealand was a myth. Ask anyone the slightest bit different from most. But it’s true, I think, that with fewer choices we once had more in common, more shared experiences. There are so many New Zealands now, so many ways to live, options that increase exponentially with money. Couldn’t it be a comfort, then, to know that there are some moments that come to us all the same, right down to the mug. Times when we sup, as they say, from the same cup.