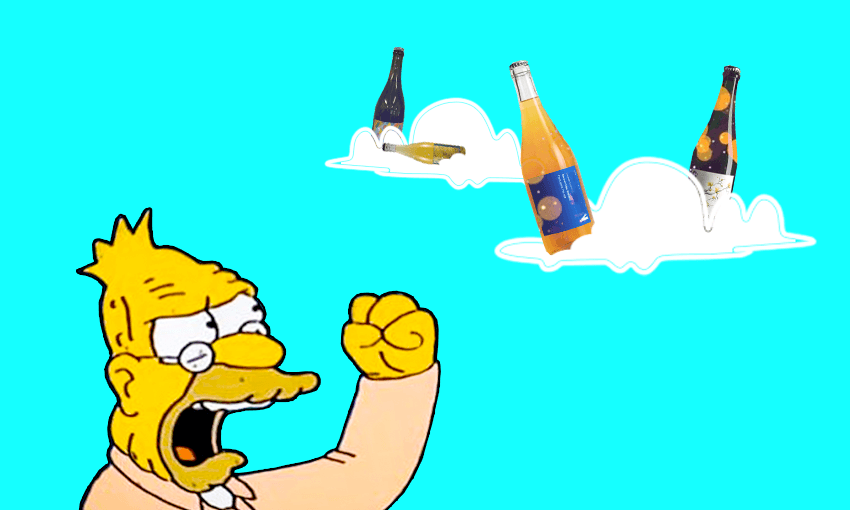 Sorry, winosaurs: your reign is crumbling

For years, the traditional wine establishment has been able to decree what’s good and what isn’t. Some of them can’t accept that that’s changing.

For those of you who do not keep abreast of wine news, here are some facts: Jim Harré, the chief judge of the New World Wine Awards and a wine consultant for Air New Zealand, went for dinner at Moiety Restaurant in Dunedin on Saturday. He ordered a glass of Ekleipsis Pinot Noir, a natural wine made by Jess Mavromatis. He did not like it. While dining, he emailed her this:

I am not going to write about the implicit sexism in the email (I highly doubt Jim would use the word “hobby” to describe a wine business owned by a man and, considering Mavromatis has a photo of herself on the homepage of the winery website, there is no way he was unaware of whom he was emailing). I am not going to address the profound lack of professional courtesy in this personal attack. I am not going to write about the fact the email was sent while dining, presumably after at least a glass of the offending wine (or whatever the replacement was). And I am not going to comment on the frankly pathetic backtracking where Jim stated that the email was just “personal feedback” despite making pains to point out he was “an international wine judge”.

What I am going to write about is the fact we have a person (an old, white, male person) who thinks that sending a belittling email is completely acceptable because he knows what wine should taste like and this upstart winemaker, obviously, does not.

I want to put my own conflicts of interest on the table here – my wine business Cult Wine sells Ekleipsis Wine and also sells wine (not Ekleipsis) to Moiety. But the issues that have been raised from this incident are far wider than any one person, wine, winery or restaurant.

Like many parts of the world, the wine world is changing, and for the better. Many behaviours that were previously acceptable are no longer such. Ironically, Jim, at least in print, seems to agree with me. In a 2019 article for New Zealand Winegrower, he states: “The idea of inclusiveness for young palates was not part of the culture back then. At least the bullying has largely gone today, which I think is a very positive thing”. If only that were true.

Natural wine is a huge part of the changing wine industry and there has long been outward contempt for natural wine from some parts of the traditional wine establishment both overseas and here in Aotearoa. Sam Harrop, a master of wine based on Waiheke, states on his website that natural wine “is – more often than not – faulty at its core”. This, too, is ironic as Sam is the co-founder of Matassa, a now-legendary natural wine estate in France and co-author of a book on natural winemaking. His comment is objectively untrue, unless you conveniently choose to define “natural wine” to exclude the vast cadre of winemakers that work naturally and make moving classic wine – Black Estate, Mount Edward, The Supernatural, Devotus and Herzog all come to mind. These conversations are now pretty old hat and I have personally seen winery owners go from telling me that it is “impossible” to make wine without added sulphur to doing so themselves in just a few years.

But Jim’s email goes even further than uneducated professional criticism. What I have never seen is the sort of vitriol directed at a single winemaker simply for making and selling a wine that someone did not enjoy: “You should be ashamed of yourself. Find a new hobby”.

Certainly, the product of the “modern wine” is vast swathes of homogeneity. Wine style is ruthlessly enforced by the fact the vast majority of wine made is sold through supermarkets and chain liquor stores, made by international winemaking consultants and marketed using wine show medals. Winemakers who all learnt how to make wine the same way at a small handful of winemaking schools around the world still gather together to bestow gold, silver and bronze medals on bottles of wine, judged not for any inherent quality but by how close they adhere to very narrow, outdated set of style guidelines. What you have is a very small group of people effectively deciding what consumers should be drinking.

But guess what? Some people want something different.

Natural wine is not a fly-by-night fad but a movement of winegrowers, retailers, restaurateurs and, most importantly, consumers who want to be challenged and inspired by the wine in their glass rather than smashing it down without thought (although this still happens). As Mavromatis points out: “The world would be pretty boring if we all liked the same things”. This is what proponents of mainstream modern wine cannot seem to comprehend. For years they have been able to decree what is good and what is not and thankfully, their reign is crumbling.

What frustrates me the most is that these dinosaurs cannot fathom that natural wine is good for the wine industry as a whole. Wine is under constant attack: from craft beer, from alcoholic seltzers and from the fact that people, especially younger people, are drinking a lot less or not drinking at all.  Natural wine has empowered thousands of new wine consumers in Aotearoa alone to pay handsomely for wine they love. We need these consumers and most of them, from what I can tell, drink a fair bit of conventional wine as well.

While the email sent to Mavromatis may have been a slap in the face to her as a winemaker and as a person, I am also affronted about what it says about the people who love her wines and natural wine generally. It says “I’m right, you’re wrong, drink what you’re told”. And that’s the way to lose customers, not gain them.

Jules van Costello is a wine professional, educator and writer based in Taranaki