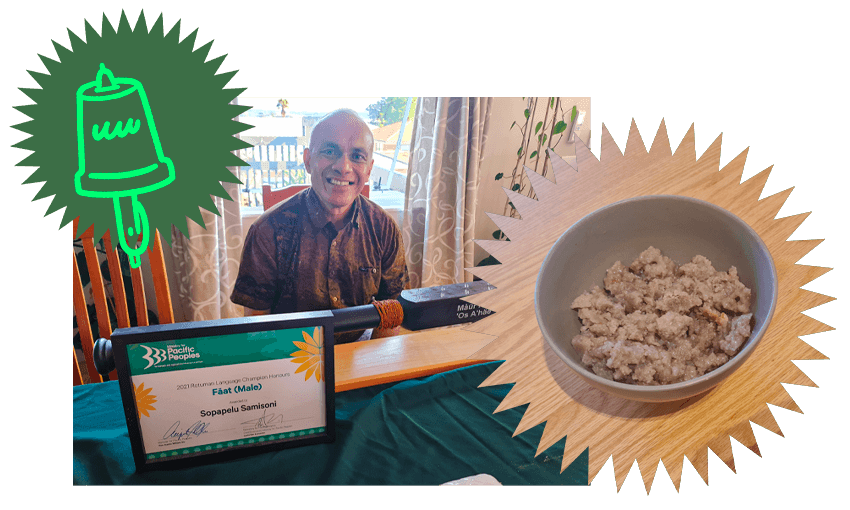 It’s the end of Rotuman language week and to celebrate, we’re sharing the recipe of a popular delicacy from that community that’s not your ordinary dessert.

If you were in Tāmaki Makaurau on Friday you may have noticed landmarks including the Sky Tower and Auckland Museum lit up in blue. The colour reflects the Fijian flag, and the event being marked was Rotuma Day, a celebration of the Rotuman minority group within the Republic of Fiji.

While Rotuma Day falls on May 13, it’s normally marked on the following Sunday with a combined church service followed by a huge Rotuman feast with one headlining dish. Rotumans say that if this dish is not on the table at any celebration, it’s not a true, traditional Rotuman event.

It’s called fekei [pronounced feh-kay] and earlier this month I met with a Rotuman living in West Auckland, Sopapelu Samisoni, to learn the process of making taro fekei (mara ma ‘a’ana) the modern way. Instead of using taro leaves to wrap the fekei in, we used loaf pans, and instead of cooking the fekei underground outside in an umu pit, we used a conventional oven.

There are around 25 different flavours of fekei such as banana or breadfruit (fekei ulu). Samisoni, a butcher by trade and last year’s Rotuman language champion, has been making fekei for over 20 years for families, friends and the Rotuman community back home and here in Aotearoa. He says it’s a beautiful reminder of home, his culture and language.

The theme for this year’s Rotuman Language Week, which finished yesterday, was vetḁkia ‘os fäega ma ag fak hanua – sustaining our language and culture. Throughout the week Rotumans rejoiced in prayer, songs and family activities, while practising phrases of the day that were posted online. For Rotumans, the week was not just a celebration of the richness of their language and culture, but a reminder of the dire need to ensure the language lives on. Rotuman is listed by Unesco as one of the world’s most endangered languages.

By sharing a recipe that has been passed down many generations, Samisoni hopes Rotumans will be inspired to share their own cultural knowledge, including their language, with their families to help revitalise and maintain Fäeag Rotuạm.

The taste of taro fekei reminds me of the popular Filipino dessert ube halaya, which is a flavour that now features in doughnuts, ice-creams and milkshakes across Aotearoa.

Preheat the oven to 200 degrees C on fan bake.

Peel the taro and then slice in half to make the grating process easier.

Combine the starch and 250mls of water and mix well. Add the rest of the water into the bowl and mix until the water has disappeared. Samisoni advises that you don’t want to put too much starch into your mixture as it’ll give the dough a hard texture, which is not what we’re after.

Pour the grated taro into the tapioca starch mixture and, using your hand, mix well until you reach a dough-like texture.

Add 1 cup of raw cane sugar to the dough and mix well. The mixing process can take up to 20 minutes. If you have a sweet tooth, add more sugar to taste.

Using a large spoon, fill each loaf pan evenly with the fekei dough.

Cut rectangle pieces of foil up to cover the top of each loaf pan. Paste one side of the foil with margarine and place the foil over the pans, margarine side down. Secure the foil down around the pan handles.

Place the two loaf pans on the middle rack of the oven and bake for two hours and 15 minutes.

When the fekei has baked thoroughly, it should be able to smoothly pop out of the pan.

Open up four coconut cream cans from the bottom, discard the excess water and pour the cream into a large, deep mixing bowl or stock pot.

Add both baked fekei into the stock pot and use a wooden spoon to combine the ingredients, mashing up the baked fekei with the coconut cream. Samisoni used an ‘ipesi, which is a special wooden stick carved especially for making fekei.

Add 1 cup of raw cane sugar to the baked fekei mixture and continue to mix well.

If taro is not your cup of tea, feel free to make banana fekei, using 1 bunch of bananas to replace the taro.