The range of meat-free snags available in Aotearoa is ever increasing, but which should grace your next barbie? We put 22 of them to the test to find out.

For a long time, vegetarian sausages were objectively bad. I, for one, am still scarred by the tasteless tubes forced upon me at barbecues as a vegetarian tween in the late 90s. Much time has passed since then, however, and an alternative protein revolution is upon us. Technology has advanced, allowing scientists to isolate the protein in a range of plants and create products with a more “realistic” (as in meat-sausage-like) texture, attracting more omnivores to dip their toes in the plant-based world.

Our contributor Amanda Thompson is one of those omnivores, keen to eat less meat for the good of the planet. So she tried a range of vegetarian sausages from her local supermarket, and was largely unimpressed. Some readers thought Amanda didn’t give vego sausies a fair go – she sampled only a handful, and is usually a meat eater, which some believed clouded her view.

So here at Spinoff HQ, we decided to do a more comprehensive tasting, with a panel comprising tasters of all different dietary persuasions – vegans, vegetarians, pescatarians, flexitarians and yes, a couple of full-blown omnivores. (For what it’s worth, our results were largely in line with Amanda’s – though we couldn’t find the elusive Tofurky Beer Brat, so that went untasted.)

The taste test was kindly hosted by the aptly named Kind Cafe, a very good and mostly vegan joint that happens to be right next door to The Spinoff office in Morningside, Auckland. Most of the 22 sausages we tried were sent in for free by the companies that make them; some we bought. We tasted only sausages that are available nationwide, either at a retail store or online. All were cooked in the Kind kitchen and tasted blind with no condiments or accompaniments allowed (yes, it was rough, but necessary).

The tasting panel consisted of Spinoffers Alice Neville, Catherine McGregor, Alice Webb-Liddall, Stewart Sowman-Lund, Calum Henderson, Natalie Wilson and Matthew McAuley, plus Kind’s manager, Cathie Cottle. We gave each saus a score out of 10, which we then averaged out to get the overall mark. Our top 10 are presented below. We’re not naming the sausages we weren’t so keen on, but have included some of our less flattering comments for your enjoyment. 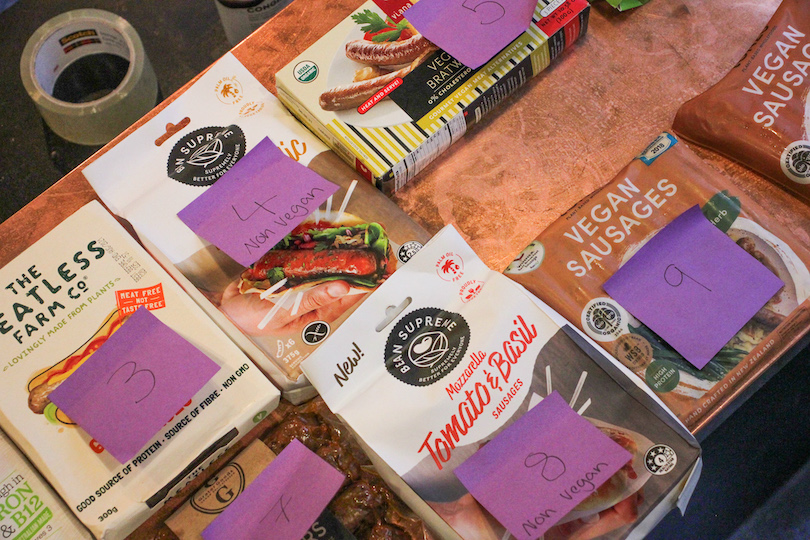 Some of the contenders (Photo: Matthew McAuley)

THE TOP 10, IN DESCENDING ORDER

$15 for four from Grater Goods; also available at selected retail outlets including Robinson’s

Made by Grater Goods vegan deli in Christchurch, this wasn’t the prettiest of sausages, with Calum Henderson saying it looked like something off the Bristol stool chart. Once the tasters recovered from that disgusting analogy, however, they were broadly positive. Stewart Sowman-Lund praised the sausage’s texture, saying it had “good fork feel” as he plunged in his pronged utensil. Other tasters were impressed by how much it looked like meat (which is not, of course, the measure of a good vegetarian sausage unless you want it to be). Cathie Cottle enjoyed the subtle smokiness of this snag, which, incidentally, was named the country’s best NZ-made vegan sausage at The Vegan Society’s awards last year.

This tofu-based number reminded us of the veg sausies of old; the kind you’d get served at a barbecue in the early 2000s, say – and that’s not necessarily a bad thing. Calum described it as a “real no-nonsense vege sausage”, adding: “It’s not blowing anyone’s mind but it’s not letting anyone down.” Cathie thought it would go nicely with a bit of sauce and some coleslaw, and Stewart agreed: “It’s nice. You have to remember that no one else in their right mind would eat just a plain sausage on a plate.”

$10 for six from Huckleberry, The Cruelty Free Shop and some supermarkets

The global juggernaut that is Linda McCartney Foods enters the top 10 with these stuffing-esque numbers. The texture was polarising, with some (Catherine McGregor, Stewart) describing it as “pretty impressive” and “really good”, and others (OK, just Alice Neville) opting for “gross”. It grew on her, though, and the other tasters were fairly positive, with Natalie Wilson saying it was like “if you juiced an onion in a juicer and built the pulp into a sausage”, which is not as bad as it sounds. “I don’t mind it,” she concluded.

These pricey snags come all the way from Seattle and immediately stood out for having “bits in” (eggplant and fennel and peppers etc, apparently). Wheat protein-based, they were particularly enjoyed by the meat eaters of the group, with Calum commenting on the “gristly texture”, and Cathie reminded of her nana’s meatloaf. Vegan Alice Webb-Liddall initially enjoyed the flavour, but then decided there was too much going on (that’ll be the aforementioned bits). $8-$8.30 for six from Commonsense Organics and New World

This one was rather pallid in hue, but tasted better than it looked. “It’s so squishy and wrong but I love it,” said Alice WL. “I think it’s yum.” Calum thought it had “huge stuffing vibes”. “As a fan of stuffing, I’m loving it.” Matt McAuley and Alice N didn’t enjoy the herb flavour, however. “Tastes like old dried herbs,” said Matt. “It’s kinda like a harsh rosemary or some such,” added Alice. “It doesn’t taste like any sausage I’ve ever eaten, but it’s nice,” concluded Stewart.

The vegans of the group (Alice WL and Natalie) abstained from tasting this controversial cheese-containing number, but the rest of us were fairly pleased with it. Calum said it was “lighter than air” and “like eating a cloud”, but then decided it was too soft to be a sausage. There was a lot of flavour in this snarler, a welcome change from the blandness we encountered with many of them, with Matt saying, “I’m not sure I like any of the flavour in it, but I appreciate that it’s there”. The fact it wasn’t dry was also praised, with Catherine saying “moistness wise, that’s pretty impressive”.

$8.79 for eight from Countdown

Originating in South Africa, Fry’s has been around for about as long as Linda McCartney Foods – ie yonks. These braii-style sausages (a braii, not to be confused with The Bulletin editor Alex Braae, is a South African barbecue) did not look appealing, it must be said. Cathie compared them to that sausage you left on the grill and forgot about until lifting the lid of the barbecue some weeks later. “That looks like the driest thing I’ve ever seen,” noted Matt, with Calum suggesting the sausage had been “mummified”. Things improved upon tasting, however. “Quite mushy, but not too bad,” said Alice N, with Catherine opting to have a second piece – a huge vote of confidence during a tasting of 22 sausages. “It would hold sauce very well,” added Cathie. A note to vegans: Natalie did not enjoy this sausage, finding it too meaty. Another non-vegan offering from Bean Supreme, of which the general impression was “quite nice”. Alice N liked the texture, saying “I prefer it to the ones that are trying to replicate meat”. Catherine was impressed with the moisture levels, while Calum enjoyed the “sun-dried tomato 90s nostalgia flavour” of the sausage, which brought to mind barbecue-flavoured Shapes. “It’s quite moreish. I would accidentally eat a whole packet of these,” he said. Stewart was the sole dissenter, feeling the tomato flavour was one dimensional and “lacked roundness”.

$10 for five from New World

Everyone was pretty impressed with this chorizo, praising the authentic (if we’re thinking of it as trying to be a meat sausage, anyway) casing that charred nicely, making it look appetising and locking in the moisture. “I got a nice burnt bit that tasted quite meaty,” said Catherine. Both this and the winning Craft Meat Co snag below contain hemp protein in addition to the more traditional soy-based protein.

An impressive showing from Dunedin company The Craft Meat Co, which took out the top two spots. The old English was one good-looking sausage, stealing the limelight from the also-rans it shared a tray with. Like its chorizo sibling above, it sported a very appealing casing that charred up beautifully. “Amazing that’s a vegan skin!” said Catherine. On tasting, we found it had substance as well as style. “The mouthfeel is incredible,” said Catherine. “You put sauce on that and you’d fool a meat eater,” said Cathie. “Juicy,” added Alice WL. “Almost the perfect sausage.” 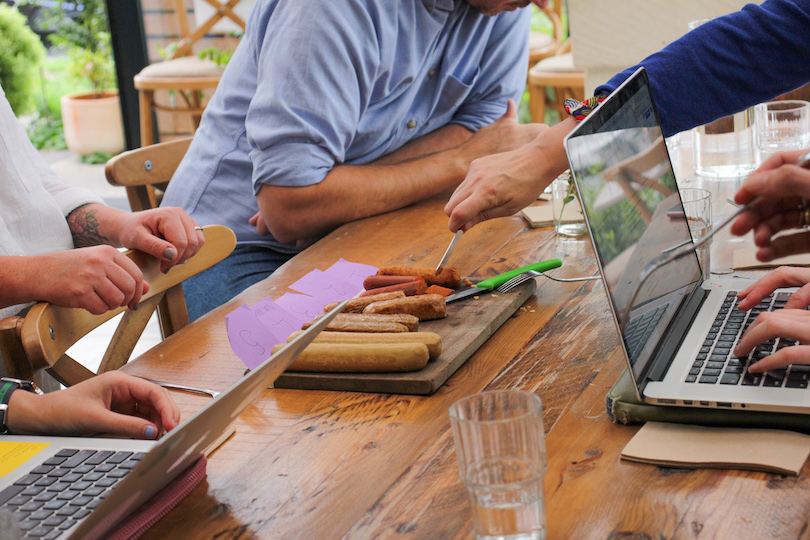 A selection of tasters’ comments about the less successful sausages

“This is remarkable in its tastelessness. It’s a real achievement.”

“It’s pasty. It multiplies in your mouth like a gremlin.”

“It’s removed all the moisture from my mouth.”

“This one really takes me on a journey. I’ve gone from loving it to hating it to loving it… or not.”