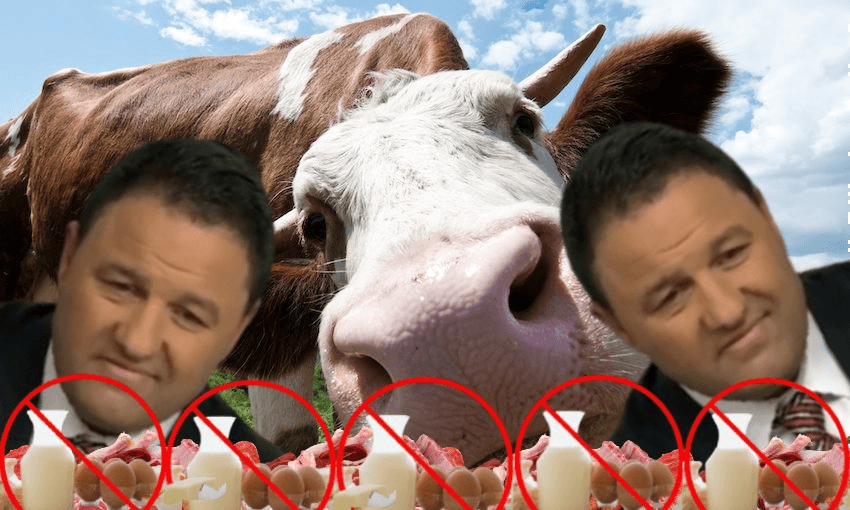 Hints for a happy, healthy vegan life as the AM Show host prepares to adopt a plant-based diet for the next 12 months.

In July, MediaWorks broadcaster Duncan Garner was very confident that come election time, Labour wouldn’t receive enough votes to govern alone. So confident that he said if they did, he would do something OUT THERE. Not that he’d eat his hat, or shave his head, or move to Stewart Island, or pash Mark Richardson, or apologise to those people in the Kmart queue – he said something he felt was even more outlandish. Duncan Garner said he would go vegan for a year.

In case you missed it, Labour received 49.1% of votes on Saturday, giving them 64 seats in parliament – the party’s biggest win in half a century. We were confident that as he’s an honourable man, a man of his word, Garner would not have allowed a single morsel of animal product to pass his lips since Saturday night. But on the AM Show this morning, finance minister Grant Robertson kindly offered to take him to legendary Wellington vego restaurant Aunty Mena next time he was in town, and Garner’s “hmm” in response made us wonder. Was he wavering?

We get it, we do. Cutting out animal products is hard. But last year, a bunch of us at The Spinoff went vegan for a week, and it was fine, really.

Some of us are even vegan full time. Woke freaks, without a doubt, but in this instance we urge Garner to listen to their kooky advice to ensure his 12 months sans animal products will be a piece of (vegan) cake.

Welcome, Duncan. Please, take a seat. Two days without swineflesh must have weakened your legs. Don’t worry. Chemist Warehouse is here for you.

Vegans are roughly divided into two camps: environmental vegans and animal rights vegans. They’re not mutually exclusive. Animal rights vegans won’t eat animals or their products (milk, eggs, honey) because they object to the physical and psychological harm caused to animals. Environmental vegans are interested in bringing down the agricultural complex ravaging the earth and the climate. There’s a lot of crossover.

Basically, if you’re an environmental vegan, you have to recognise that some vegan products are also the result of intense agriculture, or at least rack up the air miles. However, environmental vegans sometimes opt to eat honey from a local hive or eggs laid by their own rescue chickens. Animal rights vegans would say this is stealing from the animals. Like any other movement, there are sects and cults. Find yours. (You don’t have to care about animals. I’ve been vegan for three years and in that time I have punched four bees, kicked a monkey, and yelled at many dogs. Please don’t call the RSPCA, they all deserved it.)

The thing you’re going to notice first is how much you miss milk products. You can actually get withdrawal symptoms from cutting out cheese. It will take about three months to stop thinking about cheese, and then you will be repulsed by it. I can smell butter from five metres away now and it’s rancid. There are vegan cheeses. Give yourself time before you try them. Seriously though, some are great. Some are… not so great. Read the ranking.

You don’t have to lose weight. If anything, you can gain it on a steady diet of potatoes and vegan chocolate milk. Did you know that potatoes (possibly?) have all the nutrients a body needs to survive except vitamin D? Get some sun and you’ll be sweet, for a while at least.

It doesn’t have to taste bad. Forget the weird faux meats and focus on the fact that plenty of sugary, fatty treats are vegan. Bread is vegan. All Snackachangi chips are vegan. Dairy-free ice creams from Ben & Jerry’s and Little Island are godsends.

Tofu is really good. Coat it in cornflour and spices and fry it. Everything’s good fried!

You can still be a patriot: Marmite is vegan. Weetbix is vegan. We’re growing our own oat milk now, too.

Fake meat tips: don’t do it. There are some good plant-based “chicken” tenders out there (please note the nuggets from this brand are not vegan), but by and large when it comes to vegan food, imitation is not a form of flattery. I recommend the Better Burger mushroom burger when you’re getting a craving. *Ed’s note: Some people, such as Spinoff managing editor Duncan Greive, love fake meat. As you share a name, you may also love fake meat, but try it at your own risk.

You will not grow breasts. The rumour that phytoestrogens in soy milk will give you tits and turn frogs gay is not true.

You don’t have to be a good person. Morrissey is a vegan. Peter Singer is a vegan. I am a vegan.

Some vegan recipes for you to try: