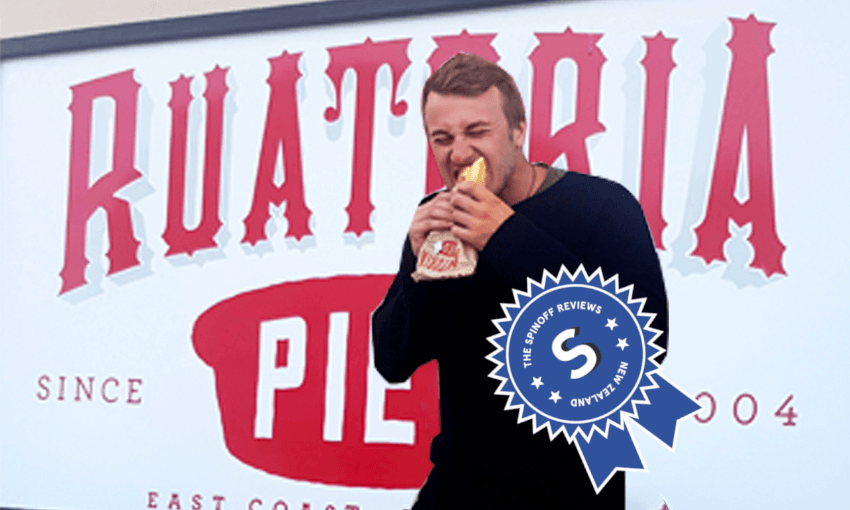 We review the entire country and culture of New Zealand, one thing at a time. Today, Don Rowe encounters New Zealand’s best steak and cheese pie.

The Steak and Cheese Index is the one true measure of whether or not a bakery is worth its crust. All establishments live and die by their flagship pie, and some few achieve transcendence. Ruatoria Pies takes it one step further still.

Far up the East Coast, where Rastafarians once burned churches to the ground deep in the throes of marijuana mysticism, Ruatoria has the sort of population you could count on two hands. The main street is bereft of ostentation. But behind a closed roadside door, magic happens.

Ruatoria Pies sits in the old Kiwi Tea Rooms, which have been in the Morice whānau since the late 1960s. Bobbi Morice, who owns Ruatoria Pies with her husband Pakanui Webb, bought the building as a way of creating employment so they might raise their children in the tiny East Coast town. They raised five. They couldn’t have known they’d also raise the bar for pies – worldwide.

All up and down the East Coast, easily New Zealand’s most underrated region, Ruatoria Pies can be found in warmers and ovens and backroom dairy freezers; from Tolaga Bay to Tokomaru Bay, Whakatāne to Wairoa. You’re unlikely even to spend more than a Sir Ed per pie. In the past week I spent much more, stuffing my face, covering my body in flakes and sauce, inhaling this most superb of pies. With that I bring you my thoughts:

Slid gently from a humble brown paper bag, the pastry of a Hikurangi Steak and Cheese is light, flaky, traditional, without veering into gluggy gas station territory. These are pies devoid of adornment – no poppy seeds nor mustard patterning. But that only belies the flavour inside.

The steak betwixt the crust retains depth, substance, weight. There’s no gristle, no grit, no golf balls of fat. This is steak like your grandfather ate it, just better. Gravy, to some an afterthought, takes centre stage. It’s thick, peppered, with considered viscosity.

Cheese, so often a tangy vinegar-plastic mistake, brings complexity to the steak, caressing it like a lover’s cheek. This is not your local bakery’s swill. There’s a playful intimacy here, where the flavours bounce off one another like playing tennis in the nude. And don’t get me started on that last, meaty bite. Is it any coincidence these pies were born in the epicentre of New Zealand’s cannabis trade? It’s hard to say, but I lean towards: no, it’s no coincidence. It’s a logical outcome.

I have been to the mountain(potato)top and her name is Hikurangi. But don’t take my word, ask Fiona:

Verdict: In a region as spectacular as it is remote, Ruatoria Pies are just one more reason to head east.